Alongside local acts like Daisy, Jerusafunk, and Romen Buffalo and The Loyal Order, touring groups like Washed Out and Big Gigantic brought the noise in the heart of downtown Phoenix.

Best Weather
After a week of gray skies and chilly nights in Phoenix, it was perfect springtime weather for M3F. The sky was clear and blue as a sapphire. On Saturday, a faint breeze blew in throughout the day, making things even better. The only downside? Not much in the way of shade structures to offer us relief from the sun. It wasn't hot out, but that sucker shone down bright and hard throughout most of the festival. God help the goths in attendance.
Worst Friday
Parking for the fest was a challenge throughout the weekend, but it was particularly maddening on Friday.
For the love of God, people, don't schedule a goddamn music festival in the middle of First Friday in downtown Phoenix. Finding a parking spot during a normal First Friday is bad enough.

Best Use of Onomatopeia
There are many, many reasons to love Phoenix Afrobeat Orchestra. The way lead singer Camille Sledge turns the band's name PAO into a percussive blast of POW-POW-POWs onstage is one of them. Most of the local bands at M3F like Jerusafunk and Wyves brought their A-game, but no one brought it as hard and as decisively as PAO. Playing in the middle of the afternoon to a small crowd, the grooves they were digging into onstage were so undeniable that there wasn't a single person standing still on that lawn. They raised the energy so high for the day that no act following them — save a touring headliner — could hope to keep it going.

Worst Cover
Magic City Hippies had the unenviable task of following PAO onstage. While the band was enthusiastic and quick to kick out the jams, the music they played was an uninspired mix of white boy funk and indie rock. They sounded like someone trying to digitally download the soul of the Red Hot Chili Peppers who pulled the plug after 10 percent finished uploading and said "fuck it, this will do." They tried to win the crowd back towards the end of the set with a cover of Amine's spare jam "Caroline" that was just embarrassing. You ever hear a white guy try to sound black while singing karaoke or repeating a stand-up routine they just watched on Netflix? It was exactly like that. 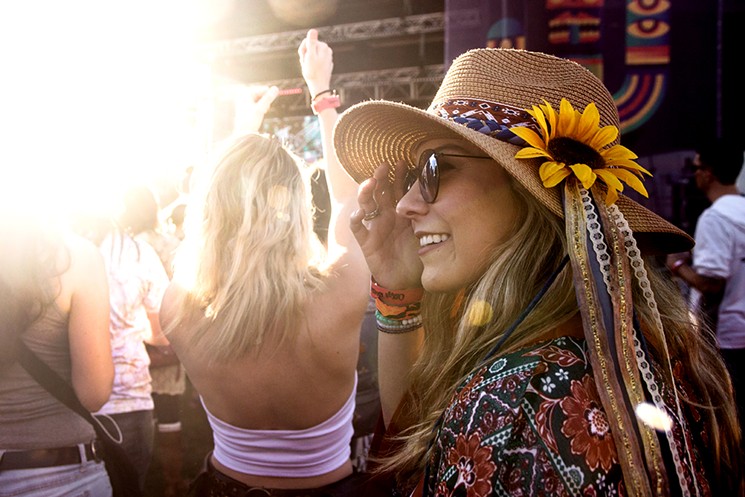 Many fans embrace spring with sunflower accessories.
Kelsee Becker
Best Festival Totem Pole
While the crowds at M3F weren't as huge as the ones at Lost Lake, festival-savvy squads still showed up with totem poles so they could find each other if they got separated. The best (and weirdest) of them had what looked like an inflatable baby doll wearing a cape with a penis jutting out of it. Kind of odd, but hey, you do you, Stiffy Baby Squad.

Best Wrestler Lookalike
Shout out to the shirtless dude wearing American flag tights who looked like WWE superstar Dolph Ziggler. On second thought, that may actually have been Dolph Ziggler.

Best Bad Actor Lookalike
Shout outs are also in order for the gentleman decked out in purple who was a deadringer for The Room auteur Tommy Wiseau. It ain't easy looking like the lovechild of Fabio and Skeletor.

Best Pat-Downs
Metal detectors, pat-downs, and bag checks are a pain in the ass. Props to the security team at M3F. The lines to get in flowed quick and smooth this year.

next
KEEP PHOENIX NEW TIMES FREE... Since we started Phoenix New Times, it has been defined as the free, independent voice of Phoenix, and we'd like to keep it that way. With local media under siege, it's more important than ever for us to rally support behind funding our local journalism. You can help by participating in our "I Support" program, allowing us to keep offering readers access to our incisive coverage of local news, food and culture with no paywalls.
Make a one-time donation today for as little as $1.
Ashley Naftule