U.K. rock band The Darkness is scheduled to perform on Saturday, March 12, at Marquee Theatre in Tempe. Simon Emmett
This weekend is as good a time as any to get out and see a show. The weather’s nice, skies are clear, and plenty of noteworthy concerts will be happening during the three-day span of Friday, March 11, to Sunday, March 13, including a few in the great outdoors.

If you like rock, The Darkness and Kaleo are all due in town. If country’s more your speed, the Eli Young will be performing on Friday night at Wild Horse Pass Hotel & Casino in Chandler. For those who’d like to hang out with some flightless birds, enjoy carnival rides, and watch outdoor performances, the annual Chandler Chamber Ostrich Festival runs the next two weekends.

Details about each of these shows or music events can be found below. And be sure to check out Phoenix New Times’ online concert calendar for more gigs this weekend.

Also, be aware that despite COVID-19 case numbers dropping significantly in recent weeks, many venues are still mandating proof of vaccination or a recent negative test result to attend concerts. Be sure to check ticketing websites before you go to keep abreast of entry requirements. 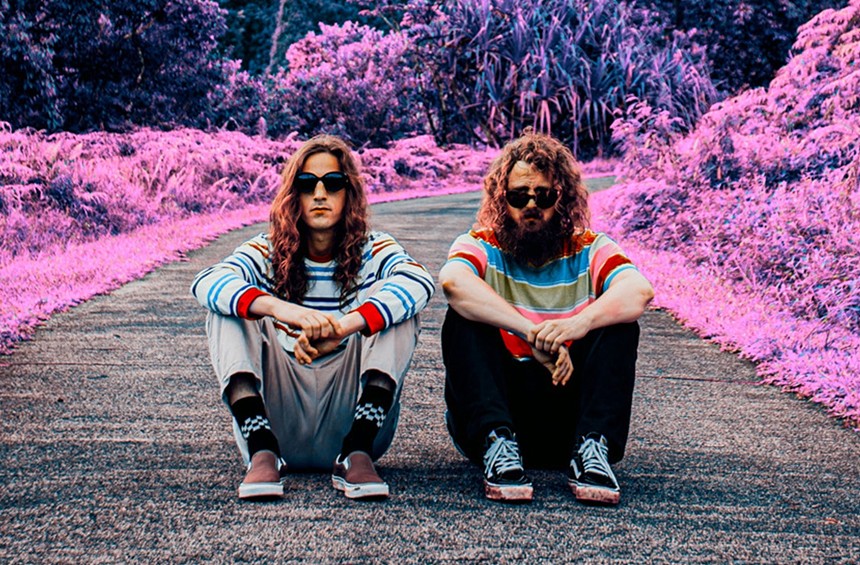 Hippie Sabotage at The Van Buren

Hippie Sabotage is an EDM duo that comprises Saurer brothers Kevin and Jeff. They first earned attention after their remix of Tove Lo's "Habits (Stay High)" racked up almost a billion views on YouTube and have paved their own way ever since. Projecting confident swagger, their sound is a mix of hip-hop flourishes and chill grooves that gets crowds moving. The Saurers' performances seem as interactive as you can get. Kevin spends time roaming among the crowds and both of the brothers appear to be having a lot of fun, recognizing that part of their success so far is based on their connection with people beyond the music. They’re due in the Valley on Friday, March 11, for a performance at The Van Buren, 401 West Van Buren Street. Doors are at 9 p.m. and Daisy Guttridge opens. Admission is $29 to $33. Tom Murphy

Gather around everyone ... Let me tell you a story about a famous person. Everyone knows her by her nickname: La Chona. She goes out dancing every night and buys herself a bottle, attracting a dance partner right away. People cheer as she moves, and nobody dances quebradita better than her! Those are the translated lyrics of what is probably the most infectiously popular Mexican song of all time, up there with La Cucaracha and La Bamba. Like the band that made her famous, the song La Chona is fun, flashy, and full of life. Los Tucanes De Tijuana is a Mexican band that is now based in Los Angeles, California, but with origins in the Mexican state of Sinaloa as well as their namesake, Tijuana. To say that they are a party band is a great understatement. They embody the party with every note, lyric, and dance move and will do so on Friday, March 11, at Arizona Federal Theatre, 400 West Washington Street. The show is at 8 p.m. and tickets are $53.50 to $253.50. Marco Torres

What started as two friends from the University of North Texas — Mike Eli and James Young — getting together to play songs in Denton, Texas, around the turn of the new century has become one of the top country music acts in the nation. Known for their roots-rock guitar playing and deeply meaningful lyrics, the Eli Young Band has released four albums that all ranked highly on Billboard’s Top Country Album charts. The band returns to the Valley on Friday, March 11, to perform in the showroom at Wild Horse Pass Hotel & Casino, 5040 Wild Horse Pass Boulevard in Chandler. Showtime at 8 p.m. and tickets are $35 to $65. David Fletcher

The scene at the Chandler Chamber Ostrich Festival.
SLE Entertainment

The music festival season is upon us, but that doesn’t mean you can’t mix it up a bit. Check out this year’s Chandler Ostrich Festival at Tumbleweed Park, 745 East Germann Road in Chandler, which kicks off its two-weekend run from Friday, March 11, to Sunday, March 13. Start by visiting the ostrich exhibit and then head for the event’s other highlights including more than 40 rides, including classics like carousels and Ferris wheels, plus animal, art, science, and circus attractions. There will also be outdoor concerts headlined by big-ticket artists each night. The schedule will include Uncle Kracker and The Band Perry on March 11; Walker Hayes on Saturday, March 12; and Flo Rida on March 13. Tickets are $15. Lynn Trimble and Benjamin Leatherman


Kaleo at The Van Buren

This quartet quickly dominated the charts in Iceland shortly after the release of their debut album in 2013. Since then, Kaleo jetted off to the United States and made Texas their new home to not only immerse themselves in the American music that’s influenced their sound but to explore the wide-ranging cultures in the states. Their music reflects their travels and is steeped in rock ‘n’ roll, blues, and Americana. Their current album, Surface Sounds, was released last April and has charted across the world, including the Billboard 200. They’re scheduled to perform at 7 p.m. on Saturday, March 12, at The Van Buren, 301 West Van Buren Street. Tickets are $42 to $47. Mikel Galicia


The Darkness at Marquee Theatre

U.K.-based rock act The Darkness made an enormous splash with its 2003 debut album, Permission to Land, which featured the hit single “I Believe In a Thing Called Love.” The band’s brash and theatrical performance style and music sounded like they could have existed alongside bombastic '70s rock bands like Queen and AC/DC. But bassist Frankie Poullain has stated that he and lead vocalist Justin Hawkins bonded over their love of '80s and early '90s alternative bands including My Bloody Valentine, Suede and the Smiths. And it’s that unexpected depth of influences, not to mention their spirit of over-the-top fun, that have separated The Darkness from other bands that have tried to mine the sound and spirit of the classic rock era. They’ve released a half-dozen other albums since then, including 2021’s Motorheart, and are scheduled to perform at Tempe’s Marquee Theatre, 730 North Mill Avenue, on Saturday, March 12. All-female rock band The Dead Deads open the 8 p.m. show. Tickets are $30.50 for general admission and $40 to $50 for balcony access. Tom Murphy

Roger Clyne and the Peacemakers are an Arizona treasure.
Ash Ponders

Roger Clyne and the Peacemakers at Mesa Amphitheatre

Say what you will about Roger Clyne's talents (which are substantial), when it comes to instigating a party, the native Arizonan is skilled. The stories surrounding the raucous Refreshments shows he was a part of back during the Fizzy Fuzzy Big & Buzzy days have been trumped by the kind of off-the-hook wingdings he hosts as frontman for the Peacemakers. (The tequila-soaked "Circus Mexicus" beach blast held in Puerto Peñasco draws thousands of Peaceheads every year, for instance.) Suffice it to say, RCPM's outdoor show on Saturday, March 12, at Mesa Amphitheatre, 263 North Center Street, will be just as lively. Clyne and company are likely to perform their typical high-energy set featuring “Mekong,” “Nada,” and (of course) “Banditos.” Gates open at 7:30 p.m, and singer-songwriter Wade Bowen opens. Tickets are $63. Benjamin Leatherman
KEEP PHOENIX NEW TIMES FREE... Since we started Phoenix New Times, it has been defined as the free, independent voice of Phoenix, and we'd like to keep it that way. With local media under siege, it's more important than ever for us to rally support behind funding our local journalism. You can help by participating in our "I Support" program, allowing us to keep offering readers access to our incisive coverage of local news, food and culture with no paywalls.
Make a one-time donation today for as little as $1.