A Roundup of the Best Guacamole in Phoenix The Mission's guac rocks! Allison Young
Forget avocado toast: The avocado's true raison d'être is guac (obvi!). The sublime yet simple dip, at once creamy, chunky, salty, acidic, rich, and vibrant, is pure green gold — made even more valuable during recent shortages of the Mexican import. From classic versions to creative riffs, here are nine of Phoenix's guacamole standouts.

The tableside guacamole at The Mission is a spectacle to savor.
Allison Young
The Mission
3815 North Brown Avenue, Scottsdale, 480-636-5005
7122 East Greenway Parkway, Scottsdale, 480-292-7800
The Mission doesn’t just serve guacamole; it serves up an experience. Your server wheels out a cart containing all the greatest hits — small dishes of diced tomato, jalapeño, red onion, fresh garlic, sea salt, lime, chipotle purée, cilantro, cotija, and toasted pepitas — and crafts the guacamole tableside to your liking and heat level. Watch the spectacle as the avocado is scooped, mashed, mixed, limed, and seasoned — all for you — and enjoy a bright and balanced finale that’s more than the sum of its parts. Bacanora dusts its guac in crushed chiltepin peppers.
Allison Young
Bacanora
1301 Northwest Grand Avenue
602-612-4018
Everything at Bacanora, chef Rene Andrade’s hip corner spot on Grand Avenue, has a distinct point of view, from the traditional piñatas floating above the six-seater bar to the flamingo-pink wall that boasts the neon yellow “Bacanora” sign — and the Sonoran-inspired guacamole is no exception. A sublime mix of avocado, lime, onion, cilantro, and a generous spattering of cotija cheese, the balanced combo is ignited by a red-hot dusting of crushed chiltepin peppers, a tiny, round chile with a burst of fruity heat native to the Sonoran Desert; Andrade gets the peppers from his family’s south-of-the-border ranch. This is the kind of guac you close your eyes to eat, the kind the table next to you orders as soon as they see yours. Points also go to the accompanying tortillas — half moons flame-kissed over the mesquite fire — and the locally made ceramic tableware it’s all served on. You will ask for a refill of the better-than-Doritos chips at Renata’s Hearth.
Allison Young
Renata’s Hearth
2400 East Missouri Avenue
602-954-2507
Let’s start with the chips at Renata’s Hearth in the Arizona Biltmore. Like dignified Doritos, these tempting, triangular crunchers look like the Frito-Lay favorites and invite the same finger-licking finish, but their coating is less a slap in the face and more a subtle dusting of smoky paprika. (Same satisfaction without the neon afterglow.) Freshly made and fantastic on their own, they're even better when paired with the fresh guacamole, a heavenly, hearty blend of Hass avocados with just the right hint of charred tomato, cilantro, red onion, and lime. The creamy, crunchy combo is addictive. Match it with a Los Muertos — Renata's signature smoked cocktail with serrano-infused blanco tequila, activated charcoal and lime juice that’s delivered in a smoke-filled cloche — and soak in the enchanting, romantic setting. 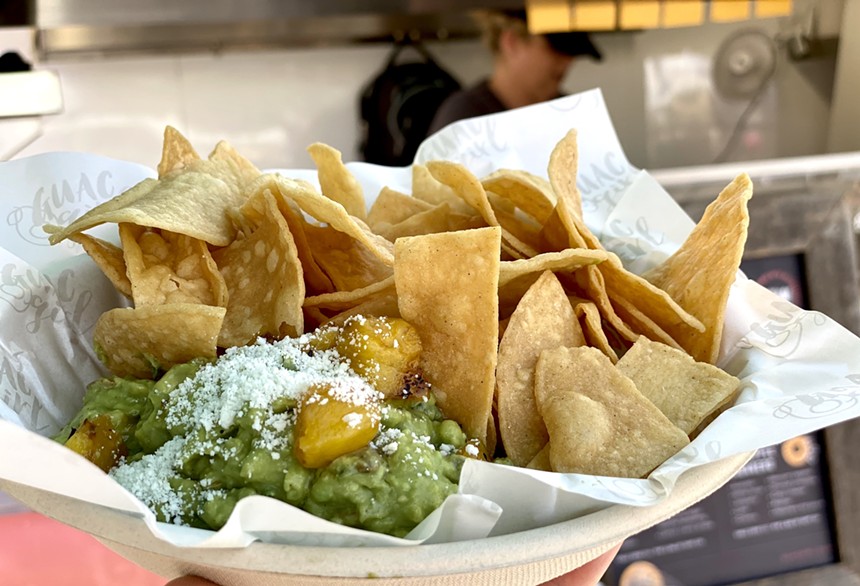 The only thing on the menu at Guac Girl food truck? Guac (duh!).
Allison Young
Guac Girl
Food truck
You may have spotted a pretty pink trailer with avocado illustrations at the farmers' market. That’s Guac Girl, a food truck that serves only — you guessed it — guacamole. Available in four fabulous flavors — pomegranate and pepita, pineapple habanero, bacon and honey, and everything bagel — each made-to-order guac highlights unique ingredients, such as grilled pineapple, hot honey, pork rind crumble, everything bagel seasoning, and lemon crema drizzle for a taste-and-texture party on a plate (or available by the pint with a bag of chips). The girl behind the guac is Kristen Esposite, an avocado aficionado who lives by the motto “Who doesn’t love guac?” Gallo Blanco’s guacamole adds sweet orange segments for a blast of brightness.
Allison Young
Gallo Blanco
928 East Pierce Street
602-327-0880
The guacamole at Gallo Blanco has long been a must-order. The signature chunky guac delivers just the right combo of avocado, red onion, serrano peppers, fire-roasted tomatoes, salt and lime, but what really seals the deal is the addition of sweet orange segments, juicy bits that add a blast of brightness before the whole thing is sprinkled with salty cotija cheese. The accompanying chips are thin and delicate, never greasy, the better to let the green stuff shine. Pair it with a house margarita or Paloma — everything here is made with fresh juices — for a double dose of citrus. Barrio Café’s “world famous” guacamole pops with pomegranate seeds.
Allison Young
Barrio Café
2814 North 16th Street, #1205
602-636-0240
The secret to Barrio Café’s “world famous” guacamole isn’t all that hush-hush. The special ingredient is pomegranate seeds — plenty of them — and they’re displayed loud, proud and in living color, turning the side dish into a sophisticated standout. Generously piled on top, the scarlet seeds don’t just add pops of color; they also add a sweet burst of crunch that plays off the ripe avocado’s creamy mouthfeel. And shout-out to the accompanying chips: The thick-cut, half-moon tortillas provide the perfect landing pad for the pomegranate-studded star. In fact, ask for more. The fried guacamole at The Coronado is a deep-fried feat.
Allison Young
The Coronado
2201 North 12th Street
602-767-8133
There’s no technique needed to eat the fried guacamole at The Coronado, but plenty goes into making it. The vegan hotspot in Phoenix’s cozy Coronado neighborhood takes traditional guacamole, an avocado-lime affair laced with fresh garlic, cumin, and pico, and coats it in a hefty dose of panko breadcrumbs, then flash-fries it to golden-brown perfection. The finished dish is a nacho-esque plate of stacked, freshly made corn tortillas drizzled in housemade cilantro-lime sauce and spicy chipotle San Jose dressing, capped by the star of the show: a ball of avocado awesomeness that’s crunchy on the outside and cool in the middle. A dollop of peanut chili oil elevates Chantico’s guacamole.
Allison Young
Chantico
1051 East Camelback Road
602-699-3015
Chantico is a whisk-you-away kind of place. Taking up practically an entire block on Camelback, the impressive indoor-outdoor space and its dramatic open-air bar and patio atrium transport you to buzzy Mexico City or beachy Tulum. The guacamole, however, is an understated affair, a simple yet stately plate of sumptuous avocado garnished with radish slices, cilantro sprigs, and a lime slice. It also comes with a flavorful flourish of finely chopped pico and a robust peanut chili oil that you can add in as you like. Freshly made chips arrive with a pairing of tomatillo and smoky tomato salsa — divine dips in their own right. 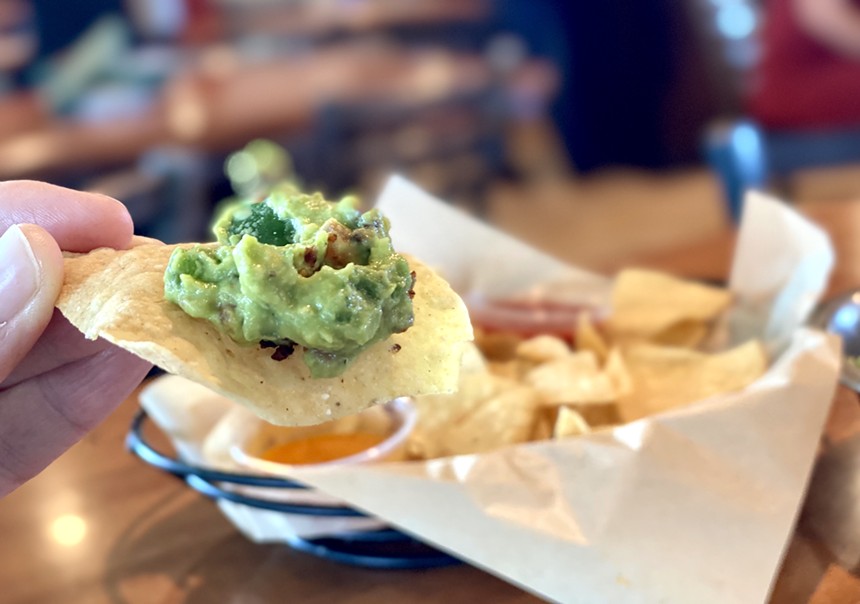 In a bacon mood? Add jalapeño bacon to Cocina Madrigal’s house guacamole.
Allison Young
Cocina Madrigal
4044 South 16th Street
602-243-9000
It’s easy to get carried away with the guacamole at Cocina Madrigal, a lively South Phoenix spot at 16th Street and Broadway Road. This isn’t just the perfect combination of avocado, jalapeños, cilantro, fresh lime, red onion, and tomatoes with a satisfyingly creamy and chunky taste; it’s also a choose-your-own-adventure affair that gives you the option to add roasted serrano, caramelized pineapple, and jalapeño bacon. But while your mouth might be screaming yes, yes, yes, adding all three at once cancels the others out — the caramelized pineapple cuts the crunch of the bacon, for example — so start with just one to truly appreciate each add-in. The chips come out warm, with a tomato-onion-cilantro salsa that pops with freshness. Pro tip: Ask for a side of the carrot habanero salsa for a walk on the spicy side.
KEEP PHOENIX NEW TIMES FREE... Since we started Phoenix New Times, it has been defined as the free, independent voice of Phoenix, and we'd like to keep it that way. With local media under siege, it's more important than ever for us to rally support behind funding our local journalism. You can help by participating in our "I Support" program, allowing us to keep offering readers access to our incisive coverage of local news, food and culture with no paywalls.
Make a one-time donation today for as little as $1.