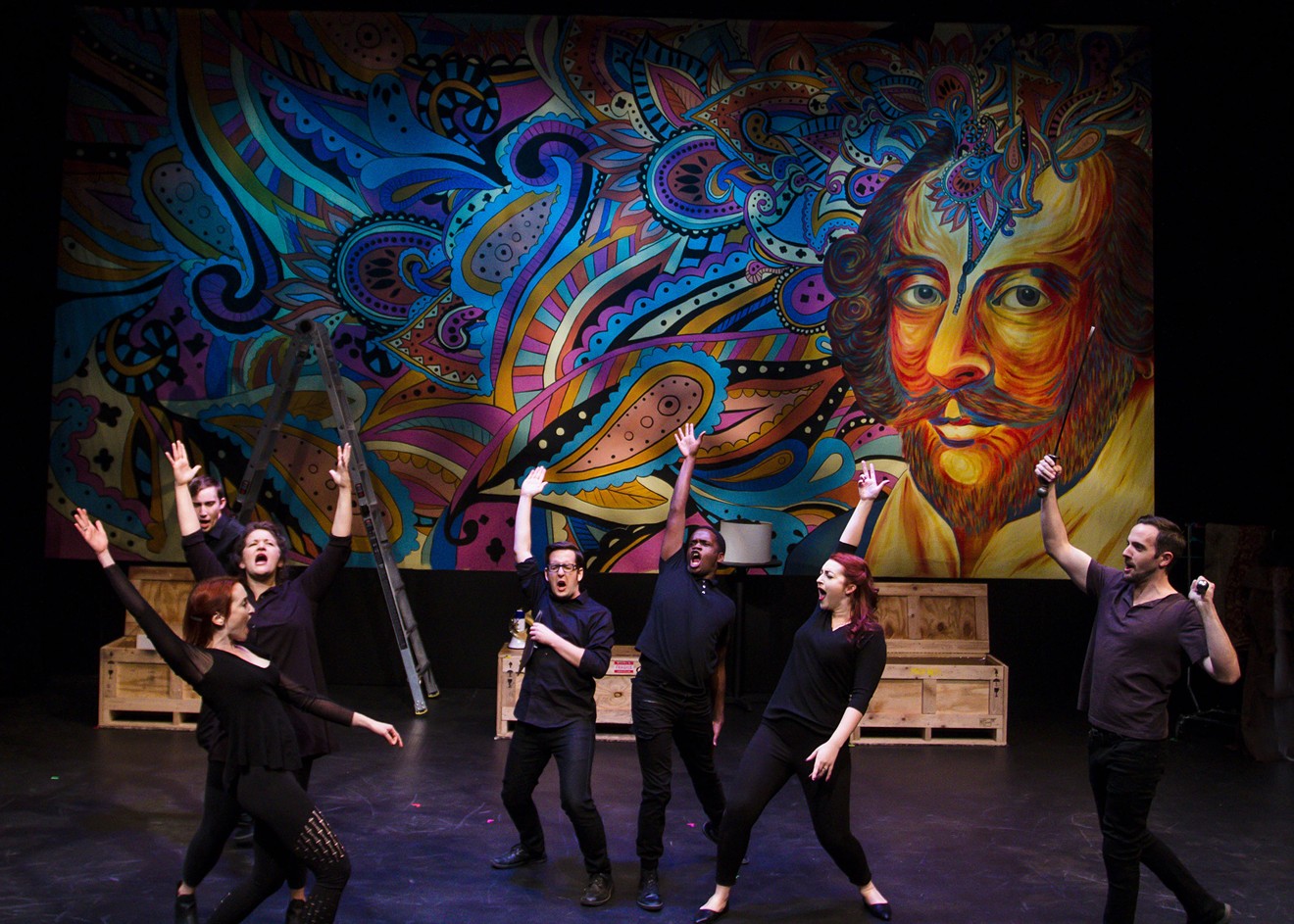 Sh#!tfaced Shakespeare runs until December 31 at the Phoenix Theatre. Reg Madison Photography
“To be or not to be.” But first, let’s take a shot.

This is how Phoenix’s latest delve into the world of Shakespeare operates. Sh#!tfaced Shakespeare takes three classics from the Bard — Romeo and Juliet, Hamlet, and Macbeth — and douses them in alcohol. The plays, now known as Macbooze, R&J, and Macbeth, follow the same storylines, but they’ve been updated, modernized a bit, and include a lot of room for improv. The script acts as a foundation, but the cast and crew work out a lot of the smaller details.

On top of all of that, one of the cast members, on a rotating basis, takes a few shots — onstage — before the performance begins, and the audience gets to see the crazy results.

“It’s kind of a mixture of taking a William Shakespeare play with that Drunk History theme and then adding improv à la Saturday Night Live,” Daniel Davisson, the producing artistic director, explains. “It provides an uncontrollable, zany, off-the-wall bit for the rest of the cast … while this other character can go off and have a fun night.”

The audience gets in on it too: every show, they invite an attendee to come up onstage and enjoy a shot with the cast member. Davisson explains that this audience participation adds authenticity.

To make sure the actors aren’t too drunk, they test their limits and tolerance during the rehearsal process. Davisson claims the shots typically don’t affect them that much.

“They have fun with it, it’s a very safe and open environment with the actors, so they all feel very controlled,” he says. It wouldn't be Sh#!tfaced Shakespeare without the all-important shots.
Reg Madison Photography
The idea for the show came from similar ideas being tried out in New York's theater scene, as well as the Comedy Central TV show Drunk History, where inebriated comedians tell historical tales that are then dramatized by actors, beer belches and all. For the Arizona show, they wanted to see how they could improve upon what they’d already seen.

“Make it a little more theatrical, not so much of a frat party as some of the other ones have seemed to be,” Davisson explains. “Much more of a real classic work of theater with this uncontrolled aspect to it.”

Davisson considers Shakespeare the father of theater and points out that a lot of his works had plenty of fouls language and references to alcohol.

The show also delves into satire and political commentary. The cast’s homework is to keep up to date with the news and watch Saturday Night Live to help keep the show organic.

“If next week there’s some big political scandal, you’ll know for a fact it’s going to be referenced somehow as a joke in the show,” Davisson continues.

Davisson sees the show as a release valve for stressed theatergoers. People can come and laugh, get offended, and laugh again as the show pokes fun at everything.

“It’s almost escapist theatre where we’re allowing you to let things go and forget about this world we live in,” Davisson says. “Our times that we’re living in kind of call for any reason to escape things.”

Sh#!tfaced Shakespeare. Through December 31 at the Judith Hardes Theatre at Phoenix Theatre, 1825 N Central Avenue; 602-254-2151; 602-254-2151; blkboxphx.com. Tickets are $34 to $47. For showtimes and ticket info, see blkboxphx.com.
KEEP PHOENIX NEW TIMES FREE... Since we started Phoenix New Times, it has been defined as the free, independent voice of Phoenix, and we'd like to keep it that way. With local media under siege, it's more important than ever for us to rally support behind funding our local journalism. You can help by participating in our "I Support" program, allowing us to keep offering readers access to our incisive coverage of local news, food and culture with no paywalls.
Make a one-time donation today for as little as $1.