We all had a hard week last week watching the Suns lose to the Bucks, so make the next few days extra fun by getting out and doing something cool around metro Phoenix. Your choices this week include candlelight yoga, cat videos, a toy show, and a dance convention.

It’s tough to ease into Mondays sometimes, especially on the heels of watching the dashed dreams of a hometown sports team. Whatever’s making you feel a little tense these days, painting can have a therapeutic effect. Several spots around town pair painting with wine, but over at Cosecha Healing Arts Space, 1407 East Thomas Road, they pair creative expression with sage. Try one of their Sage & Paint sessions from noon to 2 p.m. on Monday, July 26. All the materials are included in the $35 cost for the class, and you’re welcome to bring your own drinks and snacks along. Purchase your ticket online before attending, because space is limited. Then get ready to unwind and roll with your creative side. Lynn Trimble

Whether or not you associate yoga with spiritual illumination, you’ll find that practicing yoga in a space illuminated by candlelight adds an extra layer of calm to the experience. At Urban Yoga, 1 East Lexington Avenue, you can try flow-style yoga during their Candlelight Flow to Zen class from 7:30 to 8:45 p.m. on Monday, July 26. It’s taught by Amanda Byars, whose training has included more than 200 hours at Urban Yoga and additional training at Yoga Pura. She’ll be guiding people through the class, slowly transitioning from warmup to standing poses, then moving to seated and reclined poses. It’s a chance to focus on breathing and stillness after a long, hectic day. Register online if you want to attend. The class costs $19. Lynn Trimble

Maybe you’re used to seeing art amid the hustle and bustle of First Friday, or opening receptions that draw dozens of people at the same time. Popping into local art galleries during the week, when formal events aren’t happening but the art is still on view, is a great opportunity to really spend time with artwork without having to be elbow to elbow with other art nerds for a change. You can see this year’s “Annual Summer Exhibition” at Bentley Gallery, 215 East Grant Street, between 10 a.m. and 5:30 p.m. on Tuesday, July 27. Expect to see works by more than three dozen artists, including many who create with unexpected materials such as glitter, hook and eye fasteners, lava, Mylar, and accumulated smoke. Gallery admission is free, and the exhibition continues through August 13. Lynn Trimble If you’re having a bit of a "been there, done that" moment when it comes to happy hours, try one of Artlink’s Mixed Media Happy Hours. It’s one of many ways the nonprofit seeks to connect artists, businesses, and community members. The next one happens from 5:30 to 7:30 p.m. on Wednesday, July 28, at Blue Hound Kitchen & Cocktails, which is located at Kimpton Hotel Palomar, 2 East Jefferson Street. The free event, where there will be a no-host bar, is a chance to meet and chat with local artists and fellow art lovers. The evening will also serve as the kickoff for the hotel’s first artist residency with a fashion focus, which means you’ll also be able to see work by local designers. Organizers ask people to RSVP online before attending. Whether or not you decide to show up looking like a fashion plate is up to you. Lynn Trimble

Cats have suffered through some abominable tributes through the years, not least of which is the 2019 movie version of Andrew Lloyd Webber’s Cats musical, which opened on Broadway in 1980. It’s based on a 1939 poetry collection called Old Possum’s Book of Practical Cats, which might make for fun reading if you’re curled up next to your favorite cat on a rainy day, but doesn’t hold nearly the appeal of sitting in a move theater surrounded by fellow cat lovers watching a curated collection of cat videos. Get your tickets pronto if you want to see the CatVideoFest 2021, which FilmBar, 815 North Second Street, is screening at 6 and 7:45 p.m. on both Wednesday and Thursday, July 28 and 29. Basically, the videos are catnip for people, and we’d hate to see any nasty catfights break out if somebody doesn’t get their seats before there’s a sell-out. Tickets are $11, and a portion of the proceeds will go to FilmBar neighbor La Gattara Cat Café & Boutique. Lynn Trimble

You may have seen Jordan-Alexander Thomas robots during your First Friday travels.
Practical Art

It’s entirely possible that robots will rule the world one day, but for now it’s more fun to focus on their playful properties, which are on full display at the i.d.e.a. Museum, 150 West Pepper Place, Mesa. That’s where you’ll find a family-friendly exhibition called “Robo Art,” which features works by artists from more than seven countries, including Argentina, Australia, Germany, and the Philippines. You’ll also find works by artists working around the U.S., including several based in metro Phoenix. Look for robot sculpture by Jordan-Alexander Thomas, and eclectic pieces including paintings, mixed-media, fiber art, video art, and more. Museum hours are 9 a.m. to 4 p.m. on Thursday, July 29. Admission is $9, and you’ll want to leave time for the kids in your life to check out hands-on activities from a robot zoo to robot racing. Lynn Trimble

After more than a year of staying socially distanced from one another, organizers of the annual Phoenix Salsa Bachata Congress will be encouraging folks to get closer on the dance floor. The weekend-long event from Friday, July 30, to Sunday, August 1, at the Hyatt Regency Phoenix, 122 North Second Street, will bring together novice and experienced salseros for three days and nights of activities, workshops, performances, and pool parties. Renowned dancers like Adolfo Indacochea, Tania Cannarsa, Fausto Felix, and Lawrence Garcia will conduct classes in a variety of styles (including salsa, bachata, and Afro-Cuban) during the day while social dance sessions will take place during the evening. Event hours vary. Passes are $75 per day (or $50 for just the nighttime activities) and $185 per person for the entire weekend. Full details and a complete schedule can be found here. Benjamin Leatherman 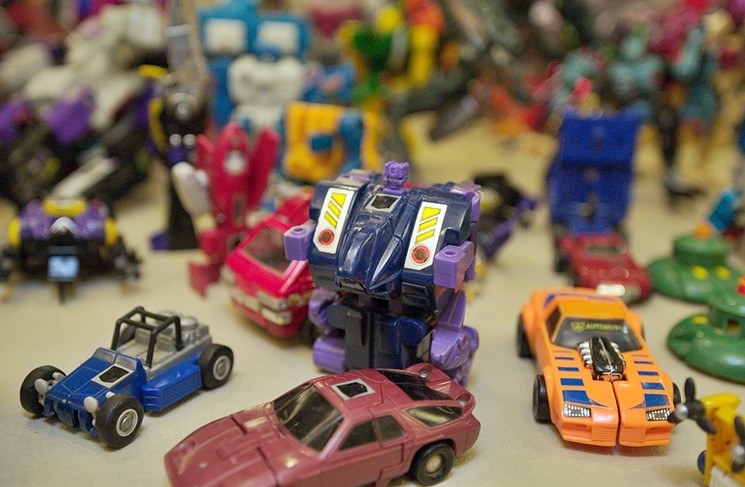 Old-school Transformers and other vintage playthings will be in abundance at the Epic Toy Show.
Benjamin Leatherman

Kids who grew up in the ’70s, ’80s, or ’90s can relive their childhoods one action figure at a time this weekend at the annual Epic Toy Show. The nostalgia will be thick and the crowd will be geeky inside the El Zaribah Shrine Auditorium, 552 North 40th Street, on Saturday, July 31, when dozens of vendors will be selling vintage and modern toys, comic books, collectibles, and other pop culture items. Expect to encounter enough Transformers to populate Cybertron, an army of G.I. Joes, scores of Star Wars figures, and playthings from popular and iconic franchises like Masters of the Universe, WWE, and Teenage Mutant Ninja Turtles. Hours are from 10 a.m. to 4 p.m. General admission is $3 for adults and free for anyone 12 and under. Early-bird admission will be available for the first 50 people starting at 9 a.m. for $8. Benjamin Leatherman

The phrase “nightlife” takes on a whole new meaning after the sun goes down at the Desert Botanical Garden, 1201 North Galvin Parkway. During its weekly Flashlight Nights on Saturdays, patrons can spend an evening on the trail and encounter night-blooming flowers and a variety of other nocturnal flora and fauna. A mix of local vendors will also be set up at the event. This weekend’s edition takes place from 7 to 9 p.m. Saturday, July 31. All-female ensemble Mariachi Pasión will also perform. Admission is $14.95 for adults, $9.95 for kids ages 3 and up, and free for garden members. Visitors are encouraged to bring their own flashlights. Benjamin Leatherman

Get a free baseball card this week.
Jennifer Goldberg

There’s a lot to celebrate in August, assuming you’re down with all those national holiday calendars that find a special day to celebrate even underwear and trail mix. The long list includes national “holidays” for mustard, book lovers, vinyl records, and baseball cards. Naturally, the Topps company that makes baseball cards is doing a special promotion for that last one, where ticket holders at various baseball games around the country will get a free card. Here in Phoenix, the promotion happens on Sunday, August 1, when the Arizona Diamondbacks play the Los Angeles Dodgers at Chase Field, 401 East Jefferson Street, at 1:10 p.m. The home team has been doing a bit better lately, making this the perfect time to cheer them on. Tickets for the game start at $29. Lynn Trimble Recent wildfires and flash floods have given people pause about exactly how Arizonans will need to adapt their living spaces for the future. It’s a question considered by some of the state’s best-known architects, both now and in the past. Frank Lloyd Wright is remembered for his organic architecture, which focused on the relationship of manmade structures to the natural world in both form and function. You can get a feel for how Wright’s architecture expressed his philosophy during the Guided by Wright Audio Tour at Taliesin West, 12621 North Frank Lloyd Wright, Scottsdale. Built by Wright as his winter home, Taliesin West was named a UNESCO World Heritage site in 2019. Learn more during a 60-minute self-guided tour on Sunday, August 1. You’ll need to reserve a timed-entry ticket online (the first entry time is 9 a.m.). Tickets are $40 for adults. Lynn Trimble
KEEP PHOENIX NEW TIMES FREE... Since we started Phoenix New Times, it has been defined as the free, independent voice of Phoenix, and we'd like to keep it that way. With local media under siege, it's more important than ever for us to rally support behind funding our local journalism. You can help by participating in our "I Support" program, allowing us to keep offering readers access to our incisive coverage of local news, food and culture with no paywalls.
Make a one-time donation today for as little as $1.