The Truth About Blumhouse’s Truth or Dare Is Pretty Sorry 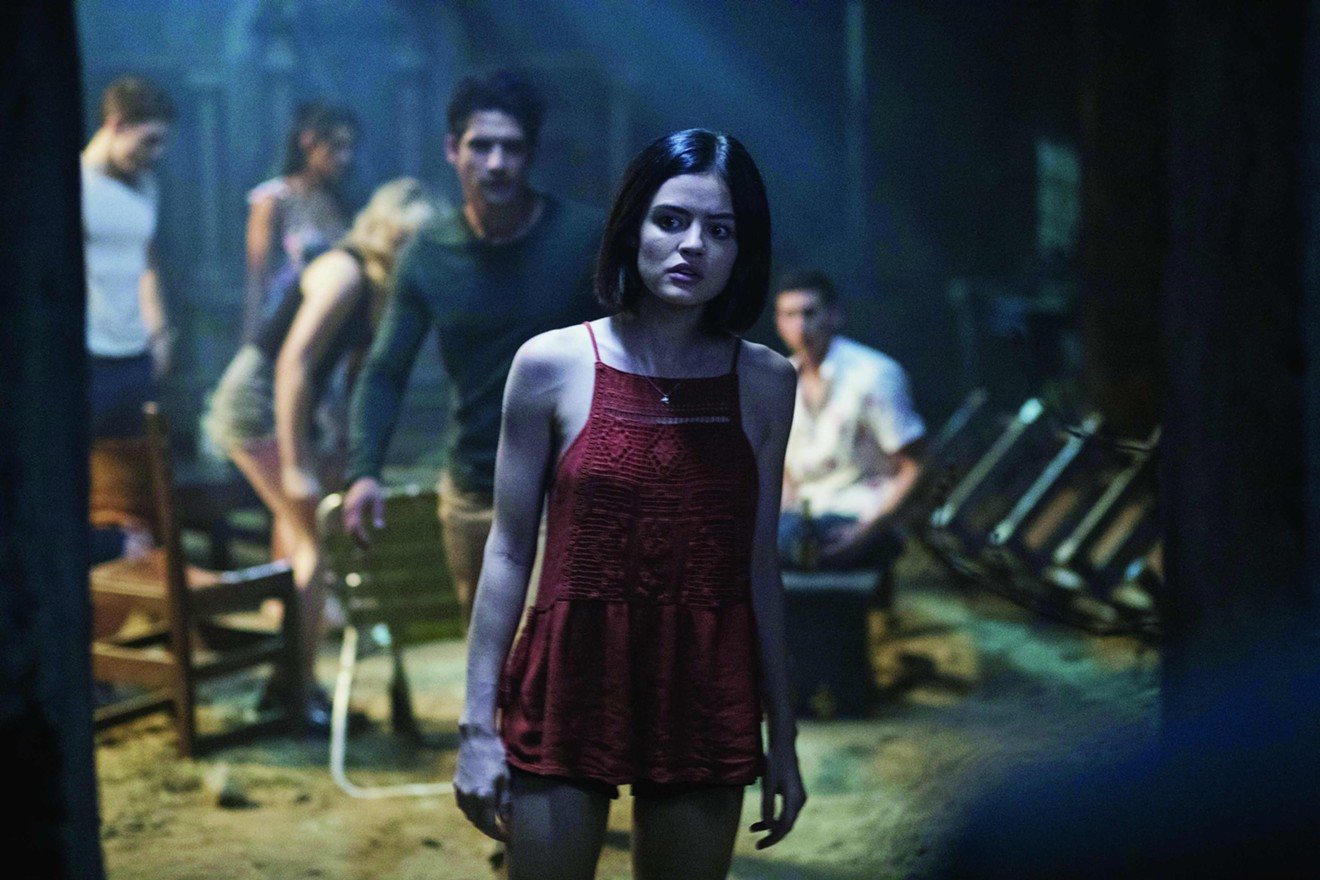 Lucy Hale portrays Olivia, a USC senior who soon finds herself surrounded by schoolmates with glowing red eyes and demonically distorted faces in Blumhouse’s Truth or Dare. Peter Iovino/Courtesy of Universal Studios
The painfully dull horror movie Blumhouse’s Truth or Dare bears the name of its production company, which in turn is named after producer Jason Blum, who’s on a roll. In the past dozen years, he’s energized scary movies with a string of inventive hits, including the Paranormal Activity, Insidious and Purge films, while also earning himself a ticket to the Oscars as coproducer of Get Out. Horror fans trust Blumhouse, so why waste the brand on a flick as lame as Truth or Dare?

Still, better this get the company-in-the-title treatment than Blumhouse’s Get Out.

The fatal game of truth or dare begins for USC senior Olivia (Lucy Hale) and her friends on the last night of spring break in Mexico. Secretly pining for Lucas (Tyler Posey), the boyfriend of her lifelong friend Markie (Violett Beane), Olivia lets herself be charmed by Carter (Landon Liboiron), a stranger who soon has Olivia and her pals trekking by cellphone light to a dilapidated mission in the middle of nowhere.

Carter suggests a party game, secrets get revealed, including Olivia’s, and then, prompted to reveal his own truth, Carter admits that he lured everyone to the mission because “I’m OK with strangers dying if it means I get to live.” Creepy mission curse duly passed on, Carter runs out into the night but not before warning Olivia that the game will follow them home, that they’re all doomed to die if they fail to play and, gosh, he’s really sorry.
The gang laughs off his warning, but back at school, Olivia finds herself surrounded by schoolmates with glowing red eyes and demonically distorted faces who taunt her with the soon to be tiresome query: “Truth or dare?” Olivia survives the harsh moment of truth that follows, but another spring break pal fails to deliver on a dare and promptly dies in what looks to onlookers to be an accidental death.

Fresh ideas are rare in the horror game, so it’s not surprising that Truth or Dare quickly devolves into a riff on the Final Destination films, which had Death wittily and methodically hunting those it failed to nab in plane crashes and other disasters. Olivia and her friends are being picked off, too, but there’s little precision and zero fun in director Jeff Wadlow’s action staging, which tends to be rushed and indistinct. He’s experienced in genre (Kick-Ass 2, Cry Wolf, coproducing TV’s The Strain) but here he seems most at home guiding his young cast through the emotional hoops of the many secrets and true-heart desires the game will reveal. Too often, Truth or Dare feels like a 1990’s era TV teen soap.

In the long home stretch, Wadlow and his four screenwriters build to a fever pitch not of terror, but of explication, as Olivia and Lucas Google themselves silly trying to track the source of the party curse, a process that leads them to a mute Mexican nun who explains everything (and nothing) in notes she scribbles on a pad. Legibly. In English. It’s that kind of movie. Don’t ask for logic or thrills, but do be prepared to return next spring for the sequel. The house of Blum, we suspect, has a plan.

KEEP PHOENIX NEW TIMES FREE... Since we started Phoenix New Times, it has been defined as the free, independent voice of Phoenix, and we'd like to keep it that way. With local media under siege, it's more important than ever for us to rally support behind funding our local journalism. You can help by participating in our "I Support" program, allowing us to keep offering readers access to our incisive coverage of local news, food and culture with no paywalls.
Make a one-time donation today for as little as $1.
Chuck Wilson is a regular film contributor at Voice Media Group. VMG publications include Denver Westword, Miami New Times, Phoenix New Times, Dallas Observer, Houston Press and New Times Broward-Palm Beach.