The Struts are scheduled to perform on Friday, January 28, at Marquee Theatre in Tempe. Chuffmedia
This weekend’s concert offerings in metro Phoenix include some living legends. Names like disco queen Gloria Gaynor, iconic metal band Skid Row and Warrant, and influential singer-songwriter Martin Sexton are all scheduled to perform at local music venues during the three-night span from Friday, January 28, to Sunday, January 30.

A couple of long-awaited shows by British rock band The Struts and sibling punk act The Garden (both of which were delayed by the pandemic) are also scheduled to happen this weekend, as is a gig by L.A. indie-pop band The Marías.

Read on for details about each of these gigs or click over to Phoenix New Times online concert listings for more live music happening this week. Keep in mind, though, COVID-19 and its Omicron variant are still prevalent right now and most local venues are requiring proof of vaccination or a recent negative test result to attend concerts.

Fletcher and Wyatt Shears of The Garden.
Epitaph Records

The Garden at Crescent Ballroom

Twin brothers Fletcher and Wyatt Shears, who make up the two-piece Orange County-based band the Garden, deliver a delicately balanced attack while properly embracing the constraint set by being just bass, drums, and vocals, and they do it with aplomb. The Garden has distinct qualities of punk, New Wave, no wave, (a dash of) glam, and a fair amount of teen angst, even though the Shears boys aren’t teenagers anymore and refer to their sound as "Vada." The twins seem to be extremely comfortable following any musical whim, although their talent and a keen eye for fashion, irony, and sarcasm have shaped their musical output in a way that even the most jaded music reviewer would be reluctant to call their music "whimsical." This weekend, the brothers will play a long-awaited gig in the Valley, which has been postponed multiple times due to the pandemic, when they come to Crescent Ballroom, 440 North 32nd Street, on Friday, January 28. The 8 p.m. show is sold out but tickets are available via resellers. Tom Reardon

The Struts are headed to the Valley on Friday.
Chuffmedia

The Struts at Marquee Theatre

British rock band the Struts' latest tour in support of its third studio album, Strange Days, will land at Tempe’s Marquee Theatre, 730 North Mill Avenue, on Friday, January 28. Formed by four friends in northern England in 2012, the quartet has cited Queen as its biggest musical influence, modeling its sound and style after the rock legends and making a name for itself as certified glam-rock revivalists. The Struts have played alongside some of rock's biggest names, from the Who to the Rolling Stones to Foo Fighters. World’s First Cinema and Charming Liars open the 8 p.m. show. General admission is $28.50 and balcony access is $50. Olivia McAuley

When disco queen Gloria Gaynor recorded “I Will Survive” back in the late-’70s, she helped birth the perfect anthem to both jilted lovers and drag artists alike. Sure, she had other hits, like “Never Can Say Goodbye” and “I Am What I Am.” And yes, she’s in the middle of a career revival that also includes highly entertaining guest appearances on TV. But when you think of Gloria Gaynor, you can’t help but sing “At first I was afraid, I was petrified” to yourself, just a little. Admit it — that song is gonna be stuck in your head for the rest of the day. And you’re gonna love it. Thank Gaynor by singing along to “I Will Survive” during her concert on Friday, January 28, at Celebrity Theatre, 440 North 32nd Street. Start time is 8 p.m. and tickets are $39 to $69. Ciara Lavelle 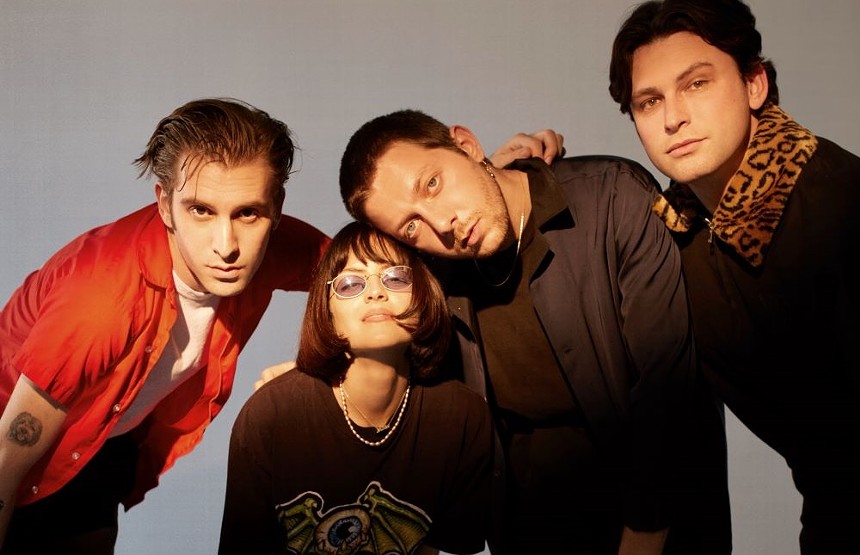 The Marías at The Van Buren

The Marías have only been around as a band since late 2016, though its members already feel like they’ve been on a short, furious and surreal ride. The five-piece – which combines psychedelic, jazz, soul and R&B influences behind the smooth crooning of its namesake frontwoman, who goes only by “María” – drew attention with their first EP, Superclean Vol. I, a chic though earnest soundtrack that, when combined with the band’s physical aesthetic of vintage clothes and music videos filmed on super-8 cameras, lends the impression that the Marías were transported straight out of the 1970s, only with a multicultural twist with bilingual lyrics and drawing upon a distinctive mixture of styles that feels more suited to our time. They’re touring behind their 2021 debut album Cinema and are scheduled to perform on Friday, January 28, at The Van Buren, 401 West Van Buren Street. Venezuelan-born indie singer-songwriter Maye opens the evening at 7 p.m. Tickets for the show are officially sold out but can be found on the secondary market. Chris Walker

Martin Sexton is a singer's singer. Whereas most male vocalists are tethered by timbre to a particular style, Sexton bends his voice with the fluid flexibility of a skilled instrumentalist, adapting to fit his frequent stylistic tangents with aplomb. An instrumental analogy is apt, as Sexton is equally likely to employ his vocal cords for nonverbal effect. For a lesser vocalist, it would be a dangerous enterprise, at best, to make such frequent use of potentially contrived-sounding techniques like scat singing, whistling, and (most alarmingly) vocal simulation of actual instruments. Sexton does it so casually and effectively, though, that it never feels out of place or affected. He's no slouch with an actual instrument, either, frequently relying on an acoustic guitar as a backup to his vocal shenanigans. The guitar becomes an extension of his voice (or vice versa), and the two share the duty — and the spotlight — with equal verve and charm. Sexton’s latest visit to the Valley happens on Friday, January 28, when he’ll perform at the Musical Instrument Museum, 4725 East Mayo Boulevard, at 7:30 p.m. Admission is $44.50 to $59.50. Nick Hall

The up and down career of Skid Row is a microcosm of just about any successful ’80s metal act. Hitting a peak with the 1991 sophomore effort Slave to the Grind, the band was quickly derailed by the grunge movement and ended up losing lead singer Sebastian Bach. Amazingly, the band reemerged in 1999 and have featured a couple of different lead vocalists since then, including the late Johnny Solinger, Tony Harnell, and current frontman ZP Theart (formerly of DragonForce). Skid Row are still rocking hard after all these years and are currently touring with fellow metal legends Warrant and Winger on the Live to Rock tour and will roll into Talking Stick Resort, 9800 East Talking Stick Way in Scottsdale, on Saturday, January 29. Tickets for the 7 p.m. concert, which takes place next to the resort’s outdoor pool, are $25 to $60. Darryl Smyers

Many may call them a nostalgia act, but when your history is as storied and amazing as that of Melvin Seals, let them talk. Seals and company have been continuously touring ever since Jerry Garcia's death as an homage to the man who began it all, and Seals commands a lot of stage presence in his own right, with his Hammond B3 organ blaring loud and proud, demanding that everyone listen. Seals keeps the flame alive with the Jerry Garcia Band, playing reverent covers as well as tossing in new material. Such will be the case when Seals and JGB perform at Tempe’s Marquee Theatre, 730 North Mill Avenue, on Saturday, January 29. Doors are at 6:30 p.m. and tickets start at $30. Leslie Simon
KEEP PHOENIX NEW TIMES FREE... Since we started Phoenix New Times, it has been defined as the free, independent voice of Phoenix, and we'd like to keep it that way. With local media under siege, it's more important than ever for us to rally support behind funding our local journalism. You can help by participating in our "I Support" program, allowing us to keep offering readers access to our incisive coverage of local news, food and culture with no paywalls.
Make a one-time donation today for as little as $1.