The Sweet Story Behind the New-Ish Candy & Records But the real story is a tad more complicated. Golembiewski, who moved to Phoenix circa 1994 to study at Universal Technical Institute, admits he was "drunk and belligerent for a long time," hopping between jobs (auto mechanic, record store clerk, contractor, etc.). Until, in 2012, he met his future wife, Monika Golembiewski.

"She never told me to do anything, "Josh Golembiewski said. "I just wanted to stop [drinking]. Once I stopped, it was nice."

Monika Golembiewski had a slightly different life path, and spent years working in radio and television. But they had a shared passion for music: Josh has played in local bands, including the long-running Dephinger; Monika was a longtime promoter in Prescott.

So, while the two had settled into married life and raising a family, Monika Golembiewski didn't enjoy seeing her husband work himself to near-death.

Then, COVID-19 happened, and the couple, but especially Josh, were faced with big career decisions.

"I was doing low-temp air conditioning at Pennington Gardens in Chandler," Josh Golembiewski said. "Like, 13 people died over a weekend. I was there the next day, in a room with a lady with COVID. So on the way home, [Monika] calls me and says, 'I got you a new job at the record store.'" 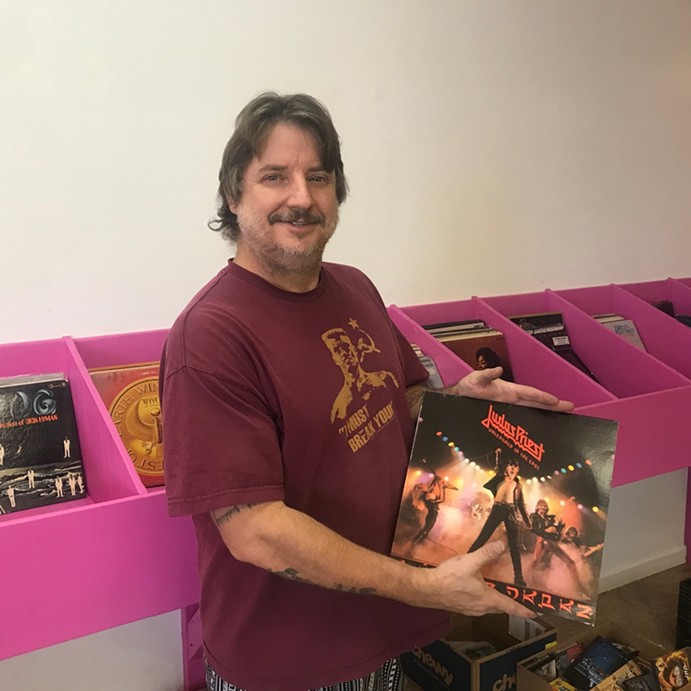 Josh Golembiewski displays some of the shop's many choice vinyl records.
Candy & Records
Only that job — where Josh was "paid under the table" — often didn't mean enough hours, and the pair at last opted to leave the rat race to start their dream gig. They just had to raise more money first.

"We both got a job selling beer at the Arizona State Fair," Josh Golembiewski said. "We saved all of our money; 12 hours a day, five days a week." Monika Golembiewski noted that they even made a game of who could raise the most. (Josh won by a mere $5 one day, but Monika said it's only because she made mixed drinks over his pouring beers.)

It's here in their story that we pause to discuss their dynamic. Monika says she's the "tightly wound one," while Josh describes himself as more laissez-faire: "I tried to be a f***up for 25 years. As hard as I could. And here I am today." 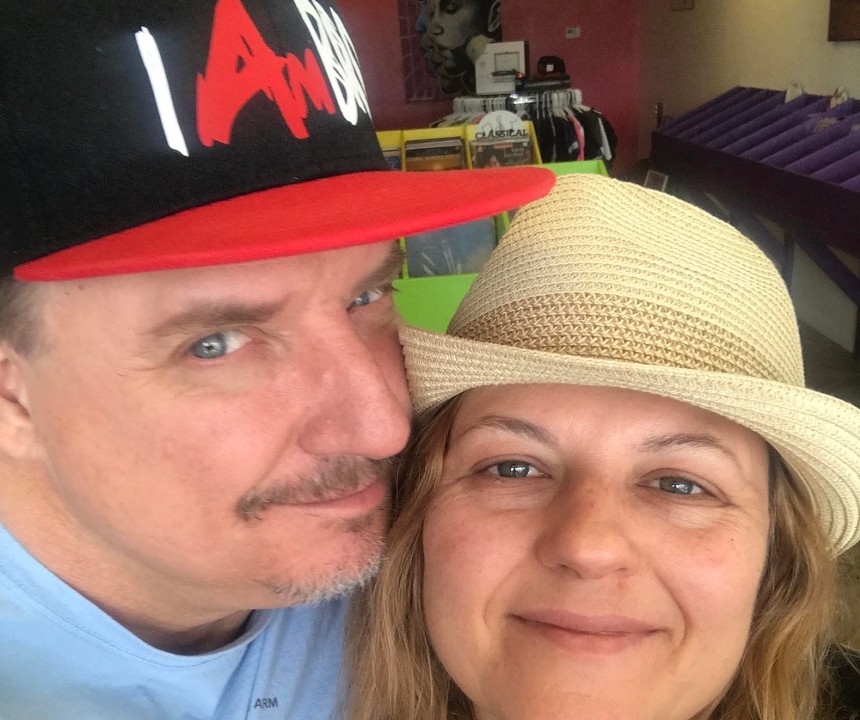 From left, Josh and Monika Golembiewski pose for a shot while setting up shop in late 2021.
Candy & Records

If it sounds a little Odd Couple-esque, that's because they are.

"I think sometimes it drives me nuts," Monika Golembiewski said of her husband's breezier approach to life. "But he's the most patient and tolerant person I've ever met. So that definitely works."

Their relationship is also best represented in how they landed on the store's name.

"He decided to call it Candy & Records based on some phrase he kept saying back in the day," Monika Golembiewski said. "Like, 'I'm going to spend my allowance on candy and records.' Nobody gets it. Nobody."

For his part, Josh Golembiewski responded with a smile and by holding Monika's hand. It’s ultimately all proof that their relationship has made them effective business partners.

"We definitely have our own things," Monika Golembiewski said. "He buys the records, he researches them, he cleans them, and he fixes them. I place the orders, I do the transaction privilege tax things, and file the quarterly reports. And I do the social media." Josh Golembiewski prepares the shop in November 2021.
Candy & Records
They spent a couple of months in late 2021 getting the shop near Central Avenue and Hatcher Road ready, with Josh Golembiewski building the walls and shelving alongside friends. They had a full open in January 2022, and it's been mostly smooth sailing ever since. There have been some issues — like dealing with the national coin shortage, or an incident earlier this summer in which they received melted candy. (Now they offer sour treats, like Toxic Waste.)

But, as Monika Golembiewski added, their back and forth ultimately keeps them focused.

"I need him to tell me to sit down every once in a while and just take a breath," she said. "And sometimes he needs me to crack the whip."

Given the significance of their relationship, it's not entirely about selling the most records. For one, Monika Golembiewski said that they're both "Gen X, so we grew up with record stores and want to share that experience." They mentioned a story of five tuxedo-wearing youths coming from a nearby quinceañera to watch an all-woman punk band.

"There was steam coming out of their ears," Josh Golembiewski added.

As such, hooking the youth is a big part of the shop's larger aims.

"If you can't tell from the bright colors here, we wanted to be accessible to young people, because [records] are for men over 50," Josh Golembiewski said. "I watched kids come into [stores] and feel incredibly intimidated, and not buy [anything] and certainly not get the experience they should have."

Added Monika Golembiewski, "I remember that feeling as a kid, discovering punk. And I thought, ‘These are my people.’ Like, this is what I've been looking for. I fit in."

It's not entirely an age thing; it’s about quality, genre-spanning records for everyone.

"I've got the cleanest records — that's my hook," Josh Golembiewski said. "I'd rather have less records that are good than, like, 500 records. We got our $1 records down to four or five crates. I'm not trying to have a bunch of dirty, old records." 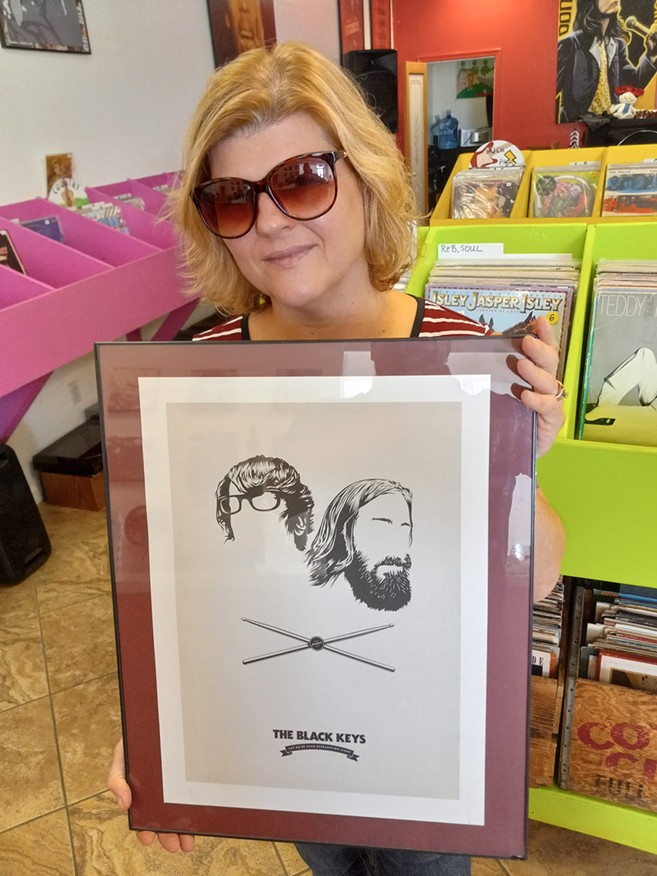 Monika Golembiewski shows off some band merch at the store.
Candy & Records
And while the pair remain diehard punks, they sell almost everything.


"We got twenty one pilots from Stinkweeds for our wedding gift," Monika Golembiewski said. "I had to forfeit the rest of the [gift] certificate to get it. And then he made me sick of it. We're finally not so cool and can admit we listen to other music." That includes another recent family favorite, Harry's House from Harry Styles.

That sense of accessibility is important, and they make decisions that feel appropriate for the shop.

"I've heard about some [record shop] manager that arbitrarily jacks up the prices on a few records [because] he thinks he can get it," Josh Golembiewski said. "This [neighborhood] is Sunnyslope. I could put a $700 record on the wall, and people would say, 'That place has the $700 record; there's nothing there that I can afford.' You're going to scare people away."

That kind of decision-making also exemplifies the couple's shared commitment to Sunnyslope, where Josh has spent much of his adult life.

"I would drive to Phoenix from Prescott all the time," Monika Golembiewski said. "I'd tell my friends back in Prescott, 'There's this little section of Phoenix that it just feels like a small town. There's a Walgreens that still has the old sign.'"

And everything in their experience has only further perpetuated those connections.

"The neighbors have all been really great," Monika Golembiewski said. "They love it when we have a show because they get more business. Everybody's been great about wanting us here. Sunnyslope has a charm here; I don't want to leave." 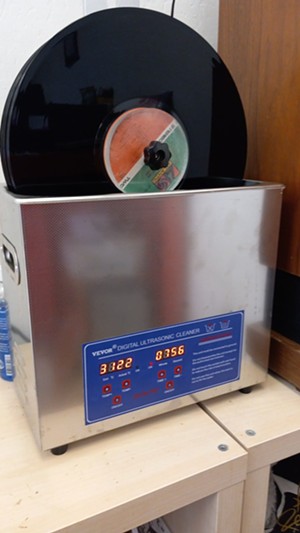 The store uses this ultrasonic device to clean records.
Candy & Records
In turn, they're spreading that love around. For one, the shop constantly hosts shows, from punk to reggae and even an acoustic singer-songwriter who lives nearby. They also sell items for local musicians and artists, and they never take a cut beyond the sales tax they pay.


"It’s hard enough for local, independent artists to sell their record/CD/tape/merch for $7 to $20, and they’re really not making much money, if any, at that price," Monika Golembiewski said. "So it’s hard for us to ask a local artist for money on top of that, just to get their music out there to be heard."

They're even trying to help out other shops. As they see it, a shared interest in vinyl is good for everyone.

"If we don't have that record, then The Record Room might," Monika Golembiewski said. "We always want to drive traffic [around]."

While the shop's still relatively young, the Golembiewskis want to keep things moving forward. That means hosting more shows, adding to their inventory, and enhancing the space to accommodate accordingly. For Monika Golembiewski, it's about "giving people an experience. And we like to educate them, too." Her husband and partner readily agrees, but he's got a more philosophical bent about why Candy & Records is already a big success.

"If I'm here every day, cleaning records, then the universe or God or whatever will pay me dividends," Josh Golembiewski said. "But this whole other side of it — having responsibility and growing up and everything I avoided my whole life? Who knew that was fun?"

Candy & Records is located at 9402 North Central Avenue, Suite 8A. Check out its Facebook page for more information.
KEEP PHOENIX NEW TIMES FREE... Since we started Phoenix New Times, it has been defined as the free, independent voice of Phoenix, and we'd like to keep it that way. With local media under siege, it's more important than ever for us to rally support behind funding our local journalism. You can help by participating in our "I Support" program, allowing us to keep offering readers access to our incisive coverage of local news, food and culture with no paywalls.
Make a one-time donation today for as little as $1.
Chris Coplan has been a professional writer since the 2010s, having started his professional career at Consequence of Sound. Since then, he's also been published with TIME, Complex, and other outlets. He lives in Central Phoenix with his fiancee, a dumb but lovable dog, and two bossy cats.
Contact: Chris Coplan
Follow:
Twitter: @CCoplan