Blink-182 and Lil Wayne are scheduled to perform on Monday, August 5, at Ak-Chin Pavilion. Randall Slavin
Eager to see a show this week (and have the time and disposable income to do so)? The good news is you’ve got a wealth of options to choose from – 10 of ‘em, to be precise. As we always do every Monday, we’ve picked out a mix of great shows happening in the Valley over the next few nights that are worthy of your attendance.

That includes Blink-182 and Lil Wayne’s summertime tour, Carly Rae Jepsen's performance at The Van Buren, and all-female surf band The Surfrajettes riding the wave into the Yucca Tap Room in Tempe.

Other highlights of this week’s concert calendar include Frank Iero of My Chemical Romance bringing his latest solo project to town, electro-industrial act God Module making some noise at The Rebel Lounge, the latest "Cover the Crescent" session paying tribute to the music of Leonard Cohen, and a performance by the incomparable Lydia Lunch at Valley Bar.

Details about each of these gigs found below. And for even more live music happening around the Valley this week, hit up Phoenix New Times' online concert calendar. 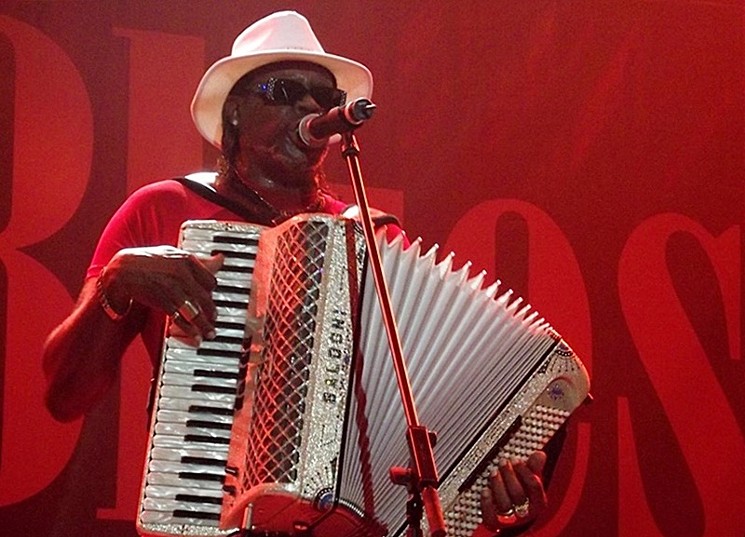 As Hank Williams III, Lisa Marie Presley, Jakob Dylan, and Julian Lennon can attest, choosing the same career path as your musically famous father brings both rewards and dangers. Doors will open and opportunities arrive simply by virtue of a familiar last name – but so does the constant comparison and stringent fan expectation. C.J. Chenier – son of the late, undisputed king of zydeco, Clifton Chenier – took up his father's music, accordion, and even his band after Clifton's 1987 passing. But by smartly infusing more contemporary aspects of rock, funk, and blues into the traditional zydeco, C.J. has forged his own path, which still celebrates his father's legacy. He's also got one of the genre's most versatile, if not technically proficient, voices. Hear it for yourself starting at 8 p.m. on Monday night at the Rhythm Room. Tickets are $20 to $25. Bob Ruggiero

Whether it's surrealistic horror movies and literature, esoteric knowledge, or atmospheric music and deathrock, God Module's output reflects a certain fascination with the dark side of the psyche — a mosaic of interests, perhaps even obsessions, held by founding member Jasyn Bangert. The act are rooted in edgier EBM and more dance-oriented industrial music, while Bangert's vocals wouldn't be out of place in a black metal band. With some visual and sonic nods to the likes of Christian Death and Clan of Xymox, there is something simultaneously unsettling and cartoonish to the group's live show, a mix you don't often see. Experience it for yourself on Monday night when God Module comes to The Rebel Lounge. The show is at 8:30 p.m. and Amnestic opens. Tickets are $10 in advance, $13 at the door. Tom Murphy

As you may have heard, Blink-182 and Lil Wayne are touring together this summer. Yes, really. Blink-182, the biggest pop-punk band on the planet (who are celebrating the 20th anniversary of their landmark album, Enema of the State), and Lil Wayne, the rock star rapper responsible for "Uproar" and more, are coming to the Valley on Monday, with support from Neck Deep. And despite some discord on Weezy's part (including walking offstage after performing for only 20 minutes during a stop in Virginia early in the tour), everything’s copacetic, more or less. They even released a mashup of "What's My Age Again?" and "A Milli" on YouTube as a teaser for the tour, which comes to Ak-Chin Pavilion at 7 p.m. on Monday night. Neck Deep opens. Tickets are $37.50 to $137.50. Douglas Markowitz

Frank Iero and the Future

Frank Iero is a man of many names. Band names, that is. The former My Chemical Romance guitarist has always dabbled in side projects, even in the band's heyday. But since the emo icons went their separate ways in 2013, Iero has been going at it alone.

Iero says this process keeps him on his toes and allows his music to feel fresh. “I get to reinvent myself every time,” he says. “To stay creative on the road as well as in the studio is all I’ve ever wanted, and I’ve found a way to be able to do it.” He’s currently touring in support of his latest album, Barriers, and will perform at Crescent Ballroom on Tuesday along with the Future . The show is at 8 p.m. and Geoffrey Rickley shares the bill. Tickets are $22.50. Chelsey Norris

Closet Goth may claim to hail from “Party City, Phoenix,” but their actual home might be somewhere in SoCal circa 1988. That’s not just because theirs is a very specific brand of punk, bouncy hardcore made for weirdos to listen to on cassette while skating around and smoking dope. There’s also the fact that the band champion that early hardcore mentality of releasing as much stuff as possible.

This year alone saw Closet Goth release the single “Why Is No One Laughing At My Jokes?,” a full-length titled Friendship Village, and a four-track EP, Paradise Video. That latter release encapsulates what makes Closet Goth so great: a free-flowing, kinetic brand that pays homage to the likes of Black Flag and Suicidal Tendencies while setting the playbook ablaze in favor of newfound sonic devastation. Their Tuesday night show at The Rhythm Room starts at 8 p.m. with support from The Edisons and El Paso, Texas's Emily Davis and the Murder Police. Admission is $7. Chris Coplan