TastyKake reps their Philly 'hood in baked goods. Utz is the salty-snack beast of the Northeast. Where do you turn if you want to throw your A'z up and want local munchies to rise up? Enter Poore Brothers. Since '86, the Goodyear-based company has kettle-cooked their potato chips full of crunchiness and amazing flavors. Their dill pickle and guacamole varieties are gone, but they still rock with salt and cracked pepper, sweet Maui onion, and triple cheese jalapeño. It's easy to proclaim, "We the best!" on behalf of the home team when it's actually true.

Carl's designer vegetables are pure art. Heirloom seed stock, some near extinction, groomed and grown to produce some of the most tender and tasty tomatoes, greens, and herbs with an attention to detail that rivals Italian designer goods. With varietal names like Black Russian, Cherokee Purple, and Snowbell, these are no ordinary tomatoes, which show in a palette of colors that rival the spring collections in Milan. Even better, Carl's putting his design skills to use by cultivating a couple of signature tomatoes, which will include a Cherokee Orange. Ever seen purple haricots vert? They're our new favorite, thanks to Carl. His attention to gardening detail and creation of high-end and fragile foodstuffs has earned him the nickname "the Gucci gardener."

But unlike designer showrooms featuring evening gowns, these tasty bits won't cost an arm and a leg. Carl's got good taste, that's for sure, and so does his produce. (You can reach him directly at [email protected] or 623-846-4624.)

Be warned. These delicious delectables are delicate. And gone, baby, gone — faster than last season's Prada shoes. The market opens at 8 on Saturday mornings, and the best of the batch will be long gone by 9. 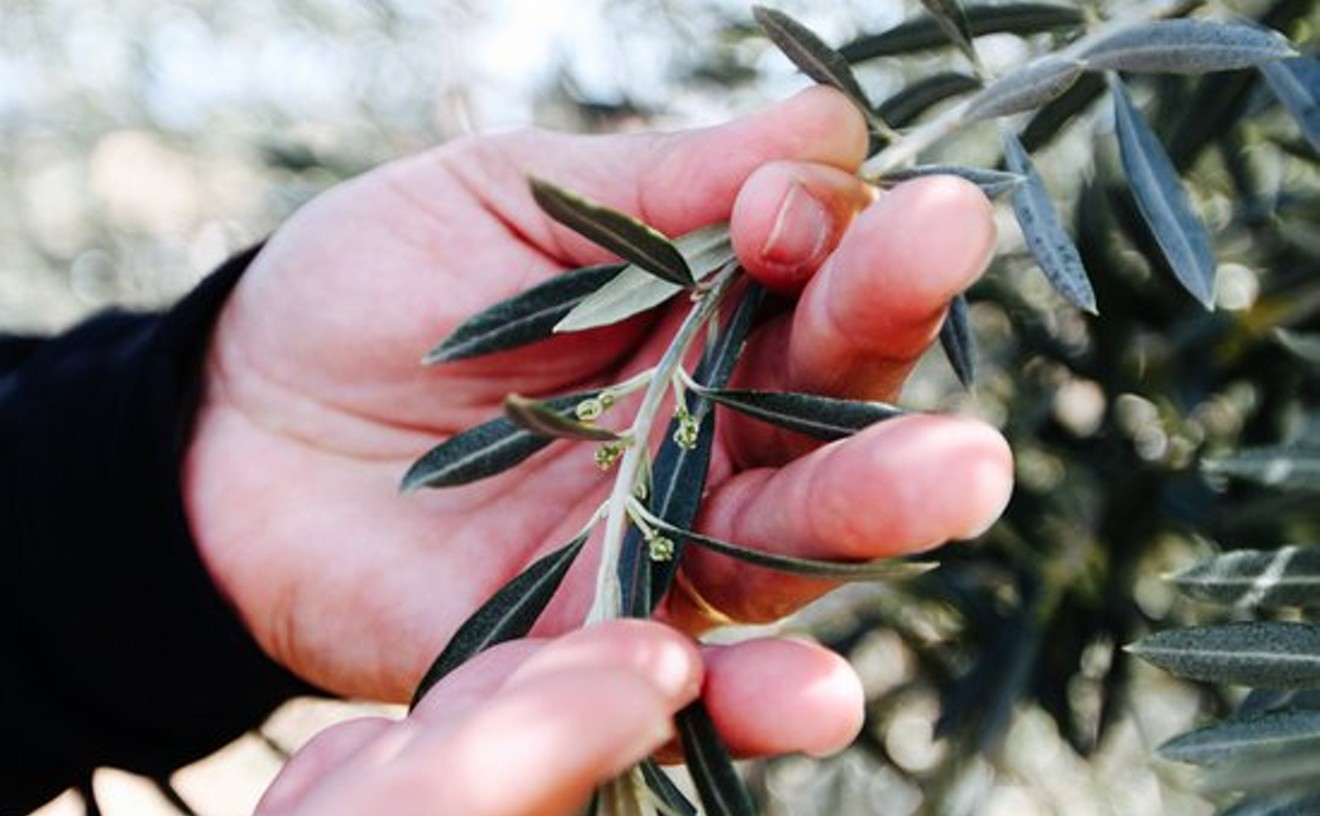 Perry Rea and his family planted a bunch of olive trees about a decade ago in what still passes for the sticks. They had a dream — make that a goal — of starting Arizona's first working olive farm and mill. And talk about hitting the jackpot. These days, some people taste the olive oil as if they're sipping a fine wine. They swear by this place in the far East Valley. At the company store, patrons can sample (and buy) several flavors of extra-virgin olive oil, dipping sauces, and some fine balsamic vinegar, all of them locally grown and produced. What an unexpected and delicious gift to send from the desert, one that won't break the bank, either.

Though Snowflake, the northern Arizona town nestled in the White Mountains, is outside our coverage area, we make an exception for this fabulous cheese that is available for purchase at boutique food stores around the Valley (Whole Foods is one) and at fine restaurants such as Quiessence. If you consider goat cheese to be an overpowering, overly pungent experience, think again. Black Mesa's cheeses are made exclusively from the milk of their own herd of Nubian goats, an African breed known for their adaptability to the hot summer temperatures.

The family-owned and operated company's Web site declares that Black Mesa never works on more than 14 gallons of milk at a time. That allows it to pay the closest detail to every step of the cheese-making process. The various cheeses — we especially like the goat's milk feta — are available online and at very reasonable prices. In a previous life, one of the owners was a pastry chef, and Black Mesa's commercial candy kitchen includes Goat's Milk Fudge and Butter Almond Toffees. Let's hear it for the goat!

Quel fromage! We had to do a double-take the first time we stumbled into Whole Foods' cheese department, where the variety of fine artisanal cheeses — cow's milk, goat's milk, sheep's milk, you name it — just boggles the mind. From soft, tiny rounds of fresh chèvre and wedges of aged Gouda to slabs of creamy, pungent Époisses de Bourgogne, there's almost anything we could conjure up in our wildest cheese fantasies (and it doesn't hurt that the lavish displays are so appealing that they verge on food porn). Sniff around (literally and figuratively) and you'll be surprised by the novelties you'll find. There are usually samples to nibble on as you peruse the offerings, and if you'd like a taste of something before you splurge on a pricey chunk of it, the genial staff will be eager to let you try it. Trust us, this is one place where you can feel proud to be cheesy. 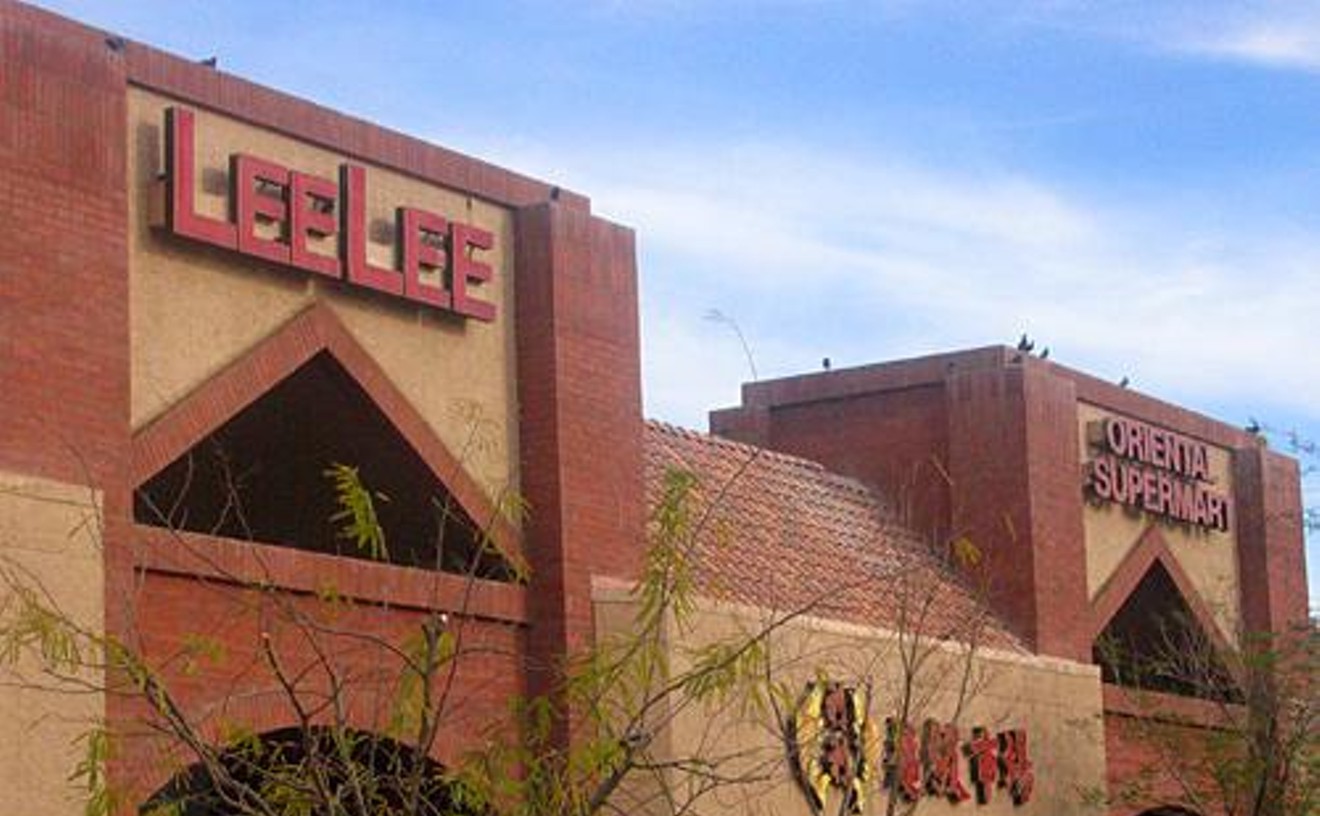 You know an ethnic market's good when it becomes a destination for an entire community. In the case of Lee Lee, we're talking several communities, including Vietnamese, Chinese, Korean, and Japanese. Folks from all over drive here. It's no wonder. Where else can you stock up on so many kinds of exotic vegetables and hard-to-find greens, or peruse aisles full of noodles and seaweed? Lee Lee truly caters to homesick (and hungry) Asian immigrants and gourmet home cooks alike, offering just about anything you'll need to make an authentic feast. The seafood here is especially alluring because you can spot the catch of the day while it's still swimming around in the fish tank. And for immediate gratification, there's an aisle of ready-to-eat hot foods, from meats to dumplings. We think Lee Lee is the best, and we know we're not alone: Demand has been so high that Lee Lee just opened a West Valley location in the spring.

When we heard that one of our favorite bars, the legendary Chez Nous, was being knocked down to make room for a British grocery store, we were horrified. We loved Chez Nous! And who needs another market, particularly one from the culinarily challenged Brits? Well, we stand corrected. This tidily stripped-down chain now has five Phoenix locations and 14 in the 'burbs, and after hearing friends from Avondale to Scottsdale sings its praises, we went to see for ourselves and were instantly won over. Lazy cooks like us thrill to the market's "kits," which use fresh ingredients to replicate that whole Lean Cuisine meal-in-a-box experience.

And our aspiring chef friends adore the fresh fruits and veggies — bought from local growers whenever possible. So when fresh & easy finally opened its location at the site of the old Chez Nous, we came bearing ATM cards, rather than picket signs. 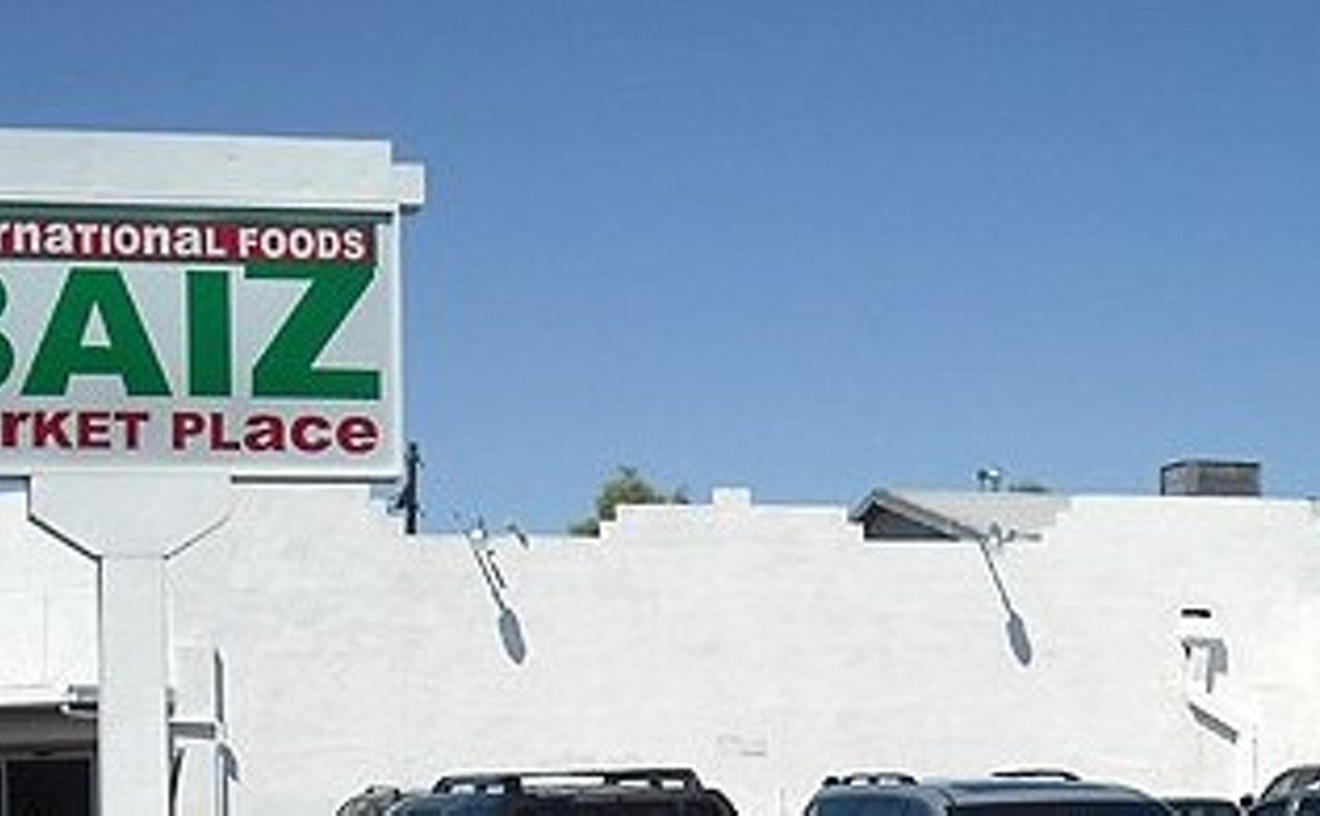 We'd always thought that enough aimless driving would lead us to the best shopping finds in Phoenix, but it took a good friend to clue us in to the city's finest destination for Middle Eastern food. Baiz Market is one spot we never would've stumbled upon, because it's tucked in a quiet neighborhood north of Van Buren Street. Now that we've found it, we don't know how we ever got by without this oasis of imported ingredients, from nuts and spices to more kinds of cooking oil than we knew existed. There's produce, a deli counter with olives, cheeses, and halal meats, as well as a mouthwatering display of housemade cookies and delicate Middle Eastern pastries. Besides comestibles, there's an aisle of splurge-worthy housewares, from dainty tea sets to utensils to elaborate hookahs. At the front, next to the cash registers, tiny Al-Hana Restaurant serves up just-baked pita from a wood-fired oven, grilled meats, hummus, and more. Whether we're in the mood to stock the whole pantry or just grab a quick bite, Baiz Market always hits the spot.