Starset is scheduled to perform on Wednesday, March 7, at Marquee Theatre in Tempe. Courtesy of Lucky Man Concerts
If you like your metal served up by a wrestling superstar or with a side of space shtick, it’s gonna be a big week. Same goes for fans of k.d. lang, Of Mice & Men, COIN, and Jake Shimabukuro, all of whom have gigs in the Valley this week.

Other noteworthy shows happening at Phoenix music venues over the next few days include a two-night stint by Brockhampton at The Van Buren, a celebration of the music of the late David Bowie, and local surf/lounge act Moonlight Magic.

Details about each of these shows can be found below in our rundown of the best concerts in Phoenix this week. And for even more live music around town, check out the Phoenix New Times' online concert calendar.

Famed drummer Art Blakey had a knack for finding outstanding young players to play in his Jazz Messengers, and one of many fine pianists to come out of that group was Benny Green. The hard-swinging hard bop pianist has also been a sideman for a number of jazz luminaries, including such legendary artists as Bobby Watson, Betty Carter, and Freddie Hubbard. Oscar Peterson even picked him to be the first recipient of the city of Toronto's Glen Gould International Protégé Prize in Music while no less than the New York Times called him an “astute pupil of the hard bop tradition.”

Green has also released a total of 17 albums under his name since the late '80s, including his most recent albums, 2013’s Magic Beans and last year’s Happiness! Live at Kuumbwa. This week, he’ll tear up the ivories inside the Musical Instrument Museum’s Music Theatre where he’ll join renowned jazz singer Veronica Swift, who’s gotten plenty of from critics herself. Jon Solomon This ensemble of seasoned local musicians is a great band to get woozy to. Or maybe, they’re the ones causing those woozy sways with breezy original tunes. Their sounds keep you moving; their infectious blend of exotica, lounge, and sounds are breezy and hypnotic. The band consists of Ruth Wilson on bass, Eddy Detroit on drums and percussion, Andrew Jemsek on organ and accordion, and Jamie Paul Lamb on guitar. Each has a lengthy resume of musical projects.

With a collective wardrobe any respectable lounge lizard would envy, this band doesn’t stick to playing in traditional venues. They’ll cram into the packed downtown tiki bar Bikini Lounge to play right in the middle of the party crowd. Another awesome way to catch them is atop the Clarendon Hotel, performing at the venue’s rooftop bar with the wind carrying their sounds into the infinite view. Or you could swing by their gig at Valley Bar on Monday night, which starts at 7 p.m. and is completely free. Amy Young

Jake Shimabukuro's fingers run up and down a ukulele's tiny, two-octave fretboard as nimbly as any rock guitarist's. But he stays true to the song. Indeed, much of Shimabukuro's success over the years has been tied to his spot-on renditions of famous rock and pop tunes. (He shot to fame more than a decade ago thanks to his cover of the Beatles' "While My Guitar Gently Weeps," one of the first viral videos on YouTube.) And some songs have been extremely tricky to translate to ukulele. He struggled, for example, to arrange Queen's "Bohemian Rhapsody."

Shimabukuro's last album, Nashville Sessions, was his first collection of all-original songs. His forthcoming album, The Greatest Day, is about half originals and half covers, and the track list includes Jimi Hendrix's "If 6 Was 9," the Beatles' “Eleanor Rigby,” the Zombies’ “Time of the Season," and an island-reggae version of Ed Sheeran's "Shape of You."

The Hawaii-based Shimabukuro is in the midst of an extensive national tour to promote The Greatest Day. At this point in his career, he's very familiar with the touring grind. On average, he plays between 110 and 130 shows a year, which inevitably results in some wear-and-tear on his hands.

"When we have a lot of back-to-back shows, sometimes my fingertips get a little raw," he says. "You really want to dig in and give it your all, so there are times when the fingers get tender, but when you start playing, the adrenaline kicks in and you feel no pain." Howard Hardee Like some people are cellphone crazy, Phil Manansala is guitar-crazy. He picked up his first ax at 10 years old and has barely put it down these past 17 years, though he’s never once taken a formal lesson.

His current project, metalcore act Of Mice & Men, formed when he a guitarist was touring with the band A Static Lullaby. There was another metal band on the bill, Attack Attack! And from those two bands came the outline for Of Mice & Men.

And if you’re wondering why a metalcore crew named itself after a nearly century-old John Steinbeck novella, they supposedly chose that book title for its moniker because the members believe “everyone should be living off your own American dream,” Manansala says. David Rolland 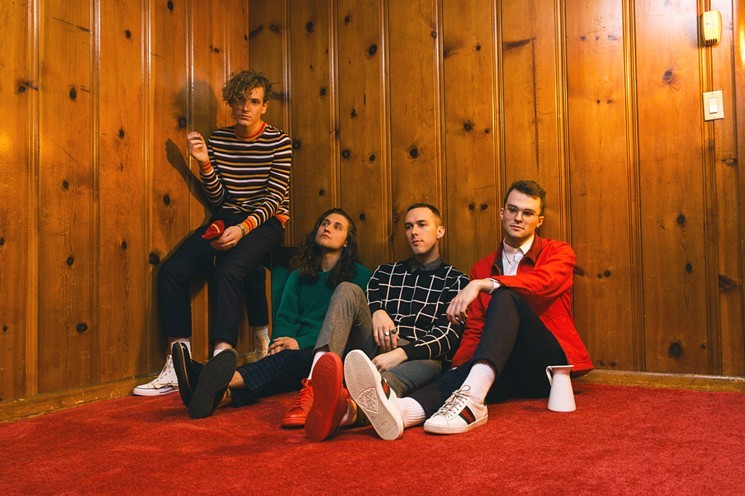 Despite the obvious talent on display with these releases, it wasn't until 2015 that the eyes of the national music scene fell upon the still-young quartet with their single "Run," a blistering three-and-a-half-minute pop-rock gem that induces involuntary head-bopping and energetic nostalgia. Swirling synth lines and memorable sing-along choruses supported by tight musicianship became COIN's M.O. The summer 2015 release of the band's self-titled debut full-length capitalized on this success, drawing positive reviews from national music outlets like Billboard.

Since then, COIN's success has only grown; the band reached another milestone last spring when they released their second full-length album, How Will You Know if You Never Try. On this release, the group's sound begins to take a new direction, with a wider inclusion of synthesizer and a slightly more new-wave song structure, as well as more powerful, honest lyrical ideas. The 40-minute opus boasts a mildly retro feel, while still maintaining a fresh, unique, and exciting sound. John Nicholl