If you happen to miss the Free Street Band's sidewalk performances outside Carly's Bistro at Second Street and Roosevelt during First Friday in downtown Phoenix, don't worry. You can also catch the marching musical group at the corner of Garfield and Third Street, or McKinley and Fourth, or even... Well, you get the point. Like local rockers the MadCaPs, the pipe-and-drum trio stays on the move during the monthly art walk (except they're on foot instead of the back of a pickup truck), bringing their wailing brand of music to the masses. Led by abstract painter and bass drummer Joe Axton, this kilt-clad quintet of aging hippies also includes a bagpiper, snare drummer, bodrhán player, and bass player who perform such standards as "Scotland the Brave" or anti-war favorites like John Lennon's "Give Peace a Chance" all over the Evans-Churchill neighborhood. Unlike the MadCaPs, who always seemed to be getting tailed by the cops, we're betting the fuzz won't bother with these guys. Just try to catch them — The Free Street Band doesn't even have a MySpace page. Leave word at collins[email protected] 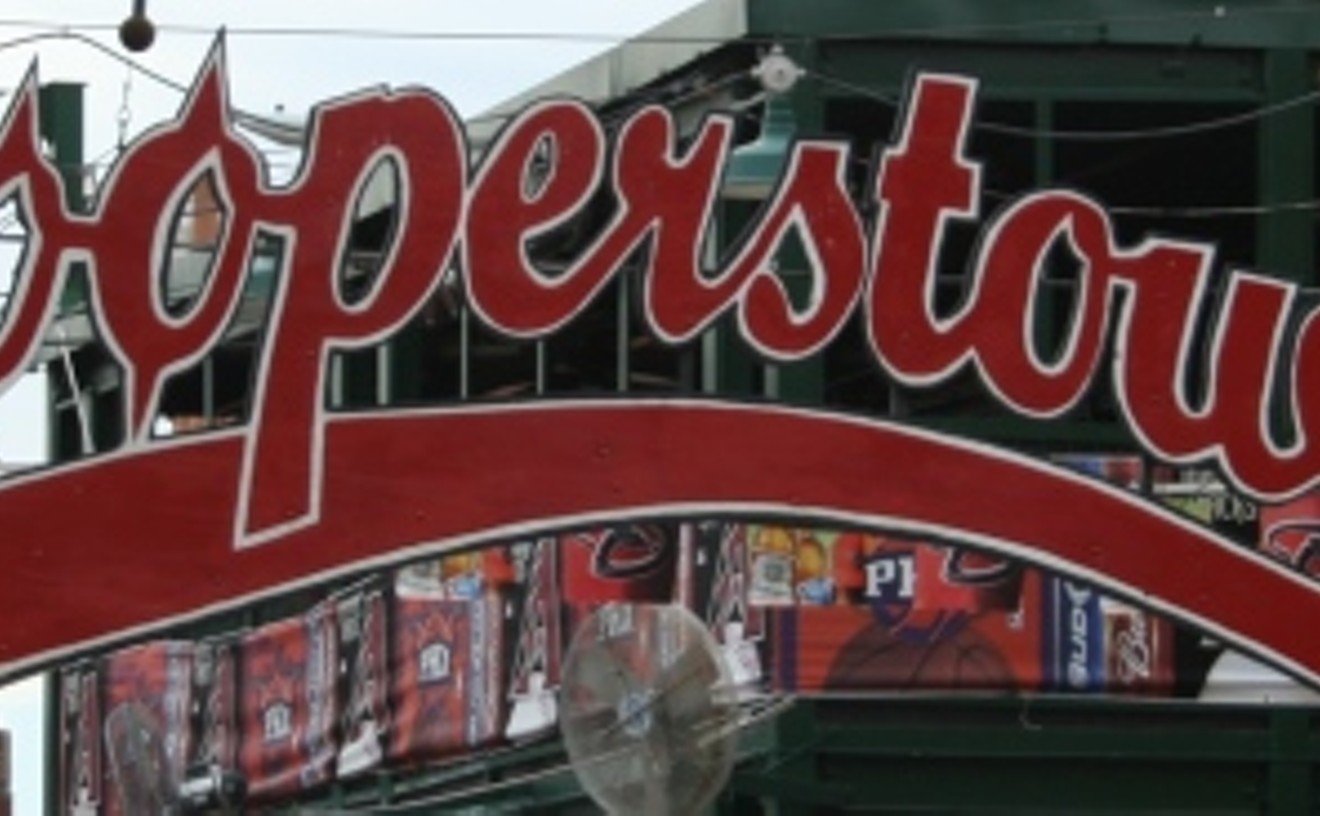 Phoenix's resident shock-rocker is a relic himself, so it's no surprise that a man who's spent more than 41 years recording and touring would accumulate enough rock memorabilia to fill the walls of his restaurant from floor to ceiling. Not only are several of Cooper's own platinum records displayed, but he's got shiny signed platters from dozens of other music legends hanging around, as well as signed guitars galore from the likes of the Grateful Dead, Fleetwood Mac, Dave Matthews Band, Ozzy Osbourne, Santana, and the Rolling Stones.

For a while, there was a mounted boar's head hanging on the wall, courtesy of caveman rocker Ted Nugent. There are also numerous signed photos, set lists, and even signatures all over the walls outside the bathrooms. Clearly, Cooper's got friends in high places. Unfortunately, none of the memorabilia is for sale, but it's all there for the looking. And if your wallet does get antsy sitting in your pocket while you're scarfing down the restaurant's award-winning barbecue, Cooper's got a merchandise stand near the entrance, where you can buy all sorts of Cooper gear, from baseball jerseys to shot glasses. 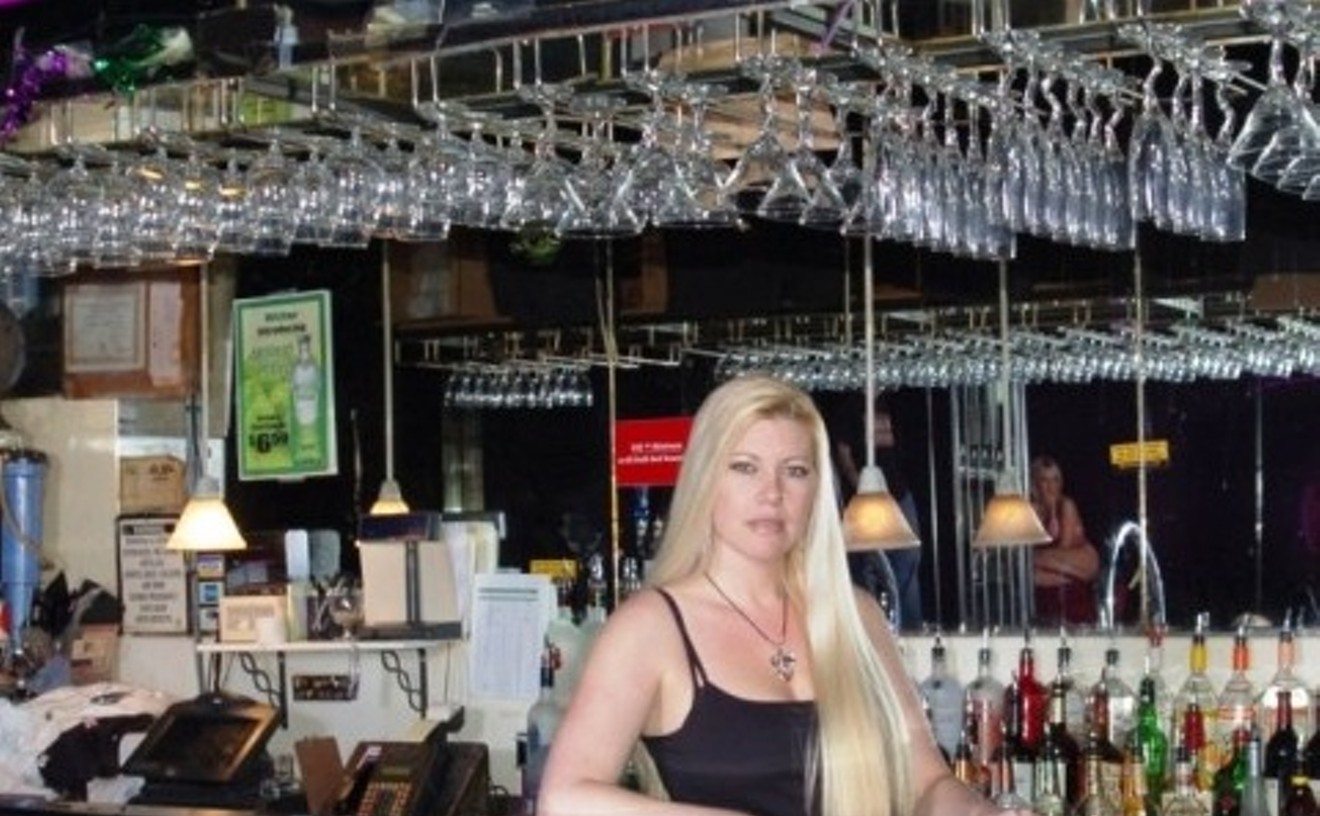 The Hi-Liter is the "old reliable" of Valley flesh palaces. Largely, the eye-candy is young, friendly, and well worth ogling. The strippers tend not to be quite as aggressive when it comes to soliciting lap dances as in other spots. A delightful song-length dalliance (uh, with your clothes on, of course) will cost you only $10, and almost any tip is appreciated. The bouncers are actually helpful, as long as you're behaving yourself. And you can download a coupon from the bar's Web site that'll get you through the door gratis.

What else could you ask for? Well, you didn't ask for it, but here's a little history: The Hi-Liter's been in business in one form or another since 1962; it was a piano bar before it went go-go in the '70s. And, oddly, it had a hand in the creation of what eventually became Hustler magazine. According to Larry Flynt, who explains it all in his autobiography An Unseemly Man, it was while scouting strip clubs in Phoenix back in the day that he spotted a copy of the still-extant freebie adult newspaper Bachelor's Beat. Flynt's Dayton, Ohio, franchise of this PHX pub eventually morphed into Hustler, which now has its offices in a big, black building in Beverly Hills. Class dismissed. So Hi-Liter has another claim to fame other than being an awesome chichi bar, and one of the many places Mike Tyson's flipped out at while living in Sand Land. 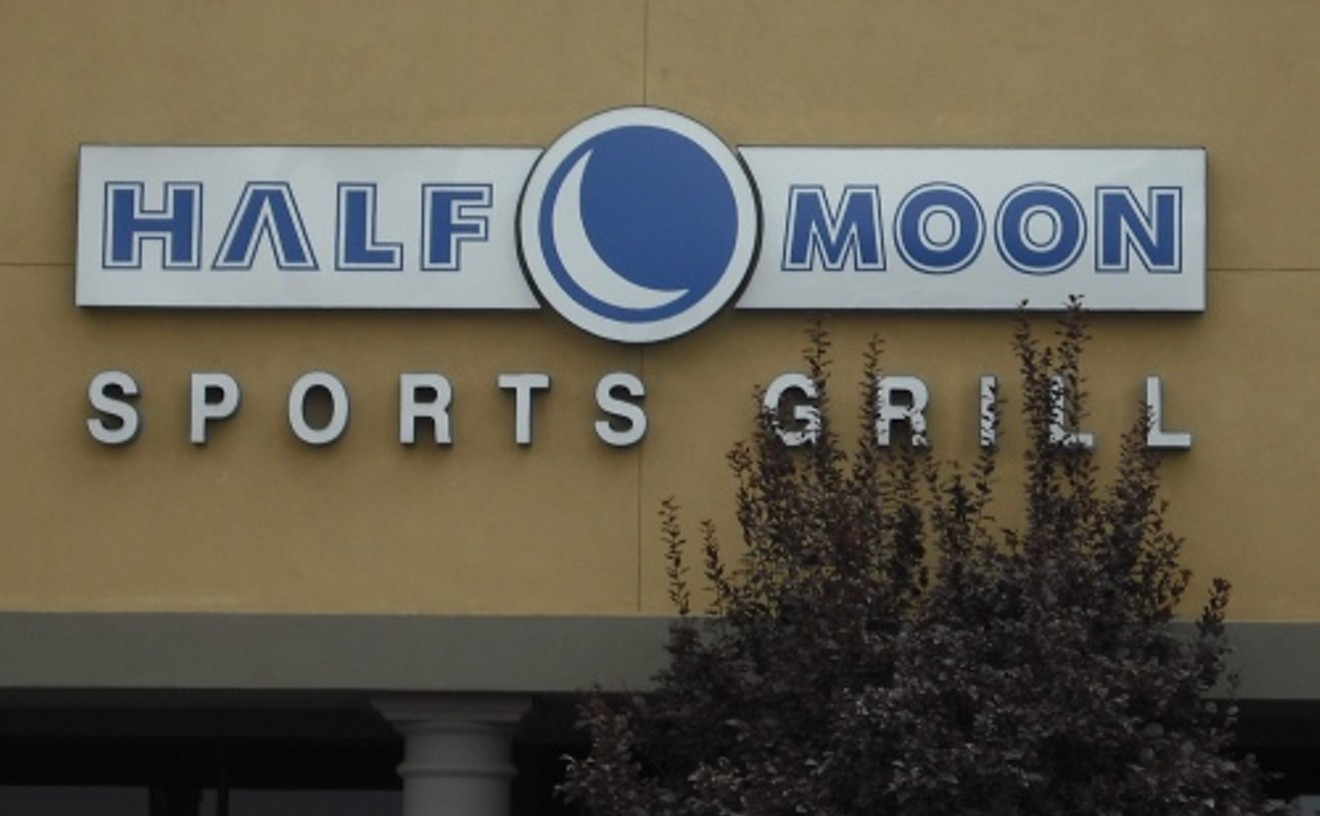 Never has a little butt-crack been so sexy. Seriously. You'll literally see what we're talking about when you check out a Lunar Party at Half Moon Sports Grill. Once a month, women of all ages compete for the distinction of being a calendar girl of the month, which grants winning contestants a complimentary professional sports photography shoot and wall space for a large-format black-and-white image.

The catch? Winners gotta show a little booty, or just enough to expose their half moon. Our favorite calendar girl pinups include women shooting hoops, lining up a bull's-eye shot with a bow and arrow, fiercely smashing a tennis ball over the net, and walloping a volleyball in midair. Drink specials include $2 Pyramid hefeweizens and bargain-basement deals on Skyy vodka cocktails. For once, crack won't kill ya.

Tempe's newest swanky dance club places a premium on a Scottsdale-slick ambiance, sexy red lighting, cherry-infused libations and bikini babes. Yep, you heard it right, bikini gals who slide and grind on a pole inside of a cage. Drool. The space dedicates 3,000 square feet to loungy areas where patrons can ogle beautiful women and 7,000 square feet for booty-shaking, meeting, and mingling. Power hour every evening features $1 Bud Light bottles and black cherry vodka specialties. During each last Thursday of the month, sip on complimentary champagne and learn how to pole dance for free. A tip for newbie visitors: Don't let the faux queue outside the club fool you. One of the club's gimmicks is to make the place look like it's overly hoppin' so that you'll come inside. We can't really blame them, because it's obvious that the Pit is the place to be. 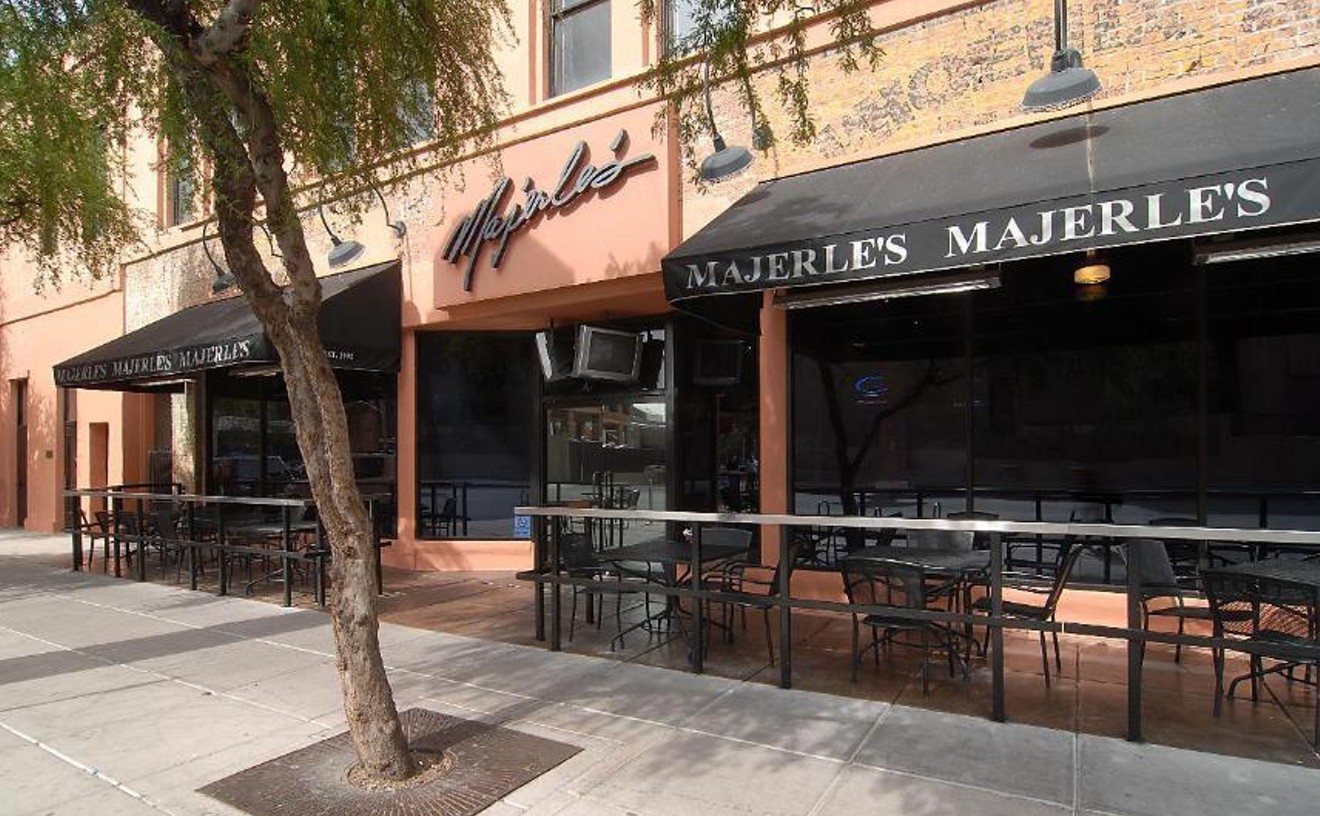 This sports bar, established by former Phoenix Sun Dan Majerle, has a prime spot across the street from U.S. Airways Center, making it the perfect postgame drinking hole for basketball fans and players alike. And while a handful of NBA players have made appearances there, it's the WNBA ballers — particularly our Phoenix Mercury — who make a regular habit of hanging out and mingling after games. Mercury guard Diana Taurasi holds fundraisers for community charities there, with fellow Mercury players like Cappie Pondexter, Penny Taylor, and Tangela Smith.

Sometimes she brings out players from other teams in the league, like her good friends Sue Bird and Lauren Jackson of the Seattle Storm. Fans come out to shake hands and take pictures with the players, who're very accessible and not at all secretive about their favorite watering spot. In fact, after the Mercury's last game of the regular season in 2007 (a victory over the visiting Sacramento Monarchs), Taurasi did an on-court interview following the game and announced to the whole arena, "Now we celebrate with some drinks at Majerle's!"

BEST PLACE FOR A SCOTCH AND A BASEBALL GAME

We've always liked the cozy, dark richness of the Club Lounge at Phoenix's grandest hotel. But it's only now, with the state's smoking ban in full effect, that cigars are strictly verboten and we find ourselves loving the place. With its big TVs turned to the big game and a clientele that includes the kind of guys who might be playing in tomorrow's doubleheader, it's that rarest of combinations: A sports bar that isn't loud, with a great scotch list that never feels snooty.

The thrill of victory and the agony of defeat come in many forms at this West Valley drinking spot. Throngs of sports nuts gather around the 25 different televisions to witness all manner of games and events, from die-hard football fanatics checking out every single NFL contest going down on any given Sunday to motorheads cheering on their NASCAR heroes as they round the track at Daytona. Other sporting events, from motocross to snowboarding, also get plenty of play on the boob tubes here. In the meantime, pool sharks get their fill on the joint's five billiards tables (with free pool daily from 2 to 4 p.m.), while poker pros can try their luck on Wednesdays with no-limit Texas hold 'em all night. Ping-pong and beer pong are another big draw with free paddle action going down on Sunday nights and all day on Mondays and Tuesdays. Wanna get some action? Head for Marc's, bub.