Shelby Moore
Few epicurean delights in the Valley are as saliva-inducing and ultimately satisfying as a pint of lager and a steaming hot pasty — Cornwall, England's culinary contribution to the world. Tempe has Cornwall native Dean Thomas to thank for being on the pasty map, and his off-the-charts success with his two-year-old Cornish Pasty Co. is a testament to Thomas' hard work and originality. With a new location in the works and near-daily offers for franchise deals, Thomas is the living embodiment of the American Dream by way of southwest England. And his ingenuity extends to the multiple varieties of these football-shaped calzone-like pastries that can be stuffed with everything from salmon with asparagus to chicken tikka masala to pork with apple and steak, and potato and rutabaga, as in the case of the traditional "oggie." Our fave pasty, though, is the bangers and mash, stuffed with chunks of housemade sage and pork sausage, mashed potatoes, and grilled onions, with a red wine gravy on the side. Comfort food at its best. For the bangers and mash alone, young Thomas deserves beatitude. Saint Thomas of Cornwall, patron saint of all pasties. And we don't mean those things strippers wear.

You knew it had to happen. After watching so many episodes of The Sopranos for all these years, we'd start hunting down the Italian delicacies they raved about on the show. Little did we know that baccala is a lot harder to come by in Arizona than in North Jersey. Well, we've finally found the good stuff: Veneto Trattoria's decadent baccala mantecato — dried, salted cod prepared Venetian-style. If you've never tried it, it's nothing like the way it sounds, neither dry nor particularly salty. Instead, the snowy white fish is slow-cooked until it falls apart, then mixed into a fluffy, creamy consistency that melts in your mouth. At Veneto, they serve it with the traditional accompaniment of grilled polenta. It makes a fine appetizer, as a prelude to housemade fettuccine or osso buco with saffron risotto, but now that we're so obsessed with baccala, we need a whole plate to ourselves. Whaddaya gonna do about it?

Dimly lit and done up in sophisticated shades of gray-blue and chocolate, with good-looking clientele lounging on plush banquettes and inviting couches, Sol y Sombra is undoubtedly one of the sexiest restaurants in town. But don't get too distracted, at least not until you've ordered dinner — the food here is just as exciting. Executive chef Aaron May and chef de cuisine Walter Sterling have crafted a dynamic, delectable menu that elevates the humble tapas dish to a miniature work of art. Everything is beautifully presented and vibrantly flavorful, from the simple, comforting Tortilla Espanola, a thick slice of potato pie drizzled with garlic aioli, to succulent slices of duck breast with shaved fennel. With a nice bottle of rioja or tempranillo from Sol y Sombra's expertly edited wine selection, you'll be geared up for a leisurely evening of sipping, grazing, and flirting with those cute strangers at the next table. The Spanish would be proud. 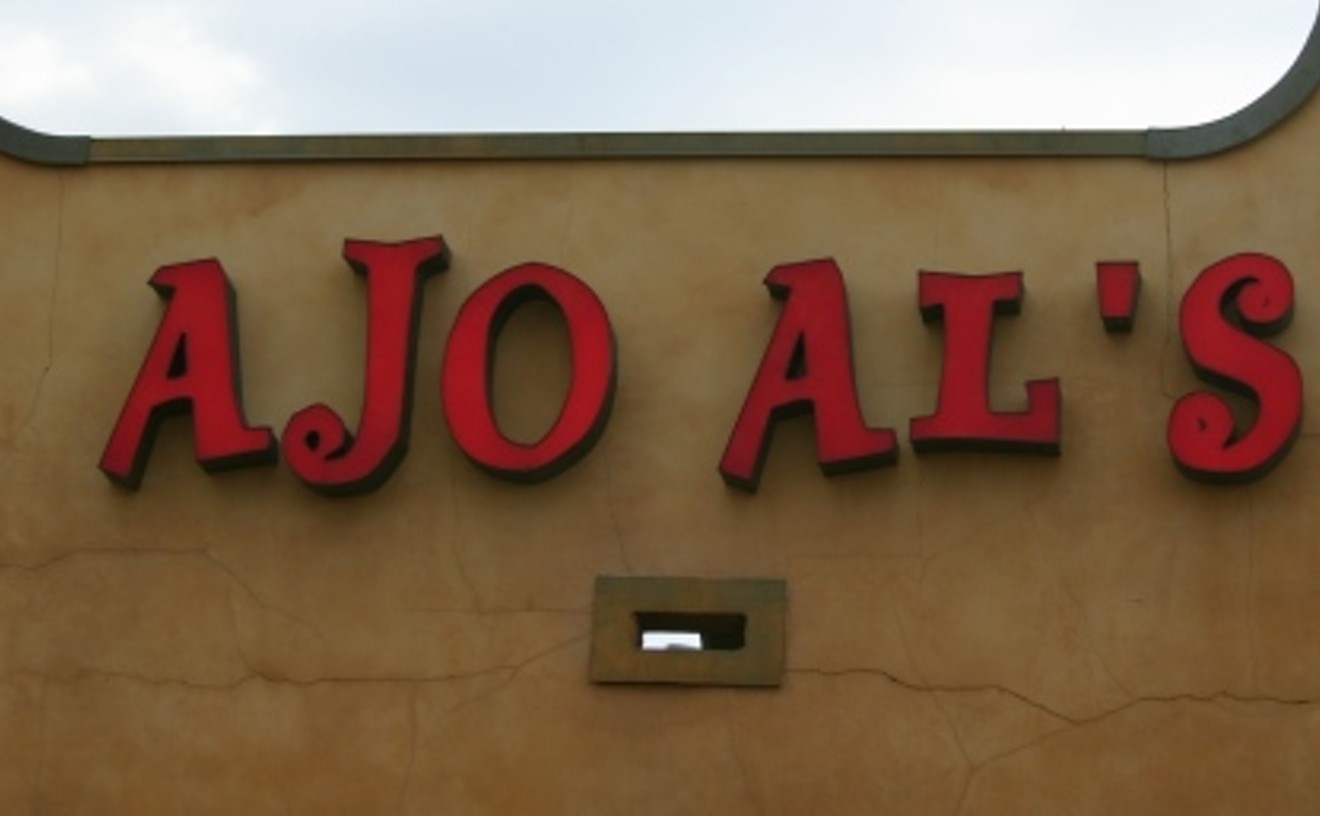 Despite County Attorney Andrew Thomas' failed attempt to ruin this terrific family restaurant with his P.R.-driven "Dirty Dining" campaign (the case was tossed out of court earlier this year), Ajo Al's remains a trusted standby for thousands of spice-happy Valley eaters. We like the food just fine, but it's the chicken soup that brings us back for more, and then more. It's got a bite to it, and a rather thick broth imbued with black pepper and probably more than a pinch of chili powder. The delicious chunks of white chicken meat are too big to swallow in one bite, so it becomes a three-utensil (fork, knife, and spoon) affair, and that doesn't count the mandatory tortilla or two to soak up every last drop. Really, it's a meal in itself and, as a bonus, will clear the sinuses by the time you're done.

Steve and Nancy Kashman opened the first of their two Scottsdale delis about six years ago with a simple formula for success: Build the best matzo ball soup around, and they will come. Though it's a schlep up for most of us up to north Scottsdale, we've found ourselves making the pilgrimage with greater frequency in each passing year. Thanks in large measure to a huge water tank onsite that replicates the spring water of Brooklyn, the soup has a rich, but not-too-salty broth, with freshly chopped carrots and pieces of celery, large chunks of succulent chicken meat and, last but definitely not least, the matzo balls themselves. Jews (and even gentiles) long have engaged in impassioned philosophical debate over the merits of matzo ball-making, as in should they sink or should they float? These babies tend to sink, but they're not heavy. They are fluffy, but not light. They fall apart when you cut into them with your spoon, but they don't crumble. Like manna, they are truly heaven-sent.

It takes more than creamy dressing and Romaine lettuce to make a good caesar salad, and rare is the restaurant that makes one substantial enough to eat as a meal. But come lunchtime, the memorable version at House of Tricks always satisfies. Here, it's a generous heap of fresh Romaine tossed with lightly garlicky dressing, crisp, homemade croutons, capers, kalamata olives, and shredded Parmesan, served on an enormous dinner plate. You can order it topped with grilled chicken, or even anchovies by special request, but go for the silky, pecan-smoked salmon, made in-house. The salmon alone is worth a trip to Tricks — we love to graze on an appetizer platter of the savory fish while we sip Chardonnay at the intimate outdoor bar. But added to our favorite salad, it's the best of both worlds, as light and refreshing as an appetizer, and as filling and flavorful as an entree. If only we could indulge every day. 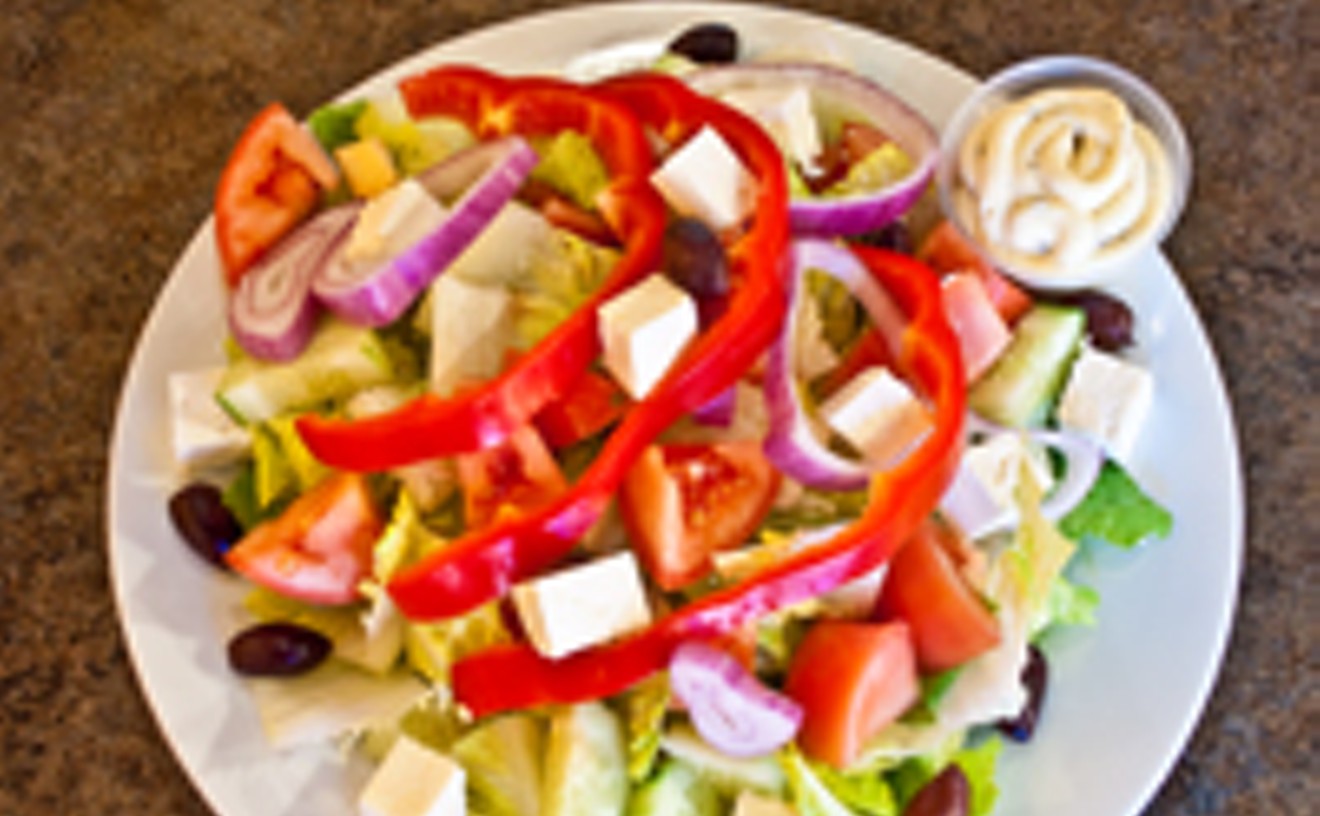 Meagan Simmons
Chef Mustafa's not telling. Tastes like eggplant? Sure, a little bit. Looks a tad like crushed tomato? Yeah, but looks can be deceiving. The spiciness must mean there are some chiles in there somewhere, right? Mustafa just smiles, and asks if you'd like another cup.

It's Chef Mustafa San's secret sauce. Of which his fans — who know the guy as a master of Middle Eastern munchies from his stints at Tempe's Efes Turkish Cuisine and now Mill Avenue's Med Fresh Grill — are quite familiar. The Anatolian edibles at Med Fresh are some of the best and least expensive of their kind in town: kebab, baklava, falafel, you name it. But we're hooked on his sauce, and slather it on everything — pita, rice, meat, everything. Crikey, we'd eat a dachshund if it was dipped in the stuff. The recipe? Mustafa's not sharing. You can guess all you want. He'll even let you take some home for further, um, analysis. But there's only one way to acquire this savory spread, at the Med Fresh Grill, and the cagey Mustafa plans to keep it that way.

Tedd Roundy
Oh, so you think you're hungry, huh? Well, let's just see if you can clean your plate at TEXAZ Grill, where homey, stick-to-your-ribs chow, served in Texas-sized portions, is the tastiest way to measure a person's appetite. It's worth stopping in just for some chicken-fried steak, the hands-down house specialty. In business since 1985, this culinary shrine to the Lone Star State has dished out nearly 660,000 chicken-fried steaks so far, and that comes as no surprise. Here, they double-batter-dip the thin, tender steak, fry it 'til it's golden and lightly crunchy, and then smother it in a velvety layer of pepper-flecked cream gravy. The thing takes up nearly the entire plate, but somehow the kitchen manages to fit a heap of corn, a dense, buttery biscuit, and a generous pile of chunky mashed potatoes on there, too. Our eyes are always bigger than our stomach at TEXAZ Grill, and no, we can't clean our plate, either. But it sure is fun to try.

Roll over, sashimi. Sometimes when we're craving raw fish, we're in the mood for something more exotic than standard sushi bar offerings. When traditional makizushi (sushi rolls) won't do, we head straight for the wacky maki at Sushi Eye. The first time we set foot in this tiny Tempe temple to Japanese food, we instantly knew it was different, from the hip décor to the trance music throbbing on the stereo. Then we took one look at the mouthwatering, photo-filled menu and knew we'd come to the right place. First, the Crazy Horse roll caught our attention with tuna, salmon, yellowtail, and avocado packed into each bite. Next, we indulged in a decadent, deep-fried California roll. Finally, we succumbed to the Second Climax roll, a cucumber and spicy yellowtail maki topped with yellowtail slices, tobiko, wasabi sauce, and crushed macadamia nuts. With more than 50 variations, Sushi Eye's got the goods to satisfy us over and over again. 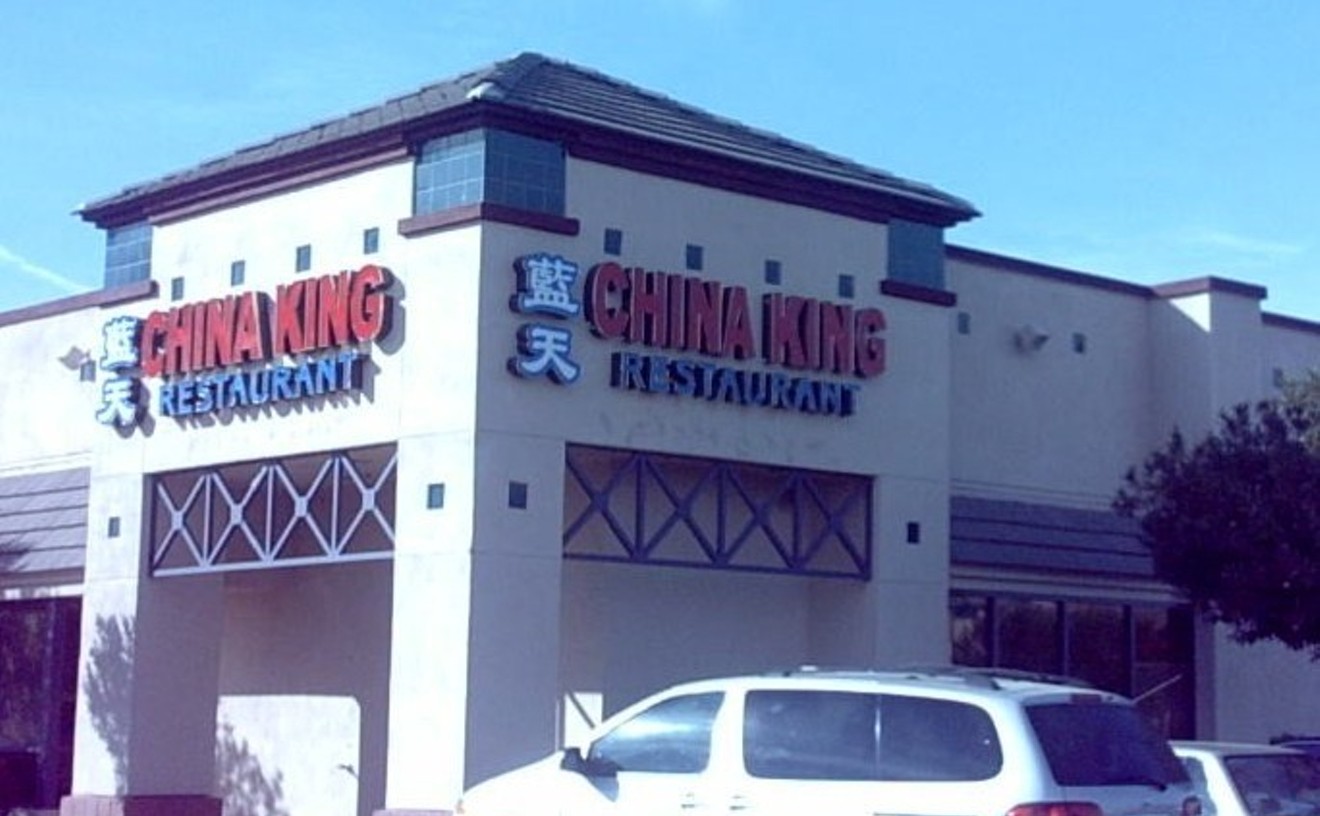 In other big cities, a jaunt to Chinatown helps ease the wanderlust — and quell the hunger for Chinese food — when a trip to Hong Kong just isn't in the cards. But we do things differently here. Nope, there's no Chinatown in the Valley, but there is Chandler, home to an enormous Asian population with a craving for the flavors of home. And when it comes to dim sum, China King reigns supreme. This place is no palace of old-school Chinese restaurant excess, nor is it some hard-to-find hole-in-the-wall. Instead, it's in a spacious, freestanding building that feels like a bustling banquet hall, with families seated at big, round tables while servers constantly make the rounds with their carts. With more than 50 dim sum choices, you never know what delicious dishes might be revealed in the next steamy stack of containers. Could it be shrimp har gow, so moist you can see through their translucent wrappers? How about some sticky rice, wrapped up with pork, shrimp, and fish cake in a tidy lotus leaf package? Maybe it'll be a fluffy steamed bun, filled with sweet chunks of barbecued pork, or shrimp paste fried on sugar cane stalks. Sooner or later, it'll all make its way to your table — even the chicken feet. At China King, everybody gets the royal treatment.