The competition for Best Bigot was fierce. With the debate over illegal immigration raging, there were so many nominees: Sheriff Joe Arpaio, County Attorney Andy Thomas, Governor Janet Napolitano, State Representative Russell Pearce, white supremacist J.T. Ready. It was hard to ignore Arpaio's illegal immigrant hotline. Who can forget Thomas' novel idea of charging illegals with "conspiring" to smuggle themselves into the country (prosecutions be damned)? And Pearce has had a hard-on for Mexicans from way back. He's the one always drumming up legislation to try to keep them out, like the bill that his political ally Napolitano actually signed to prosecute businesses for hiring undocumented workers. Never mind that it won't work and, in the off chance it could, would cripple the economy of the state.

But the guy who gets the nod this year is Rusty Childress, Kia dealer and coddler of neo-Nazis like Ready. Childress hosted Ready at one of his Thursday-night hate confabs at his Kia dealership, when people who would have been attracted to the KKK in another era show up to blather about how much they hate Mexicans. And the political extremists at the meetings didn't end with Ready. Besides J.T., all but Thomas and Napolitano on the aforementioned list have showed up to entertain the rednecks at Childress Kia. It's Childress who's been the behind-the-scenes puppet-master of the anti-illegal-immigration movement here. And... he didn't have to do it to curry the political favor of the Gomers in the electorate, either. He did it because he's dedicated, apparently, to bigotry. He didn't even let the fact that he has no problem selling automobiles to Mexicans get in the way of his dedication to the cause. We say Rusty Childress is the bigot's bigot for 2007.

While it's moved away from its mostly reggaeton format in the past year, Latino Vibe still airs NYC DJ Kazzanova's reggaeton mix in a prime Saturday spot (8 to 10 p.m.), and its own on-air talent — like the lovely Jackie Morales on weekdays and Raul RocDaHouse on weekends — still sometimes spin songs by the genre's breakout stars like Daddy Yankee, Tego Calderon, Pitbull, and Don Omar. "Club 95" has just been including more palatable pop and Top 40 hip-hop in its play lists lately — Nelly Furtado, Shakira, Eminem — and that's not a bad thing, even when we get to a Ricky Martin and Fat Joe collaboration. Because this is a station that's got spicy personality and isn't afraid to play the new Akon song right before some Kumbia All-Stars. They go with what works, but they also try new things —like DJ Ruben S. hosting Latin Ladies Night at Scorch Bar every Thursday, or posting an online community calendar directing listeners to stuff like Spanish tours of the Pueblo Grande Museum and the International Hispanic Games. At 95.1, the Vibe is bilingual and bicultural, but most importantly, it's fun and frisky.

They have big brown muscles, big brown mouths and big brown boobs. But most importantly, they have big brains and huge hearts. The hot, hipster crew from "El Break" is the best shot in the arm of political activism for the local Latino community since Chicanos por la Causa. This is a modern day crop of activistas who have their own rough-around-the edges/cutting-edge AM radio show on Sundays at La Buena Onda 1190. Luis Avila, Nuvia Enriquez, Laura Suarez, Obed Hurtado and others aren't afraid to launch a hunger strike to support the DREAM Act one week, and then throw a blow-out rock en español bash the next, with free-flowing spiked horchata. You can catch their show on Sundays. "El Break" is mainly in Spanish, but even if you are español-challenged, you'll get the vibe and drift from this smart, smart band of radio bandidos.

Albert Lineses III, better known as DJ AL3, has been dedicated to building a better Latin nightclub community since he began spinning mixes around the Valley in the early '90s. With the establishment of Ritmo Latino Entertainment in 2005, AL3 created an enterprise "for Latinos, by Latinos," which has grown to include the hottest weekend Latin dance nights in town. There's Caliente Chica (Fridays) at El Matador and Ritmo Saturdays at Coach & Willie's (both hosted by AL3). The latter night touts itself as a Rocky Point-style party, and with around 800 hot chicas and macho men packing the place, it's hard to argue against that. There's also Climax Sundays at Baby Dolls, where DJ Ruhkas takes over the boards while beautiful babes shake their buns. And while the Ritmo Latino DJs (including AL3) lay the Latin music on heavy, they don't stick to just one style; they're as likely to drop some old school Madonna or a new Sean Paul track as they are Gloria Estefan and reggaeton. But one of the coolest aspects of RLE is its Web site, which offers a slew of downloadable mixes in genres from hip-hop to R&B to house and, of course, Latin.

Her cousin Linda ain't got nothing on her. Marisa Ronstadt is making a name for herself in the music world. After spending years touring locally in Phoenix with different groups including Los Amigos, Pazport, and Straight Up, Ronstadt is starting to get recognized in La-La Land. The South Mountain High graduate grew up rooted by the rock and mariachi sounds of the music in her famous family, while being influenced by '80s pop, old school, and R&B.

She can sing it all. And she's really purty, too. The wildly popular band Quetzal took notice of this homegirl's big pipes and hooked her up with the group Monte Carlo 76, where Ronstadt now sings lead. Monte Carlo 76 will release their new album, Marisela, early next year and then, Ronstadt says, they'll hit the road for a tour.

And we might as well start the rumor mill early. The chisme from Marisa is that the Ronstadt family, led by Linda, could/maybe/might begin work on a project together soon and very soon. We just hope Marisa and the fam call it Brown Bayou. Or Canciones de mi Food City. 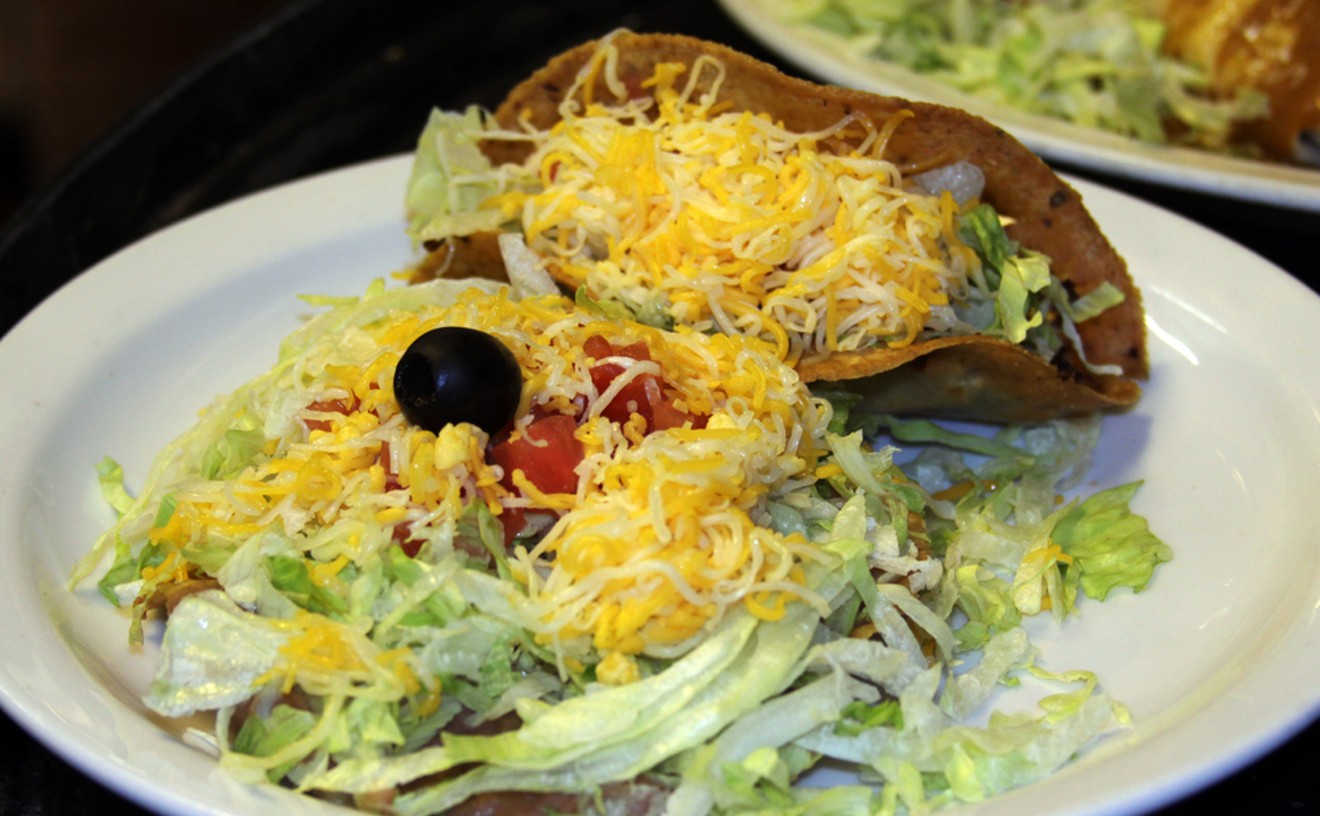 Timur Guseynov
Mariachis at a Mexican food restaurant? Typical, right? The crooners at Garcia's Las Avenidas are anything but. Walk into this old-school Mexican restaurant on a Saturday night and you will hear the bittersweet harmonies of a live mariachi band wafting through the building. Starting at 6 p.m., the band makes the rounds, serenading tables that make requests. The family-owned restaurant serves some of the best Mexican food in town with a friendly, casual atmosphere. Pick your favorite dish — no matter what it is, you'll be satisfied — and enjoy the sweet sounds. Just like the food, the band is always amazing. Their perfectly tuned violins, guitars, viheula, and guitarrón pair with the beautifully harmonized voices to belt romantic Spanish lyrics of love and loss. Despite our best efforts to keep cool, we've definitely felt our skin prickle with chills on a number of occasions. And while it's possible to enjoy them from afar, it's definitely worth it to flag them to your table. They don't just churn and burn the tunes, it's an up-close, impassioned serenade. The repertoire is vast and we've never seen a request turned down. Whether it's the classic heartbreaker "El Son de la Negra" or the gringo favorite "La Bamba," there's no need to worry about repetition — we've never heard the same song twice. With the killer mariachi music, authentic food, stellar service and cozy atmosphere, you'll be ay-ay-aying before you know it.

To paraphrase the moniker of the great James Brown, Andy Herrera (a.k.a. Big Latin) is the hardest-working DJ in the Valley's Latin music scene. When he isn't busy handling promotions for locally owned label Nastyboy Records or bringing big name acts like DJ Kane to town, the stout spinster has spent the past five years working the wheels of steel at dope danceterias all around the PHX. Every Thursday, you can find Herrera over at Henry Jack's Place in Avondale dropping hip-hop and reggaeton, while on Fridays, he's working the turntables at Macayo's on Central, spinning Latin and hip-hop. To top it off, the Hispanic mixmaster serves up plenty of merengue, bachata, and reggaeton at Fuego Bar & Grill in Tolleson. Don't believe our hype? Peep Big Latin's MySpace page for proof of his work ethic, as well as pics of him posing with Def Jam impresario Russell Simmons and even Governor Janet Napolitano (we hear the guv's a big reggaeton fan). 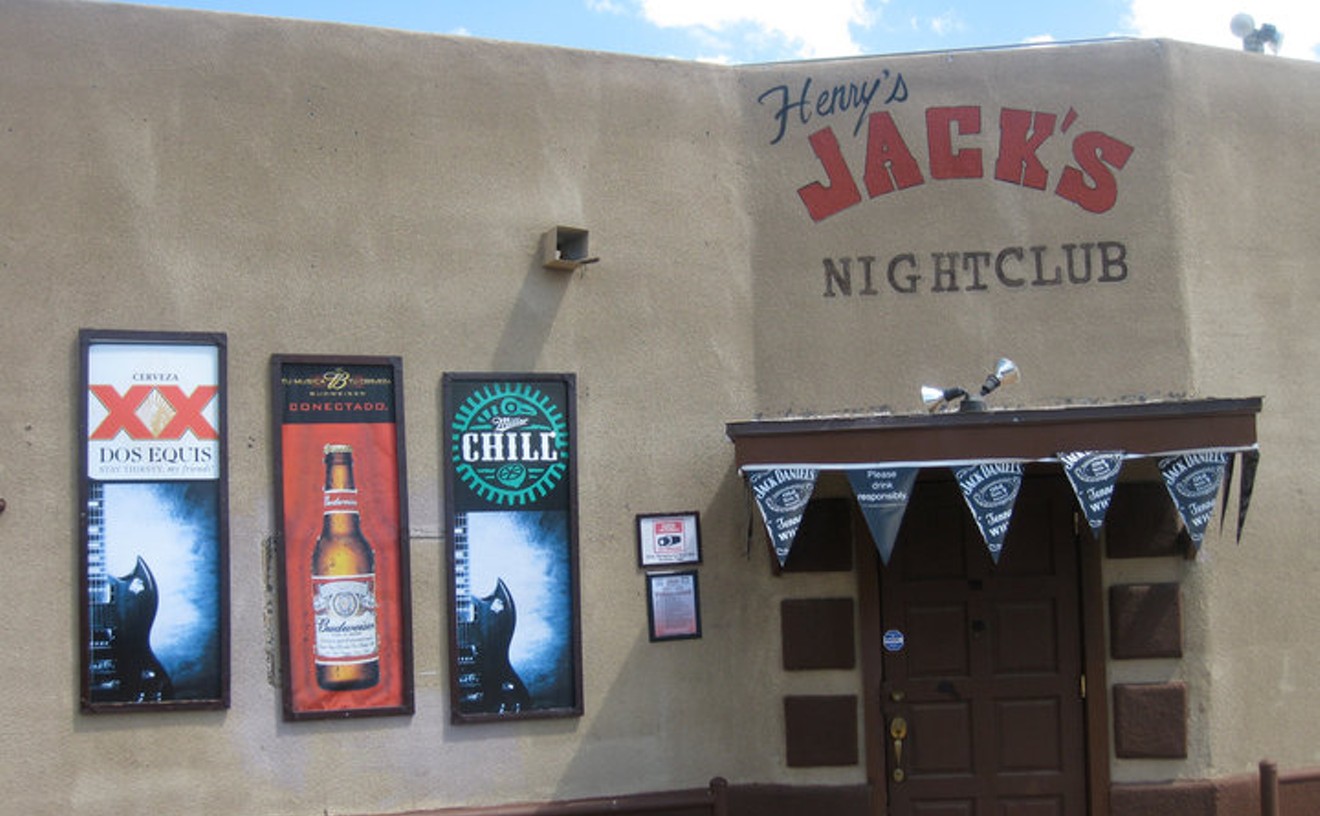 Daddy Yankee gets some serious play on Friday nights at Henry Jack's Place, as does Don Omar, Pitbull, N.O.R.E., and Hector El Father. No, playa-hater, we ain't firing off a list of Latin Lotharios who've been hooking up at this Avondale nightspot. It's a rockin' rundown of the superstar reggaeton artists whose hits are getting spun on the turntables of resident DJ 2Swift. While the weekly dance fiesta usually starts off with the spinster warming up a throng of twentysomething barrio boys and babes with a combination of cumbias and old-school hip-hop, it only whets their appetites for a main course of reggaeton, as 2Swift slings up two straight hours of the popular Puerto Rican-born hybrid of reggae and dancehall with Latin hip-hop, from midnight until the joint closes. Occasionally, he's joined on the decks by fellow reggaeton mixmasters Luis Boy and DJ Ray, who help work the packed crowd into a frenetic fervor as they shake their moneymakers to jams like Ivy Queen's "Libertad" until last call.

Though the dilapidated exterior of Paco Paco makes it look as if it's fit for demolition, inside is a fiery Latin disco-dive that lures in P-Town peeps from across the GLBT spectrum every Friday because of its hot beats, stiff drinks, and unpretentious atmosphere. Bare-chested boys, luscious lesbians, transgender types, and other members of the swishy set reign supreme on a dance floor drenched in multicolored lights while DJ spins circuit music, as well as high-energy Latin house, electro, trance, cumbias, and other dance hits en español. Drag artist Sandra performs her fabbo lip-synched renditions of pop hits, and both ladies and trannies can get in free before 11 p.m. So don't bother waiting in line to get into that other gay Latin joint, when you can always work the scene at Paco Paco. 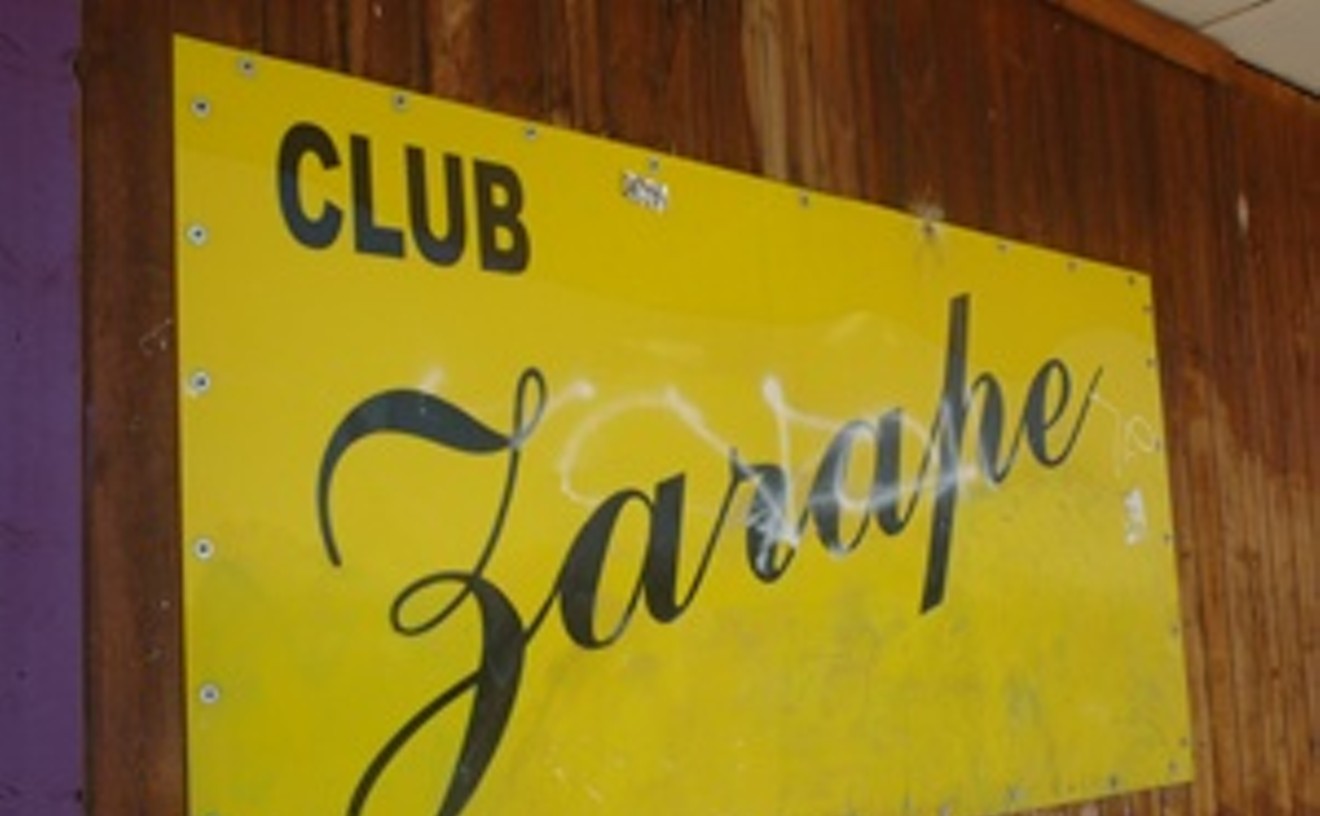 Don't try ordering an apple-tini here. It's a gay bar, but not that kind. No fancy drinks, electronica or twinky go-go boys. At Club Zarape, the standard swill is a can of Tecate beer with a lime wedge and salt packet on top. The place, which looks like the piñata aisle at Food City with all the colored paper and Christmas lights hanging from the ceiling, fills up on the weekends with norteño-style vaqueros who look like they are more ready to rope a steer than each other. But these men, and some leather-booted women, are here to dance the night away to salsa and rock en español and, of course, norteño, vaquero cowboy music. Big belt buckle to big belt buckle. Gaycowboycentral.com even lists the joint. Put on your boots and spurs and don't be surprised if you run into your tio or tata making the dance-floor rounds with a caballero named Miguel.