It wasn't as ill-advised as blabbing about her sex life — or noting something euphemistically suggestive like "Christa is higher than a kite." But Phoenix Mayor Phil Gordon's soon-to-be-ex-wife, Christa Severns, certainly touched off a firestorm when she posted this on Facebook last spring: "Christa Severns is thinking of changing careers and taking up lobbying the city of Phoenix. Hell, everybody else does. I can write a fabulous RFP."

The update was immediately assumed to be a dig at her ex's sister, Gail Gordon, who works as a lobbyist and whose team had been hired by the winning bidder for the airport Sky Train project. The Arizona Republic reported on the comment, reportedly without even contacting anyone it was quoting — and that angered at least one state public information officer to the point that he de-friended his reporter "friends." (Yes, the fallout did remind us of junior high schoolers getting their notes intercepted in the hallway.)

For her part, Severns, communications director for SCF Arizona, handled it with grace; we've heard she's agreed to be a guest speaker in at least one journalism class this fall. And she taught us all a valuable lesson in Media Ethics 101: Reporters are your friends only until they can use you for some really juicy copy. Sorry!

In the current hyper-digital age of instantaneous tweets and Facebook status updates blasting out the latest news and gossip 24/7, it seems downright Luddite to use something as lo-fi as a bulletin board to get the lowdown on downtown Phoenix culture. Such is the case with the bulletin board on Fifth Street in front of the Tumbleweed Center's Drop-In Gallery, as we regularly check out its colorful cornucopia of Xeroxed fliers, silk-screened posters, handbills, and other DIY ephemera for the latest events and announcements. Erected last fall by the community-minded cats at the gallery (which features works by homeless artists), the cylindrical-shaped board has clued us in on upcoming indie and punk gigs, future gallery exhibitions, local bicycle co-ops, and a nearby organic garden. (There's often also info on chemtrails, UFOs, and other tinfoil-hat topics.) A few hand-written missives are also occasionally pinned up, including one hastily written note asking God, "Why hast thow [sic] forsaken me?" Dunno, but thanks for asking.

Best Lo-Fi Way to Get Answers

Imagine this: You need answers. But you're not sitting in front of a computer or within reach of an iPhone. Never fear, telephone reference is here. Forget Google, and Wikipedia — at the Phoenix Public Library telephone reference desk, real people are ready to answer your calls and give you useful information. Picture the Katharine Hepburn movie Desk Set, in which Ms. Hepburn plays Bunny Watson, the head of the well-run research department at the Federal Broadcasting Company. Bunny's world is full of reference books and chatty banter, and the filmic predecessor to PPL's Telephone Reference department. Need to know the population of Vatican City, or the year Wade Boggs was inducted into the Baseball Hall of Fame? Telephone reference is only a call away. Oh, sure, the librarian on the other end of the phone might do a Google search to answer your question, but isn't it nice to know you can still pick up a phone and speak to a human being? One note: The staff cannot give medical advice.

Art crimes move from the street and into a legal art space during this yearly exhibit. Curated by graffiti and gallery artist Mad­One, the show showcases adhesive art as well as one-of-a-kind screen prints by urban artists from around the country. The show, which usually hangs in the winter or spring, has exhibited at various downtown spaces, including HoodRide Bodega and Space 55 Theatre, so check out the Spraygraphic Web site for future show details.

As high-rise condos and huge developments, like the proposed CityScape, start crowding downtown Phoenix, the arts community is bracing to be overrun with chain stores. That's why we're glad to see places like the Alta Space Gallery crop up in a new condo building. Rather than crowding the bottom floor with a Pottery Barn or an American Apparel, Alta Group built an art gallery adjacent to their leasing office. The space is open and airy, with stamped concrete floors, exposed ductwork, and two walls of floor-to-ceiling windows. It's too early to tell exactly what niche the gallery's artists will fit in, but the opening show of sculptor Pete Deise's miniature "Tangle" sculptures on concrete pedestals, combined with contemporary encaustics and wall reliefs from the eye lounge artists, gives us hope that the gallery means to showcase local artists and not sell out to national well-knowns.

Valley residents are tired of hearing how two of their beloved 'burbs (Mesa and Chandler) rated in Forbes magazine's Top 10 Most Boring Cities. So we were thrilled to see Ron Floyd, a well-known art professor and president of the East Valley Art Guild, unveil a new multi-purpose art space in a historic downtown Mesa storefront in mid-September. The SunDust Art Gallery is a new permanent home for the Art Guild, which has over 250 members, from high school students to an octogenarian grandmother. The light, airy space also features two art galleries and art storage space, and Floyd plans to host monthly music events, poetry slams, and art classes. If SunDust is any indication, Forbes can take its list and shove it next year. 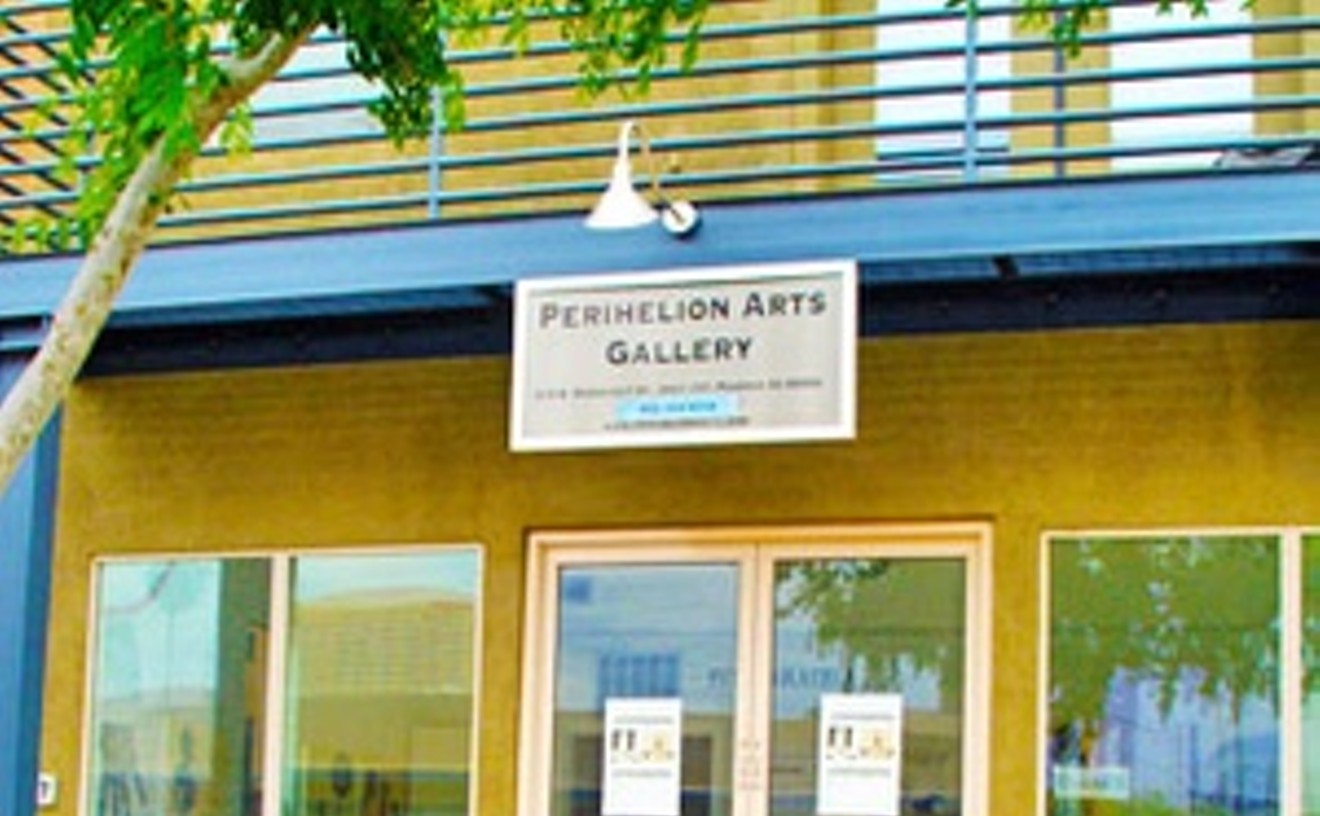 Just as we were wrapping up our Best of Phoenix issue last year, Perihelion Arts made its move. Literally. The gallery moved from the corner of 15th Avenue and Grand to the north side of Roosevelt, along the same strip as Tammie Coe in the Artisan Village complex. Since then, 2009 has seen Roosevelt explode to full capacity on both sides of the road. Gone are the days that walking the north side meant a lack of people-wading. Now with Perihelion, we've noticed a hemorrhage of art walkers flooding the gallery on a monthly basis to see wonderful national and local artists — some of our favorites include Daniel Martin Diaz, Mike Maas, Suzanne Falk, and Rachel Bess. As much as we love Grand Ave, there's no denying that Roosevelt, with Perihelion's sister gallery Pravus (winner of Best Move last year), eye lounge, Five15, and Modified is where the action happens. And with such wonderful art coming through Perihelion, we're relieved more get to see it. Well done, Perihelion . . . Well done.

We reckon Justin McBee must have a third-degree black belt in the skill of combining art and music to create mighty big blowouts. The wacked-out wingdings he and former cohort Scot McKenzie conjured up at .anti_space over the past five years are the stuff of downtown Phoenix legend, like after-hours underground electronic noise fests at the gallery's old home at the CheMLAB building. The 34-year-old hooked up with a new partner-in-crime in Bradford Still (the scenester DJ behind the former 602uesdays electro bacchanal at the now-defunct GLAM) to put on a bona fide bonanza of art and music at their pad Studio+ for 2009's Art Detour weekend. For three days, the 1920s-era bungalow hosted the "Primeval Ancestry" exhibition showcasing colorfully bizarre pop art paintings by Yuko Yabuki, the power-packed photography of Edward "PHOTOHOE" Castaneda, short films by Sarah Breidenbach, and the always off-kilter cartoons of art provocateur Luster Kaboom. Festivities continued for two straight nights, including a sendoff on Saturday featuring Sean Watson, Djentrification, and Nico-Teen on the turntables, as well as indie rockers Babaluca and Hooves performing in the front yard. The fete should've gone until 4 a.m., but the Phoenix Police Department shut it down long before then. Party poopers.

Best Place to Be Seen on First Friday

Fifth Street, between Roosevelt and Garfield

It's estimated that an average of 11,000 people turn up in downtown Phoenix during any given First Friday. And as far as we can tell, it seems like every last one of these souls is attempting to jam in and around the intersection of Fifth and Roosevelt streets. We're not effing with you, bub. Imagine a cattle call for the next American Idol, and then multiply it by 10. And the reason the crossroads has essentially become the epicenter of the monthly art walk? That's a no-brainer: There's so much cool shizzle happening at once that it's like experiencing art-scene ADD. In addition to the standard block party and street fair organized by the Roosevelt Row co-operative, approximately two dozen primo galleries are 100 feet away in any direction. Street entertainment is always readily available, be it B-Boys breakdancing, bands like Mondegreen and Back Ted N-Ted staging open-air concerts, or the friendly freaks of the Strange Family Circus pulling off daring (and painful) feats. Whew. Seriously.

Best Place to Be Seen on Third Friday 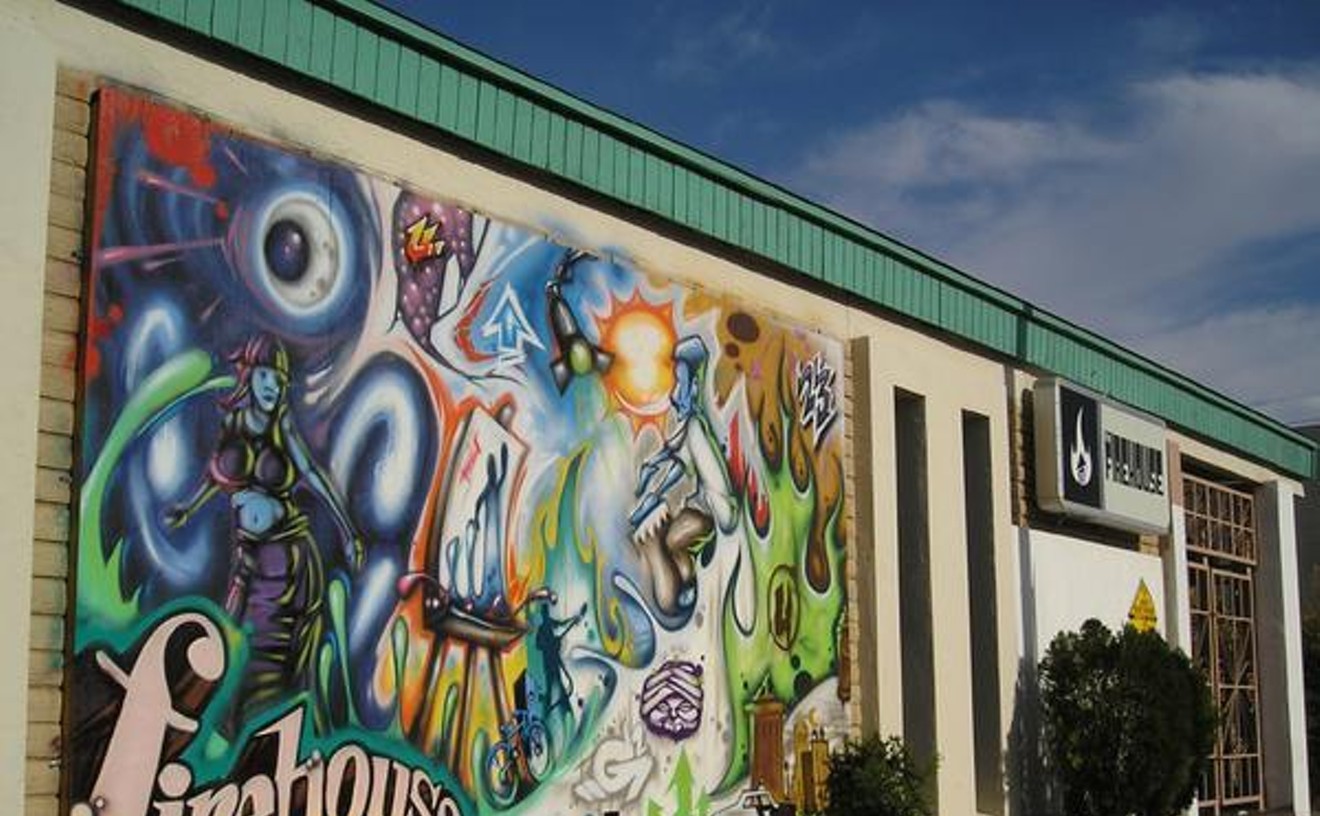 We fear the day when downtown's quirky galleries start becoming gentrified in the name of "revitalization." Until then, we'll make sure to spend our Third Fridays people-watching at the most bohemian of them all — the Firehouse, a collective with live/work space for nine artists, and a gallery-slash-retail section in the front. The once unassuming white building now calls out to locals with bright graffiti murals and a performance stage in the backyard. Third Friday is "Fire Stage," an evening of poetry, music, and fire dancing hosted by local poet and Torch Theatre grad Ernesto Moncada. Anything goes at this eclectic event. On any given Third Friday, you might find poetry readings, tribal belly dancers covered in henna tats, or the accordion stylings of Nightwolf's Andrew Jemsek. Chat with the Firehouse's resident artists, who are always milling around during the event, or pop inside for a peek at the new "23" retail collective, where you'll find handmade local goods including leather wristbands, recycled jewelry, and photo art by Firehouse regular Kevin Patterson.