We've changed our standards for judging the state's best wines this year. The winners have to be available at retail outlets in the Phoenix area. Arizona's wine industry is still relatively small, and most labels are only available in tasting rooms or from the wine clubs of the vintners. Case in point: The most honored white wine in the state this year was Pillsbury's 2015 Bonnie Lee malvasia, which was the only Arizona wine to win a Best in Class at the prestigious San Francisco Chronicle Wine Competition in January. But we couldn't find the malvasia at any local outlets. That's why we selected Pillsbury's 2015 WildChild White, which we found for around $20 at Total Wine and AJ's Fine Foods. The WildChild from film director Sam Pillsbury's vineyard always has been a favorite, and it was awarded two gold medals in San Francisco. The dry varietal is a blend of chenin blanc, riesling, and viognier grapes. It paired perfectly with walleye served hot off the grill.

In this category, the judgment of the experts worked beautifully with the availability of the wine. The 2015 Aguileon totally dominated the 2018 AZCentral Arizona Wine Competition, winning both Best in Show and Best Red Wine for winemakers Todd and Kelly Bostock. It's another blend, primarily of Spanish tempranillo and graciano grapes with a taste of cabernet sauvignon, cabernet franc, and petite syrah tossed into the vat. We found the wine, priced around $30, at both Total Wine and AJ's Fine Foods. We took it home and immediately tried it with a seared porterhouse, medium rare, and the bottle was empty just like that. It's well worth the price and the accolades.

Arizona Wilderness fervently scratches a checkmark next to every imaginable item that might appear on a craft beer lover's list of prerequisites. First: the beer. Ingredients specific to Arizona's wild outdoors, and seasoned brewers with a penchant for creating trailblazing recipes, set this brewery head and shoulders above the rest. Many breweries, especially when they start out, defer the option of food and just focus on the concocting of the suds, so to speak. Fair enough, but that doesn't cut the mustard when looking for the absolute best. The grub options at Arizona Wilderness are as decadent and inventive as the award-winning beers it produces. The final check — and this is crucial — is the overall vibe. There is nothing contrived in the air when you walk into either the original Gilbert brewpub or the new wide-open beer garden that has added a fresh burst of integrity and grit to downtown's Roosevelt Row. There's a sense of trust and community that you immediately feel with both the staff and fellow imbibers. Craft beer lovers can sniff out a half-hearted attempt at a brewery, but Arizona Wilderness passes with flying colors. 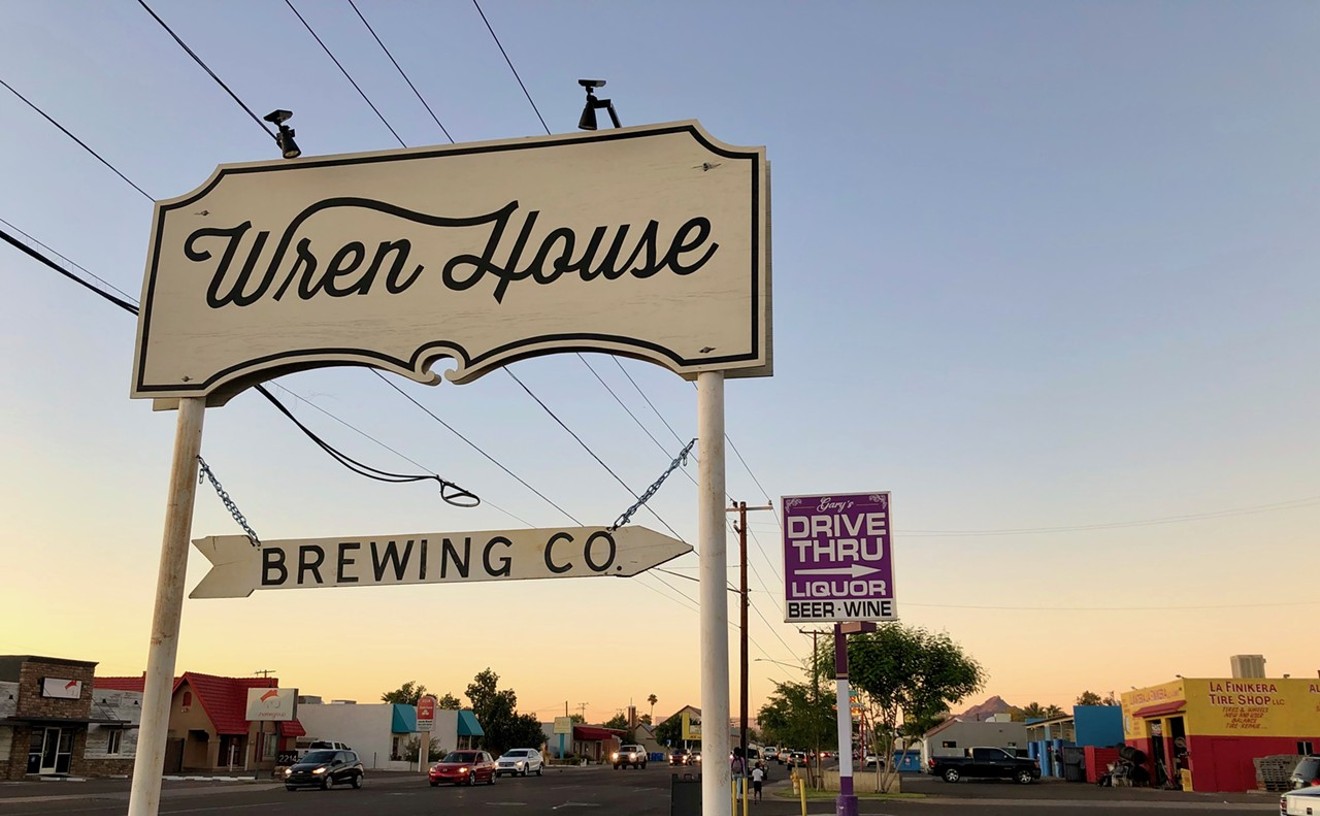 Stout? In Phoenix? Stouts have a reputation for being weighty beers — not the best desert drinking. But not all stouts are overly sweet, ABV bombs, bitter, or too sharp with oak from slumbering in the barrel. Wren House's Jomax Coffee Stout is a stout that doesn't punish you with alcohol, instead showcasing rare finesse. A coffee flavor built from Ethiopian beans roasted by Press Coffee comes in evenly, pleasantly, about on the same level as the rounded maltiness. The coffee and malt blend seamlessly, neither dominant. This stout has a luscious, creamy mouthfeel, swishing around almost like melted ice cream. Coffee is added as beans during brewing and as cold brew at the end, making the roasty notes mellow and multidimensional, even introducing a touch of stone fruit. Hell yes, stout in Phoenix!

The Phoenix beer scene is so young that breweries with a few years of experience feel like sagacious veterans. Brian Helton of Helton Brewing Company, on the other hand, has brewed beer for a few decades. Sitting at the bar in his taproom on Indian School, you can glimpse him working through a window to the capacious brew room. Helton's range as a brewer is vast. He crafts a luscious, malty Scotch ale that keeps things traditional. One of his signatures is pilsner, an ancient style with modest, restrained flavor. But Helton also loves to brew on the other end: huge, forward-looking beers with explosive flavor. Think rye IPA with whole-leaf hops. Think extra-brut IPA. And think his cult-classic boysenberry sour, with refreshing tartness rounded by the smooth flavor of fruit brought in from Oregon — one of the best fruited sours in town.

Josh and Jason Duren have created a cidery like no other. A communal vibe pervades the spacious tap room, which now spills out to a patio, the place having recently expanded (and added Myke's Pizza). The brothers think way beyond the apple. They pour hazy ciders. They pour blue ciders. They pour cider with black tea, with lemon, with the flavors of oak and vanilla slowly imbued during barrel-aging. Nowhere on the menu do things get as next-level as they do with Purple Heart, a cider with an earthy, mossy sweetness. It's made using butterfly pea flower and ingredients that emulate cascara, the typically discarded coffee cherry. When you sit down at Cider Corps, you sit down to an apple-driven adventure that takes you to new places, most of them brilliant.

This Prescott-based meadery has a Phoenix location in the works and currently distributes to some of the better bars and bottle shops in town (and it's sold at AJ's Fine Foods). Jeff Herbert, head mead master, has brewed hundreds of kinds of honey wine. And these aren't the sugar bombs that most meads are, the kinds of meads that give mead its questionable reputation. Herbert ferments bright, balanced honey wines that are as finessed and drinkable as a slow-sipping saison or your favorite poolside vino. And he uses Arizona honey. Look for short pours from great craft destinations like The Wandering Tortoise, and bask in Herbert's weirder creations. His smooth peanut-butter-and-jelly mead is a 13 percent ABV love song to your taste buds that will forever change how you think about the possibilities of fermentation.