It hasn't taken long for 22-year-old Youceff Kabal — who makes beats that straddle the thin line separating chillwave, ambient hip-hop, and electronic pop — to establish himself as a presence on Phoenix stages alongside touring indie stars like Toro y Moi, Phantogram, and Youth Lagoon. Kabal's quick rise is due mostly to his way around a sample board, and he's made waves across the blogosphere with his own tunes and his remixes for groups like the Swedish collective Newtimers and Brooklyn's How to Dress Well. What Kabal does next — whether it's turning his attention to remixing and producing for local artists or taking the stage solo — only looks to further illustrate how far ahead of the curve he is.

This year has been a pretty damn good one for Guided by Voices fans. Not only did main man Robert Pollard reunite the "classic '93-'96 lineup" for three albums — Let's Go Eat the Factory, Class Clown Spots UFO, and the forthcoming Bears for Lunch (in addition to Mouseman Cloud, another in his torrential downpour of solo records), but the year saw the return of the nation's best GBV tribute band, Secret Fox. Featuring Jim Adkins (of Jimmy Eat World) and members of The Secret Lives of Painters, the band celebrated the return of Guided by Voices with a reunion gig of its own at Crescent Ballroom after 10 years of inactivity. The band didn't stick to the classic lineup repertoire alone, dipping into "Guided by Verde"-era power pop, too, but there were Pollard-style high kicks. Oh, yes, high kicks galore.

While the birthers and xenophobes who patrol the border might too easily forget it, Arizona is a land of transplants and exiles. Dig around and you're likely to find little pockets of culture from all around the globe in our neighborhoods and boroughs. Still, no one is going to blame you for being surprised by The Bad Cactus Brass Band, an honestly authentic New Orleans second-line-style brass combo. But the band does, indeed, call Phoenix home, musically transporting the sounds of Big Easy burgs like Treme and Central City to CenPho and Tempe gatherings. If only we could get someone to bring proper yaka mein to Phoenix, we'd be all set.

Bears of Manitou has drawn plenty of fans around Phoenix for its indie-folk tunes, but its members have managed to attract attention beyond that, staging the kind of interesting marketing stunts that get fans involved and laughing. A few days after the debut of Call-In Oates, a phone service that allowed fans to dial an 800-number and play some lo-fi selections from the oeuvre of blue-eyed soulsters Hall and Oates, the Tempe-based band quickly seized the fever, launching their own toll-free call-in line and even offering fans a chance to order customized songs through their Facebook pages. Any band can Tweet into the World Wide Black Hole — but bands like Bears of Manitou make the social marketing feel, well, social.

While everyone in the electronic game has tripped over themselves to call what they do something else — chillwave, dancecore, bit-pop — Mercurius FM has stuck stridently to his roots, calling his May 2012 mix This Is Techno. Mercurius routinely updates his blog with gloriously old-school remixes of artists like Usher, The Beastie Boys, Prince, and his own analog compositions. He's also quick to call out the status quo — in a recent blog post, he criticized the current rodent king of EDM, deadmau5, saying "producers like him have taken the skill and art of performance and cheapened it down to button-pressing." Mercurius doesn't position himself as better than anyone else, and that's the glory of it all: He simply doesn't have to.

Valley rock 'n' roll icon Keith Jackson has been ambling around Phoenix's music scene for more than two decades now. The genial 6-foot-6 guitarist, who skillfully wielded a six-string in such landmark bands as Beat Angels and Glass Heroes, has experienced plenty of wild misadventures during that time. Jackson's got the stories to prove it and is more than eager to spin some interesting yarn about the old days. In addition to having a gift for gab, he also has a certain penchant for slipping in mentions of the many rock stars that have crossed his path. Catch him at a preferred haunt, like the Eastside Tap & Grill, and Jackson will gladly dish over beers about Steve Jones from the Sex Pistols giving him a vintage Gibson Les Paul, all the times he's partied and recorded with former GN'R guitarist Gilby Clarke, or the gig where one of his old bands opened for the MC5. The most frequent topic of conversation, however, is his friendship with the late Joe Strummer. The local ax man often gets a goofy grin when he talks about how he idolized the legendary frontman for The Clash, who passed away in 2002, and their many hangout sessions. Jackson's tales are always told with a certain charm, so you don't seem to mind all his name-dropping. Shit, if our lives had been as exciting as his, we'd probably do the same.

Best Place to Catch EDM Stars Under the Stars 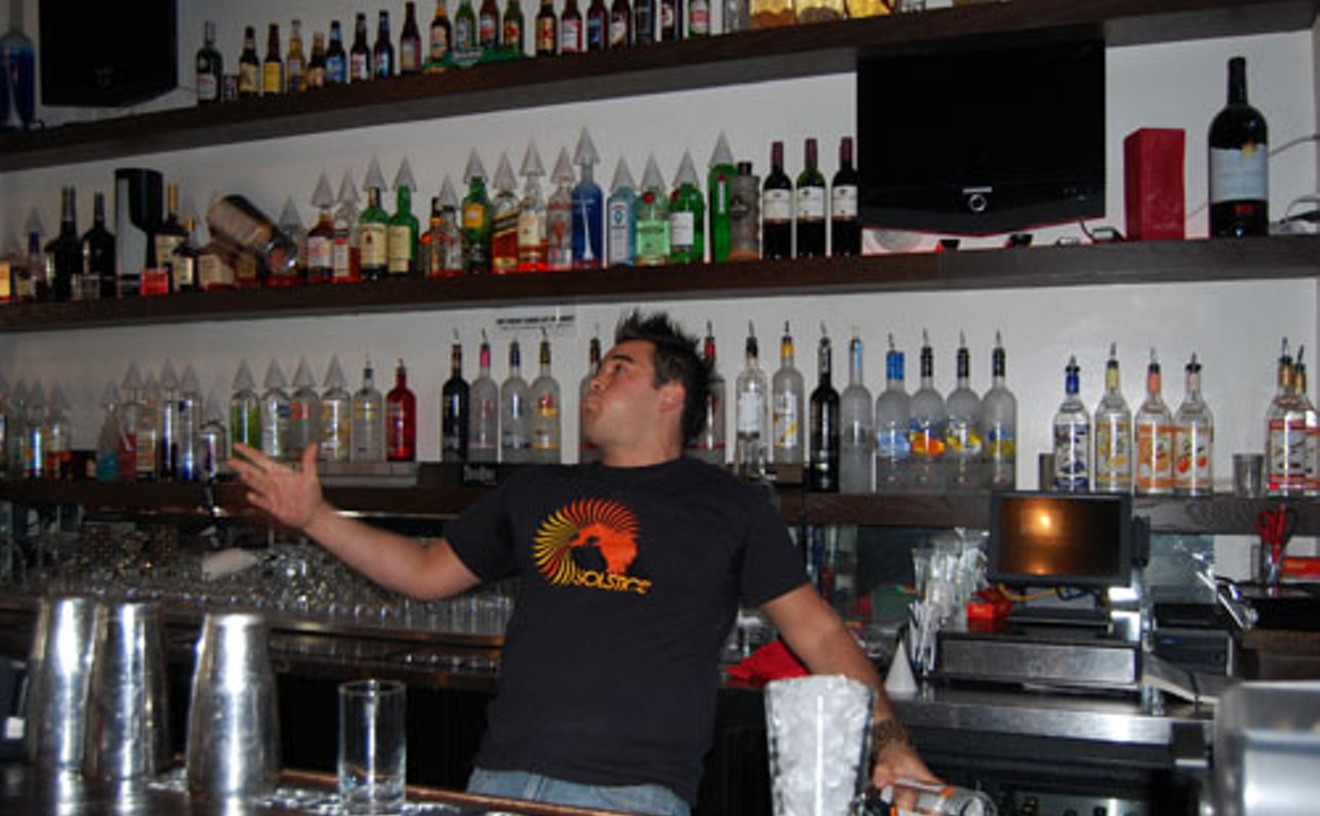 When Steve Aoki and his cohorts from Dim Mak Records kicked off their DeadMeat tour at Comerica Theatre this past January, this all-star ensemble of EDM talent was backed by a massive stage setup rivaling that of major rock concerts. Millions of LED bulbs illuminated a towering backdrop and six-foot-tall DJ riser, as well as glow panels spelling out Aoki's name in bright lights during his headlining set. As flashy as this eye-catching orgy was, it wasn't as fun as when Dim Mak brought its previous tour to the open-air setting of Bar Smith's rooftop a few months earlier. Same goes for any other electronica artist who passes through the Valley. Flashy multimillion-dollar stage displays can't hold a candle to the more lo-fi thrills of watching EDM stars like electro fiends Blatta and Inesha perform against a backdrop of downtown Phoenix skyscrapers while stars twinkle overhead, warm breezes blow through, and abstract movie clips are projected on the wall over the rooftop bar. With all due respect to Bar Smith's next-door neighbor, this is the true sky lounge. 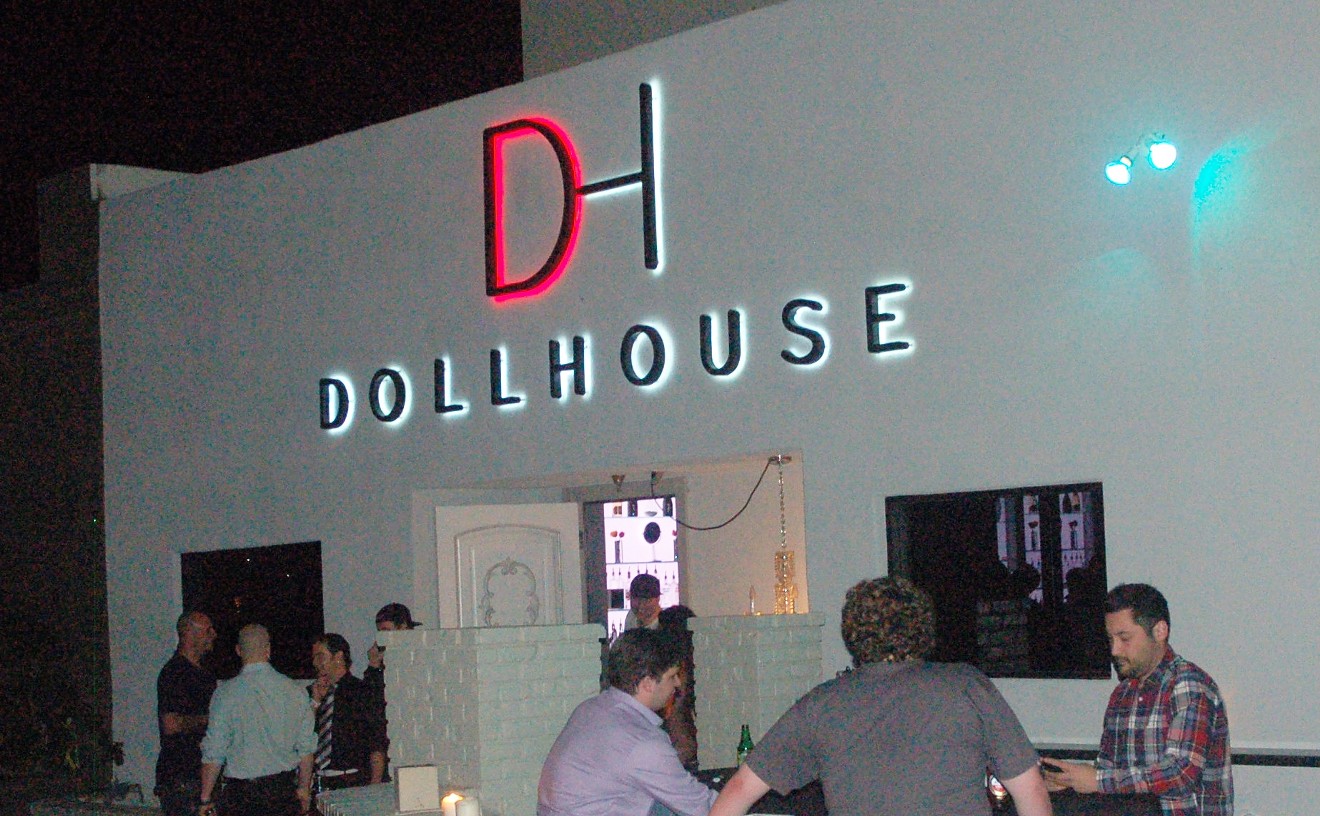 It seems everyone wants to spend a night at the Dollhouse, but there's never enough room. Hence the lengthy line of would-be clubgoers that seems to be a permanent fixture outside the front entrance. One of the reasons why people are desperate for a golden ticket into the glitzy Indian Plaza drink parlor is the desire to be seen by the many pairs of eyes that are about. Glamorous-looking gals debut their newest ensembles, accessorizing with a high-end cocktail or two created by the Dollhouse's resident mixologists. Pulsing light panels on the walls provide flattering illumination, permitting one to look their best should any celebs or pro athletes drop by the Dollhouse, which has been known to happen. Good thing the VIP section has a clear view of the dance floor, allowing the chance for you to strut your stuff whenever a member of the glitterati is in the house. 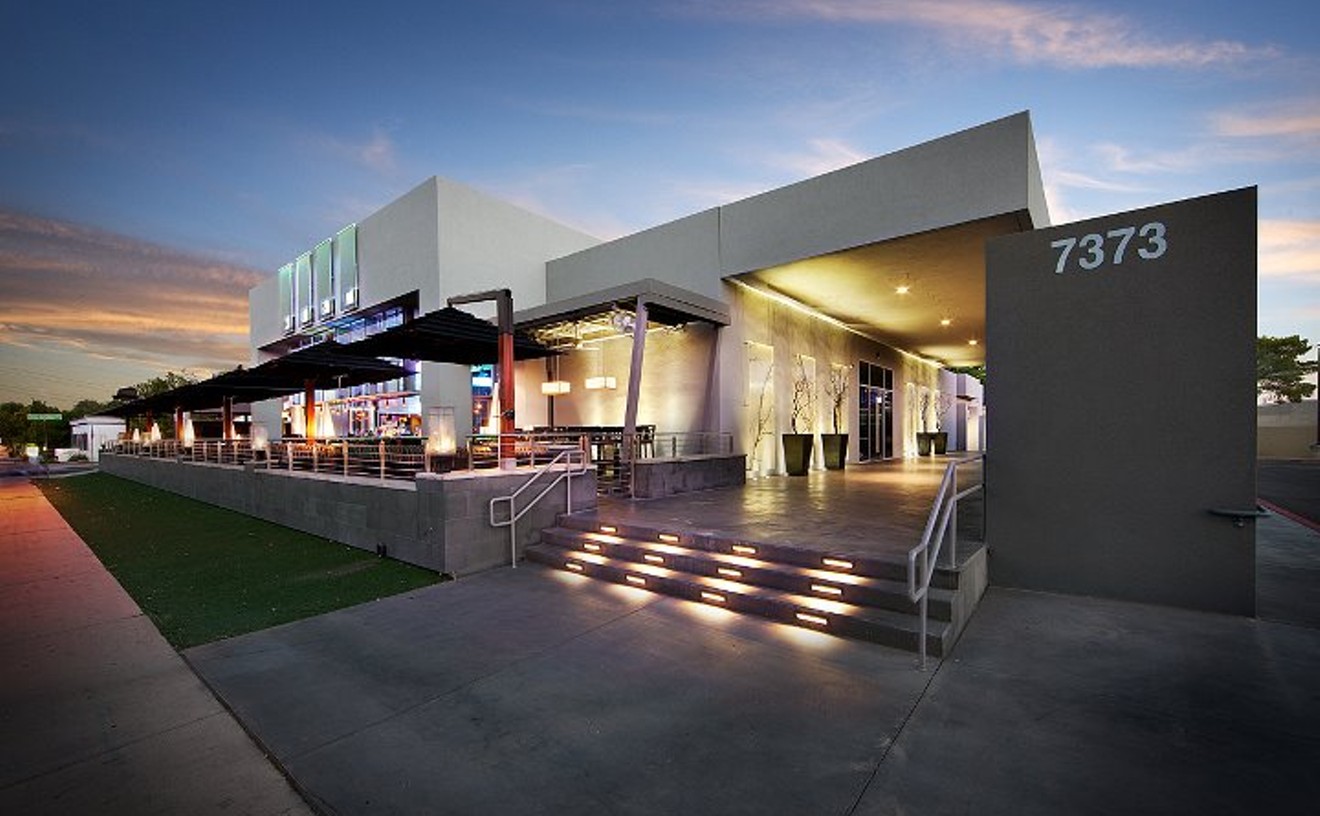 Of its many upscale amenities — resort-like cabanas, delicious Asian fusion small plates, the Swarovski crystal chandelier, and the always-mesmerizing LED cube — The Mint's best perk isn't one you'd find touted on its website: the attention-grabbing clientele. Scope out the danceteria's typical Friday and Saturday mix and you're guaranteed to spy practically every niche of the Scottsdale crowd parading through. High-octane eye candy and hot bods are everywhere out on the patio, not to mention such clubgoing curiosities as dudes sporting Stunna shades like they're Jay-Z, hipsters in bowties and porkpies, and a few roaming bachelorette parties armed with squirtguns and feather boas. The ebb and flow of the dancing and romancing scene underneath glowing crossbeams usually features girls grinding on one another and at least three human trainwrecks in Forever 21 attempting to go-go dance atop VIP couches. While the cover charges at The Mint vary, the floor show's always free. 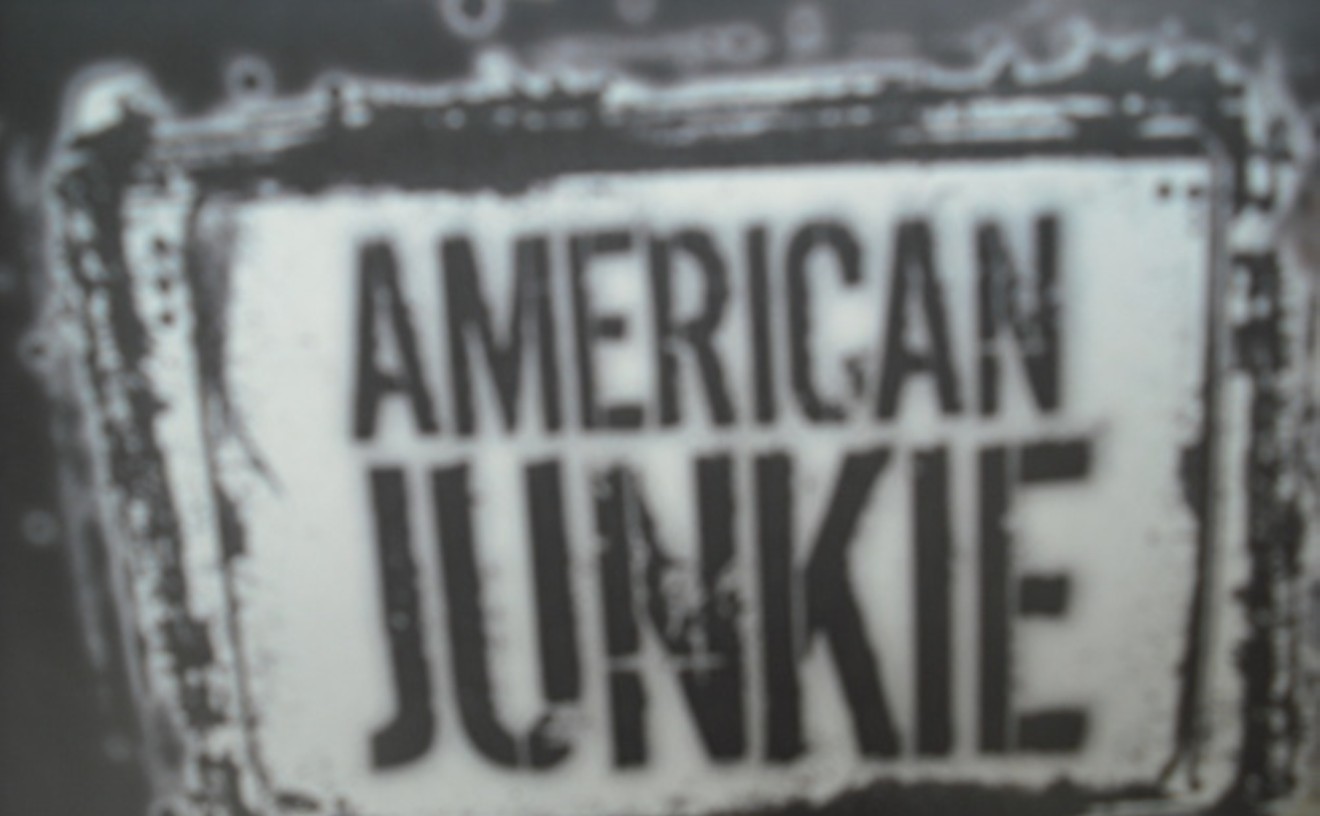 The art of seduction is a tricky one to master, which is probably why there've been enough books written about picking up the opposite sex to fill an entire library. One thing is certain: It helps to have the odds stacked in your favor, which is why we recommend marshaling the wingmen and testing out your game at American Junkie. There's a distinct libidinous atmosphere to the place, which is where dudes and dames in the 'Dale go to get down and hook up. Everyone's inhibitions seem to get checked at the door, fleeting glances and flirtatious behavior are the norm, and the bartenders constantly cajole girls to spin the wheel of booze for free shots. The small dance floor offers the excuse to get close to that certain someone and conduct a vertical expression of a horizontal desire. And if you do get lucky, there are fleets of cabs waiting outside for a quick getaway to either your place or theirs. A few even offer free rides back to your car the next day, which should make the dreaded morning escape a bit easier.