The truth is out there. And those in pursuit of answers need search no further than the annual International UFO Congress. No longer are its sci-fi topics of convo confined to Fox, Mulder, and your crackpot uncle who totally saw the Phoenix Lights. These days, skeptics and scientists gather to learn about ancient civilizations, archeology, UFOlogy, and paranormal phenomena from guest speakers and an accompanying film festival. The next festival is scheduled from February 27 to March 3, 2013.

Test out your theories, and there's a fair chance you'll find some science reality in your favorite science fiction. Toss in some hypnotheraphy, extraterrestrial communication theories, and potential evidence of life on other planets, and you're in for a week of brain-bending weird science.

Although Ms. Frizzle and her school bus of inquisitive students would fit right in roaming through the Arizona Science Center on a field trip, grownups should note that the museum features much more than basic kid-size bites of knowledge. And every First Friday, they can leave the little ones with the sitter, as the museum's doors open for Adult's Night Out, a kid-free evening of science and socializing. Prep your brain for some scientific stimulation by way of a lecture on an engrossing topic (past ones include the future of space exploration and art's role in collective, societal knowledge), an IMAX film screening, and self-guided tours of the museum.

Best Way to Prepare for a Zombie Invasion

Up until earlier this year, zombies were nothing more than a popular — if overused — thematic device in movies like 28 Days Later and such television shows as The Walking Dead. Then all these freakazoid drug addicts began turning into insane, flesh-biting cannibals after sniffing bath salts, which caused us to wonder if somehow the undead could actually stagger out of the fictional realm and into the real world. Needless to say, we plan to be ready with a shotgun in hand in case a herd of hungry brain-munchers comes crashing through our front door.

In order to prep ourselves for this day of the dead, we've been attending meetings of the Phoenix chapter of the Zombie Research Society. At each and every confab, the members of this local spin-off of the tongue-and-cheek national organization aim to raise awareness of a potential zombie apocalypse. At past meetings, attendees have learned the most effective ways to fell the undead, including the use of both firearms and household objects. Organizers also have provided info on what Valley locations can be used for hideouts and some of the pseudo-science behind zombies. In addition to all the humorous material, legit desert-survival skills (like water purification) have been offered, so at least you won't go thirsty while on the run from some ravenous reanimated creature.

Best Use of Technology in a Museum 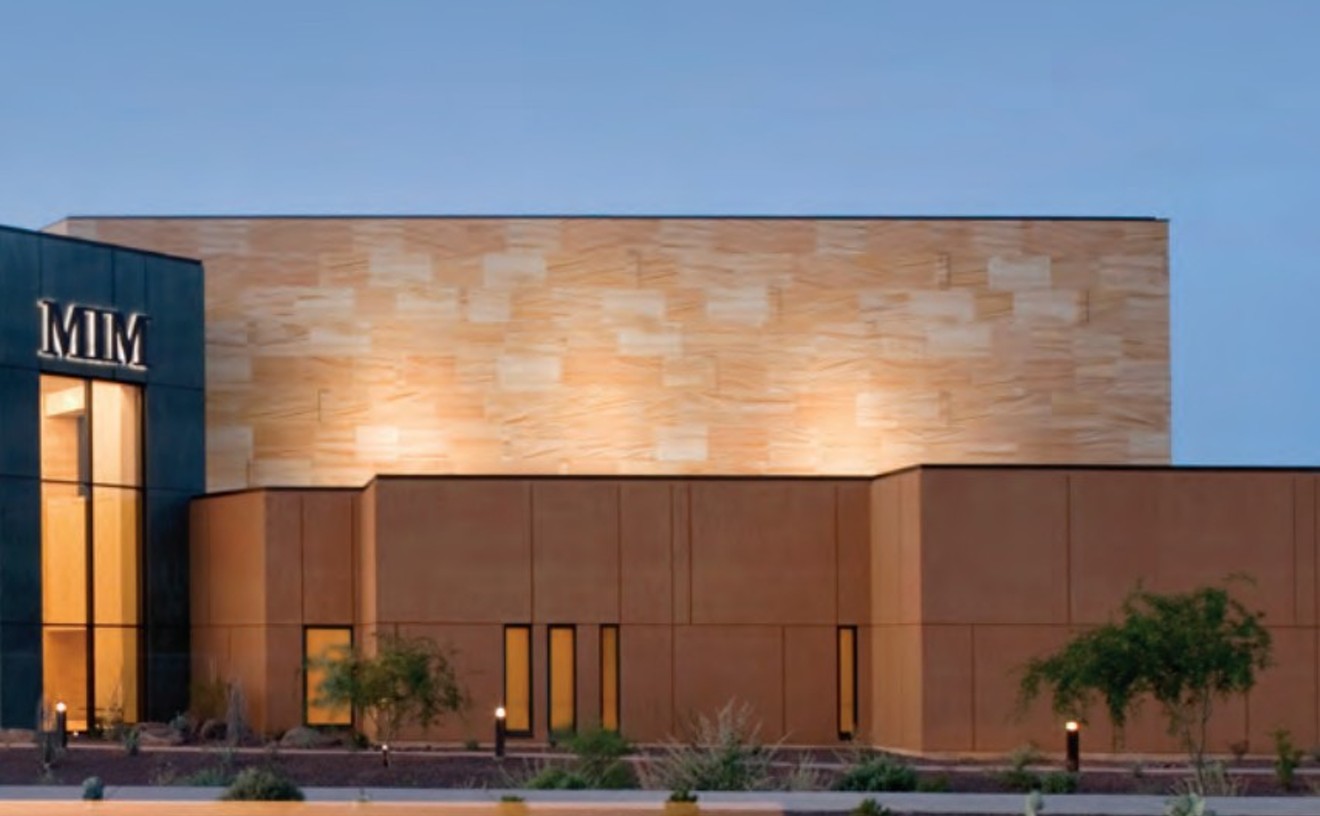 If there's one thing all generations agree on, it's that the best education happens when you're having a wonderful time, completely unaware that you're learning stuff. Each display in the Musical Instrument Museum magically senses when you and your headphones approach and plays the appropriate video and audio. You don't have to do anything, and a brilliant floor plan keeps it from getting confusing. The gorgeous building's full of entertaining performances and demonstrations, hands-on experiences, a top-notch café, and a dollop of celebrity worship, not to mention more than 15,000 instruments from hundreds of cultures — feasts for all five senses, and something for everyone.

Best Performance by a Robot in a Supporting Role

Whenever Elizabeth Meriwether's Heddatron is produced, the biggest of the play's challenges is coming up with five robots that, among other things, perform the opening scene of Henrik Ibsen's Hedda Gabler. As well as finessing time and budget constraints, Stray Cat Theatre had to reach out from their own weird little community to the weird little robotics community. Designers Tim Gerrits and AJ Hernandez and a crew of plucky remote-control operators made it happen. The mecha actors were all classy, but our favorite was Aunt Julie-Bot, who is invited to sit down, bumps into a chair several times, and finally replies, "No, thank you." Nailed it!

ASU Ph.D. candidate Courtney Brown's re-creation (thanks to fossils, CT scans, and 3D printing) of a Corythosaurus dinosaur skull and nasal passages, with a mechanical larynx that performers blow into to approximate the sound the animal made, is pretty cool just to think about. Once you've pulled up the video and listened to the prehistoric-style cries, though, your mind will be entirely blown. Brown has beaucoup other advanced musical projects on her plate — like her Weimar-influenced electronic cabaret act that's "designed so that the performer will fail" — but keep an eye out for when the little guy will be bellowing in public again this academic year.

Performance art per se has enjoyed isolated heydays on the Phoenix culture scene, and a new wave is cresting thanks to some genuinely experimental organizations, including Matthew Watkins' Orange Theatre Group. With cameras, microphones, and computers getting smaller and more affordable all the time, technology plays a vital role in sucking Orange's audiences in and then disturbing and disorienting them, as intended. Whether actors appear to be digging graves, peeing in toilets, chugging cough syrup, or writhing on the floor crooning Europop, the media tracks reveal perspectives and amplify secrets that add layers to the live performance, creating something that's hauntingly thought-provoking — and surprisingly beautiful.

The researchers and scholars involved with the Meteorite Vault at Arizona State University have a Chicken Little complex. Sure, we've all claimed the sky's falling on our worst days and when we've had a little too much doomsday punch, but these academics have the rocks to prove it. In 1960, ASU purchased more than 700 meteorite samples from amateur meteorite hunter H.H. Nininger. Since, the collection has grown to more than 10,000 samples from more than 1,650 meteorite falls around the world, including a rare Martian meteorite that fell in southern Morocco in 2011 (the first Martian fall in 50 years). The Center for Meteorite Studies is now the world's largest university-based meteorite collection, hosting important data used by geological and space-oriented scientists around the world. And as soon as they brush up the collection and reopen to the public, they're promising to put on a real rock show. 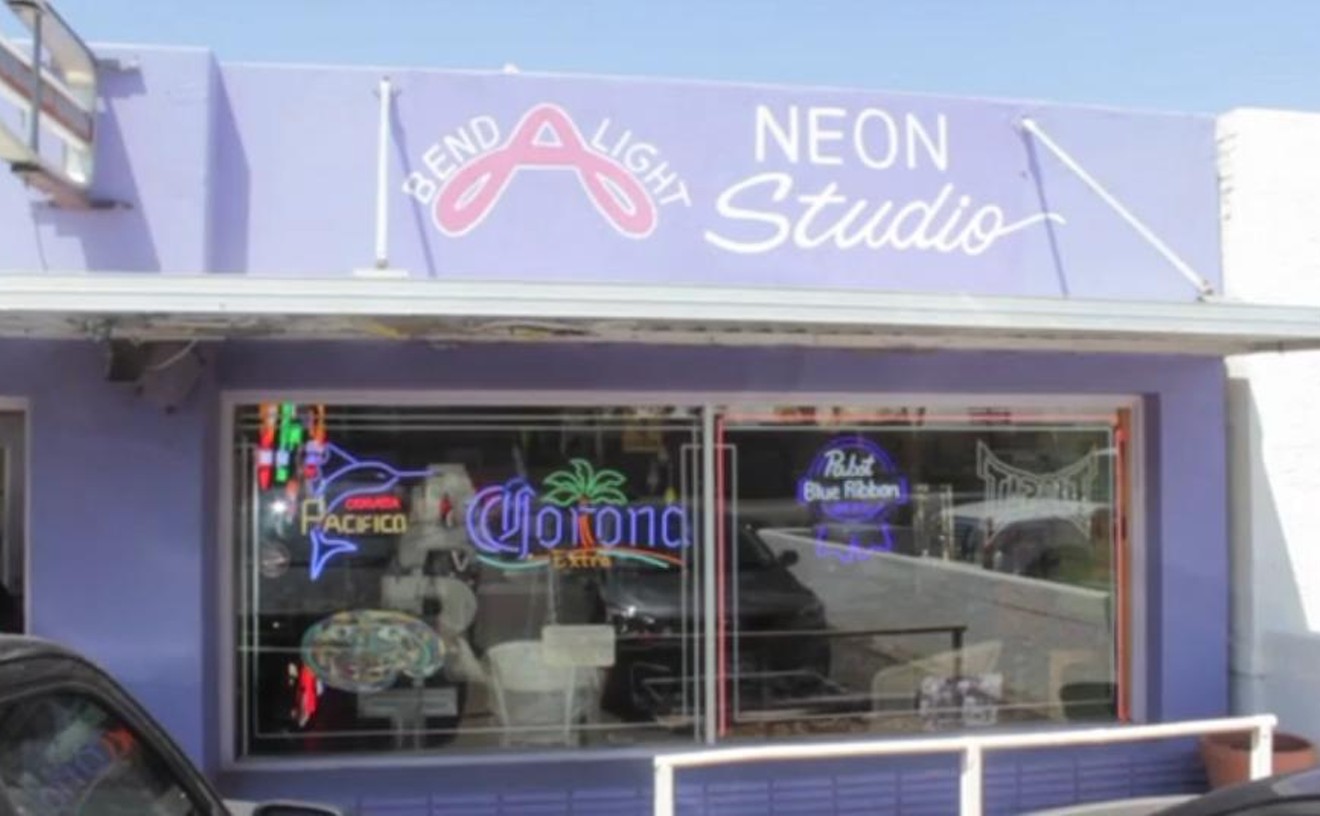 Phoenix-based neon artist is not a career for the faint of anything. In the summertime, it's more than 120 degrees in Sue Meyers' studio. She's not running the A/C and she says a swamp cooler won't cut it because during the day, she's using 1,800-degree flames to mold, craft, and twist glass tubes that she'll fit and light to create neon signs and sculptures for businesses and "vintage" art fiends around the country. Meyers says she's been fascinated by neon since she was a kid and would go with her mom on trips to Las Vegas. In the early '90s, she took a neon class, and later ditched her commercial design gig to pursue what she knows is a temperamental industry full-time. Today, she's fighting the growing popularity of LED, not to mention the dangers of molding glass and working with neon in pure form, but she'll assure you that while her process is anything but cool, her product is exactly that. See a video of Meyers' work.

There's a buzz in the science community these days. Led by Dr. Gro Amdam, a team of scientists based mostly at Arizona State University recently published its cool findings — that older bees actually can reverse brain aging when they do work normally done by their younger comrades. The team also discovered a physical change in proteins in the bees' little brains — including one protein also found in humans that can help protect against dementia. So, you ask, how does any of this relate to us two-legged types? Well, down the road, researchers might be able to create a drug that can help folks maintain brain function. Genius!